By: Christopher Lydon
For: Brass quartet
This music is in your basket
View basket
Loading... 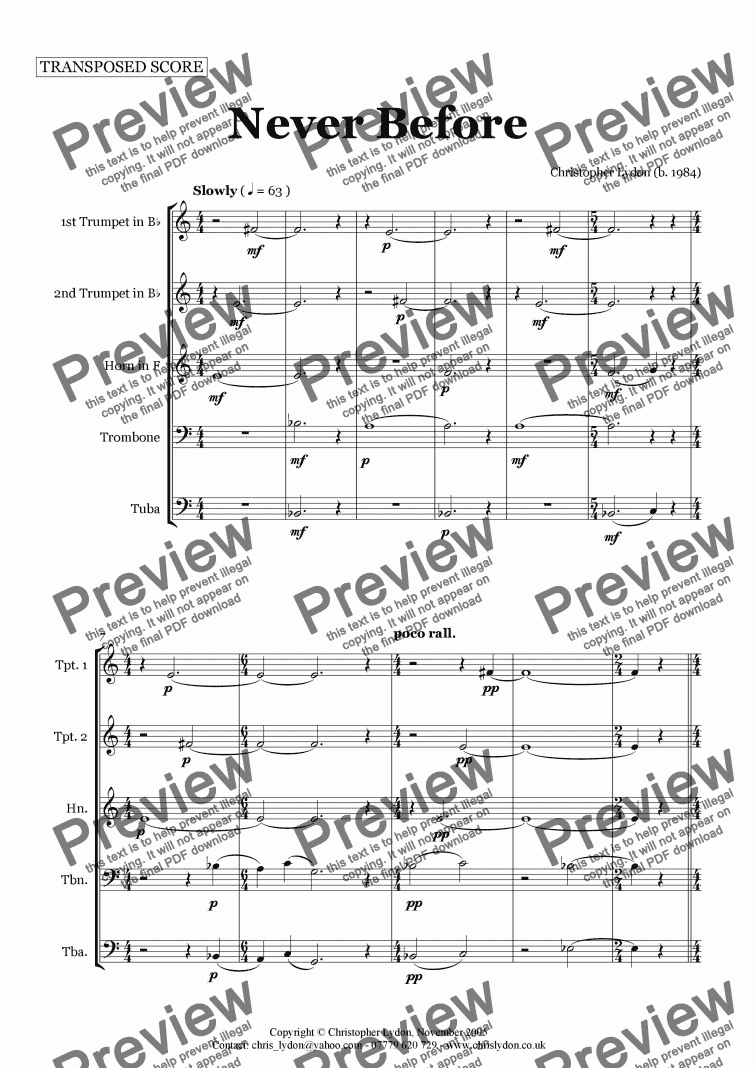 By: Christopher Lydon
For: Brass quartet

Composer
Christopher Lydon
Year of composition
2005
Lyricist
none
Difficulty
Easy (Grades 1-3)
Duration
6 minutes
Genre
Modern classical music
License details
For anything not permitted by the above licence then you should contact the publisher first to obtain permission.

I was commissioned to write this piece in October 2005 for a special purpose: a group of my friends (all music degree students at The University of Manchester) were organising a sponsored "Grade-1-athon".

They were all picking an instrument to learn that they had never played before and were teaching each other these instruments with the aim of passing their grade 1 exam in a couple of months, and getting sponsored to do so.

They also wanted to put on a concert showcasing all the new talents that had been forged. There were enough players (almost) for a brass quintet to be formed, and I was asked to write a piece for them.

A tricky task, but a pleasant one nonetheless. I was asked to write a piece which was 5 or 6 minutes long (even though most grade one pieces are no longer than 30 seconds!).

It was an interesting challenge - I knew these people were all very musical (in reading and performance) but would be limited (very limited in some cases) with actual skill on their instrument. So I tried to choose themes that would be easy to play, but still musically interesting, which used only the notes required from the grade one syllabus. (As it happens, a few extra notes crept in.)

In the end, the piece was much harder than I had intended (both range and complexity) but the group that performed it did a sterling job - the first trumpet player nailed her part with no problems (and she was really a 'cellist!).

The tuba part was the exception - nobody wanted to learn the tuba, so a "normal" player was brought in, hence the tuba part being of a much extended range than required in grade one and much more complicated technically than would be required of a grade one tuba player.

Maybe this piece will be of use to another group of similar people some time? I provide parts as is, but I certainly wouldn't be averse to re-jigging it for another particular group - please contact me.

Reviews of Never Before

Sorry, there's no reviews of this score yet. Please .
In order to submit this score to ScoreExchange.com Christopher Lydon has declared that they own the copyright to this work in its entirety or that they have been granted permission from the copyright holder to use their work. If you believe that this score should be not available here because it infringes your or someone elses copyright, please report this score using the copyright abuse form.