By: Keith Terrett
For: String orchestra
This music is in your basket
View basket
Loading... 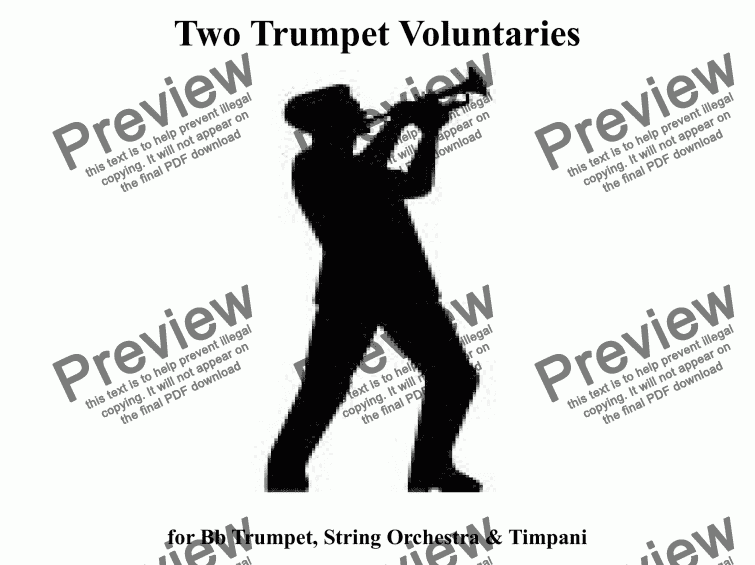 By: Keith Terrett
For: String orchestra

Composer
Keith Terrett
Arranger
Keith Terrett
Year of arrangement
2014
Publisher
Music for all Occasions
Difficulty
Difficult (Grades 7+)
Duration
3 minutes
Genre
Classical music
License details
For anything not permitted by the above licence then you should contact the publisher first to obtain permission.

An arrangement of my popular ''Two Trumpet Voluntaries'', set in the key of C concert for solo Trumpet & Strings.

A good key for trumpeters not wishing to play in the extreme clarino register!

The Prince of Denmark's March, commonly but erroneously called the Trumpet Voluntary, is a musical composition written about 1699 by Jeremiah Clarke, the first organist of the then newly rebuilt St Paul's Cathedral.

For many years, the piece was attributed incorrectly to his elder, and more widely known, contemporary, Henry Purcell, who was organist of Westminster Abbey. The misattribution emanated from an arrangement for organ published in the 1870s by Dr. William Spark, then town organist of Leeds, England. It was later adopted by Sir Henry Wood in his well known arrangement for trumpet, string orchestra, and organ.

The march is very popular as wedding music; it was played during the wedding of Lady Diana Spencer and Prince Charles in St Paul's Cathedral. It was broadcast often by the BBC during World War II, especially when programming was directed to occupied Denmark.

A brief portion of the tune can be heard at the end of the Chumbawamba song "Tubthumping" and in the fade-out of The Beatles' song "It's All Too Much". It was also one of the seventeen classical pieces used in creating the lead track of the 1981 Hooked on Classics project.