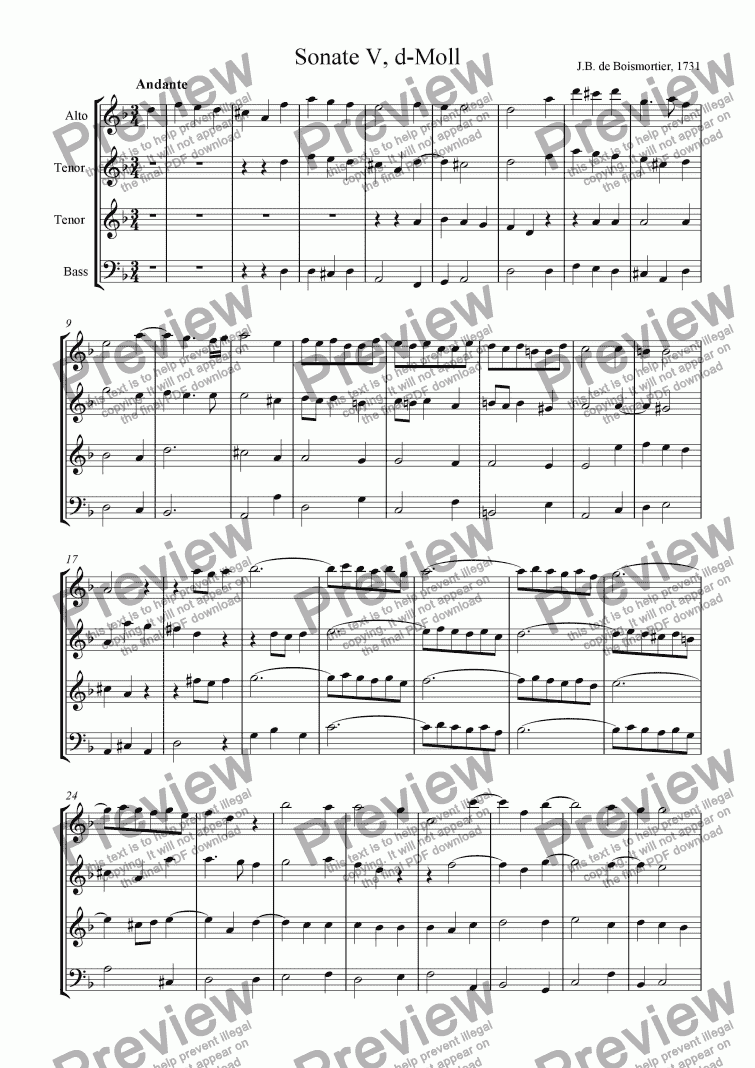 This is a very pleasant piece of music that I've played very often with the JACD-recorder quartet. It contains four parts:

Joseph Bodin de Boismortier was among the most popular composers of 18th-century France. He was born in the town of Perpignan and relocated to Paris in about 1724. In the years that followed, he published over one hundred and two major works, all written with an eye on popularity. They were printed and reprinted providing him with enormous wealth. His wealth and success made him the butt of many jokes amongst the musical establishment and posterity has judged him harshly. Nevertheless, many of his works were heard at the performances of the Concert Spirituel and his motet of 1741, "Fugit nox", became a fixture at that ensemble's Christmas performances for over twenty years.

Although his works aimed to please listeners, Boismortier was knowledgeable composer: he was, for instance, the first French composer to work within the new Italian innovation, the concerto. He used it for the first time when writing the Six Concertos for Five Flutes which appeared in 1727 (when the composer was 38). It was also to be his first exercise in writing works in three movements - fast, slow, fast. By today's standard they were very short, little more than a good melodic idea, but they do demonstrate a knowledge of how to skilfully use five instruments of the same kind to produce such varying tonal colours.

In order to submit this score to ScoreExchange.com David Jimmink has declared that they own the copyright to this work in its entirety or that they have been granted permission from the copyright holder to use their work. If you believe that this score should be not available here because it infringes your or someone elses copyright, please report this score using the copyright abuse form.

Reviews of Sonata in d-Minor