By: Ananda Samarakoon
For: String orchestra
This music is in your basket
View basket
Loading... 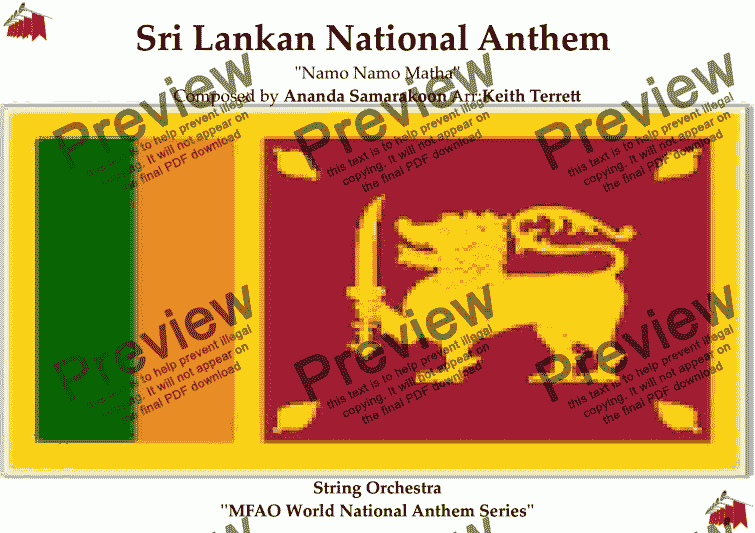 By: Ananda Samarakoon
For: String orchestra

Composer
Ananda Samarakoon
Year of composition
1948
Arranger
Keith Terrett
Year of arrangement
2020
Publisher
Music for all Occasions
Difficulty
Easy (Grades 1-3)
Duration
2 minutes
Genre
Classical music
License details
For anything not permitted by the above licence then you should contact the publisher first to obtain permission.

An arrangement for String Orchestra of the national anthem of Sri Lanka.

After independence was granted to Sri Lanka (at the time known as Ceylon) in 1948, the need for a national anthem arose. As a result of a contest, Ananda Samarkone’s contribution, written in Sinhala, was chosen as the new anthem. It was first performed on the fourth anniversary of independence in early 1952. There was some controversy with the early lyrics, and they were slightly changed in the early 1960s, against the author’s wishes.

Need an anthem fast? They are ALL in my store! All my anthem arrangements are also available for Orchestra, Recorders, Saxophones, Wind, Brass and Flexible band. If you need an anthem urgently for an instrumentation not in my store, let me know via e-mail, and I will arrange it for you FOC if possible! keithterrett@gmail.com﻿