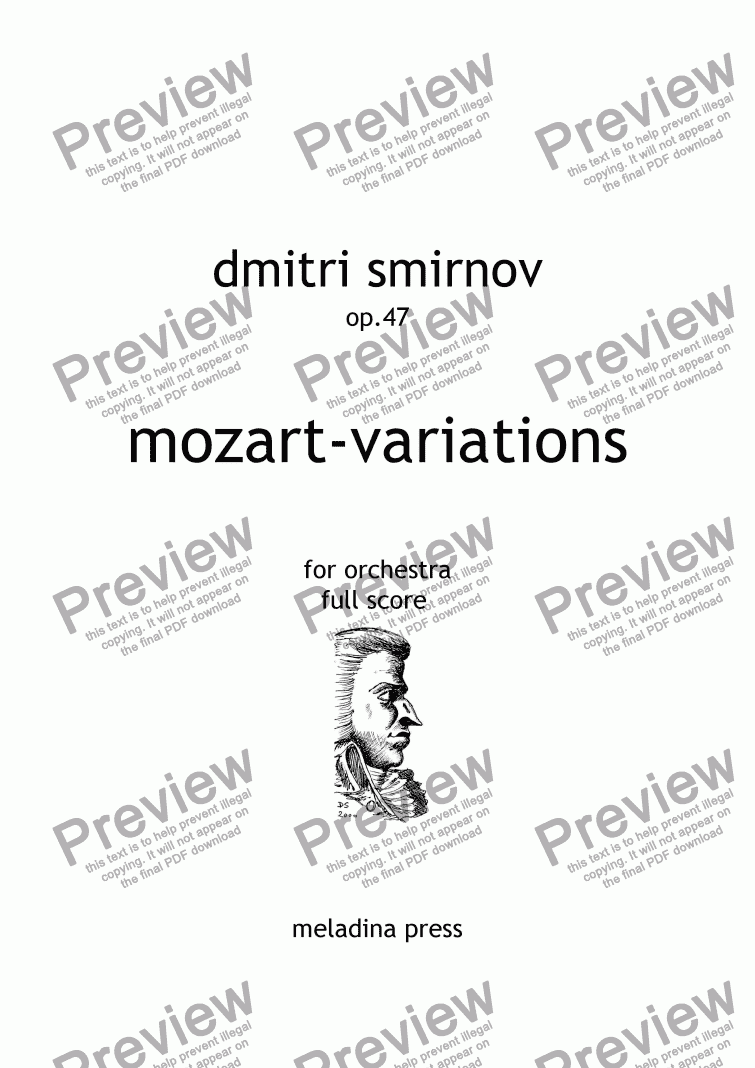 The opening passage of the development section in the Finale of the G minor Symphony by Mozart (K.550, 1788) is one of the most striking examples of conscious use of the idea of 12-tone technique which was invented only 135 years later and dominated almost all 20th century. If to omit a few repeated notes, we will receive the row: Bb-D-F-A-Db-C-E-G#-B-Eb-F#, in which only one note is missing: "G" � the keynote of the Symphony. And for that was a special reason to be as far away as possible from the tonal centre of the piece particularly here at this point of the form. This 8-bar passage I took as the first music idea (A) for my cycle of variations and the next two bars as the second idea (B). Both themes and 35 contrast variations outline the contours of a sonata form. Theme A and Variation I together are forming the Main subject. Theme B and Variations II-VII represent the Transition. Variations VIII-XV constitute the Secondary subject-group and Codetta. The Development section includes Variations XVI-XXVIII. And Variations XXIX-XXXV make the Recapitulation and Coda. The music scored for the same Mozartian Orchestra but the Flute changes into Piccolo, Oboe II into Cor anglais, Clarinet II into Bass Clarinet and Bassoon II into Contrabassoon. Every group of Strings is divided into 4. But for the Double Bass part here I provide the unison version and even a Double Bass solo can play it. The piece had repeated performances in Russia, Germany, England and USA. Together with music of W. A. Mozart and Alfred Schnittke this piece was included into the ballet MOZ-ART by Valerie Aris and Beate Rygiert, which was premiered on the 15th of March 1992 at Phorzheimer Stadtteater, Germany.

Reviews of MOZART-VARIATIONS op47 for orchestra