The Heather Furzed Highlands in E Major For Orchestra, Choir and Bagpipes

By: Peter Dewar-Finch
For: Orchestra
This music is in your basket
View basket
Loading... 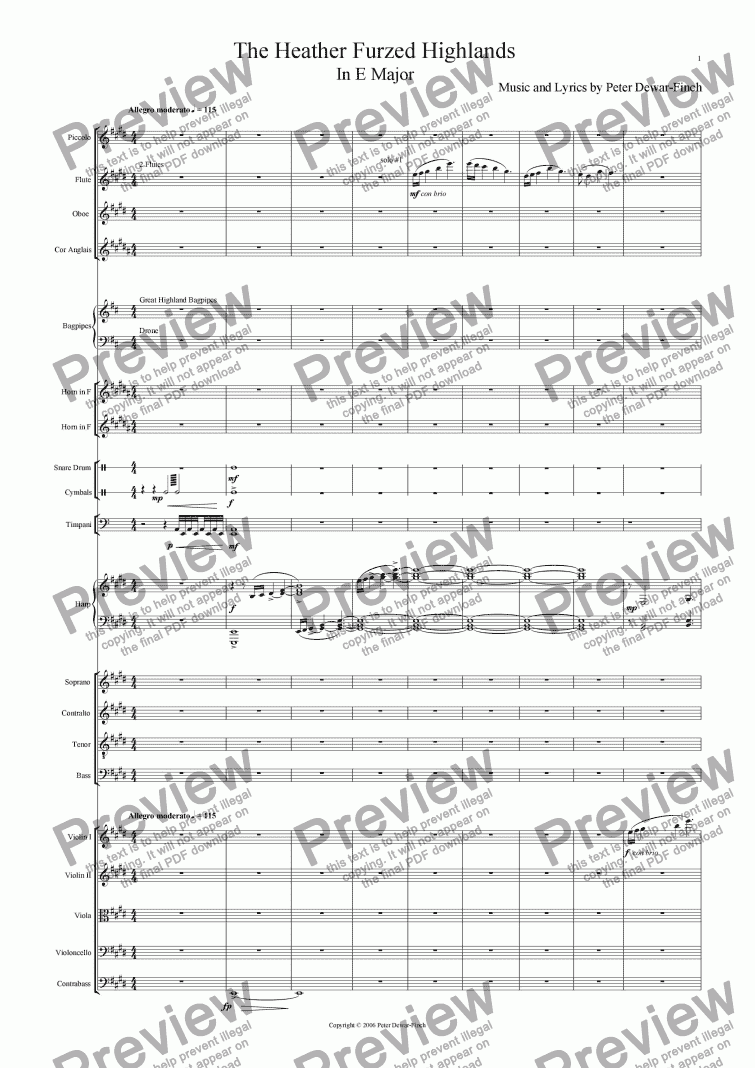 The Heather Furzed Highlands in E Major For Orchestra, Choir and Bagpipes

By: Peter Dewar-Finch
For: Orchestra

Composer
Peter Dewar-Finch
Year of composition
2006
Lyricist
Peter Dewar-Finch
Difficulty
Difficult (Grades 7+)
Duration
7 minutes
Genre
Modern classical music
License details
For anything not permitted by the above licence then you should contact the publisher first to obtain permission.

Since adding choral verses to this piece It represents my entry for the informal Scottish National Anthem Competition.

I�ve long been a supporter of an independent Scotland after recovering the losses sustained under United Kingdom kings since George the first and the disaster of Culloden.

I am descended, on my father�s side of my family, from Clan Donald, (the Clan home of MacDonald still being on Skye). I spent a lot of time in Inverness during the 1970�s and travelled the area extensively, very often as far as the Western Isles.

The land which I know, and love, inspired me to write a piece of music in personal celebration of it, indeed my wife, herself a Dewar Coigerach, said that she could �smell the heather and feel the wind blow� in my piece of music!

I envisioned one of my numerous journeys across the Highlands from Moray Firth to Skye (the home of my ancestors) and illustrated it in the piece.

It is a piece, which I believe, is not only rousing, but inspiring and looks entirely to the future. Possibly a future, of dare I say, a reborn Scotland, with the restoration of it�s lands from the English Lairds who were given them by King George after the Highland clearances of the time.

When I heard that Scotland might want a new National anthem in the future I composed a poem of my thoughts to fit the music. The poem basically encapsulates the history of Scotland, the Highland clearances, migrations to Canada, America and other places, and looking forward to a time when the land can be reclaimed and put to good use by returning exiles.

I am not one of those who subscribe to an irrelevant, backward looking ballad from Scotland�s past. Most people will cling onto these �traditions� for a sense of security, but I believe it is time to move on into a bright new future

Realising that the ideal is for a piece which can fulfil the ceremonial as well as the Nationalistic �The Heather Furzed Highlands� is basically a seven and a half minute piece in three parts using the one connecting theme and melody.

The first section emphasises the orchestral character. (Though there is no reason why it cannot be transcribed entirely for Bagpipes.)

The second section is the proposed Scottish Anthem scored for choir, rather than a solo voice; As Nation is about �the many� and not the few, I have, I hope, installed a tune which is memorable and singable by almost anyone. A choir implies this. The sentiment, I hope, strikes a sympathetic chord.

This sweeps majestically into a rousing reiteration of the first part but with a renewed air of vigour, indicative of a re-born Scotland, using the bagpipes to traditional and rousing effect.

I�m sure there are better poets in Scotland than me, Anyway, here�s my effort:

�From shining sea to shining sea Culloden bore the shame, But now, the time is near the Saltaire and the Lion, their enemies will tame, The united Clans of Scotland bold return to pastures old, The heather furzed Highlands will be again the people�s Throne.�

Reviews of The Heather Furzed Highlands in E Major For Orchestra, Choir and Bagpipes