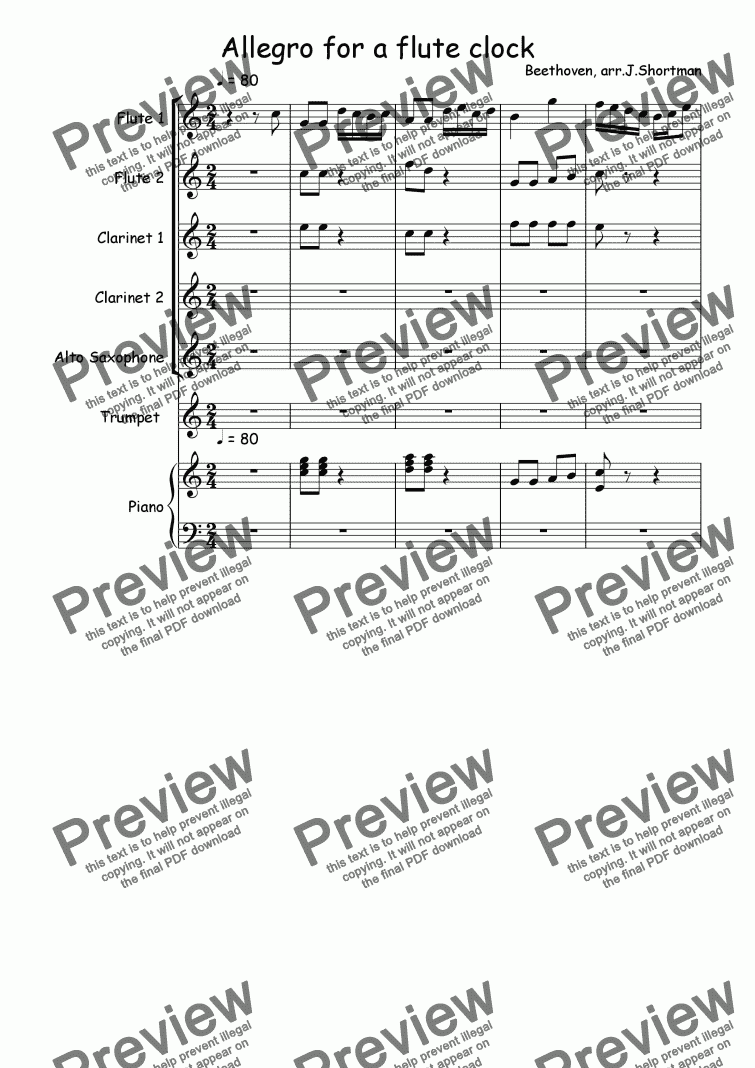 Ever since musical instruments were invented, people have tried to invent instruments which can play by themselves. The oldest surviving mechanical musical instruments are the glockenspiels which sat in clocks in the late Middle Ages. In the 18th century the flute clock was invented, for which Haydn, Mozart and Beethoven all wrote original compositions. This piece belong to a set of five compositions that Beethoven wrote for a flute clock which was displayed in an art exhibition in Vienna. It was composed sometime between 1792 and 1799, and has been arranged in this version for a beginner’s Wind Band.

THIS SCORE WAS PREVIOUSLY AVAILABLE FOR FREE (until ScoreExchange updated their terms/conditions on 1/12/17. IF YOU WOULD LIKE IT TO BE FREE AGAIN, PLEASE E-MAIL ScoreExchange AND EXPRESS YOUR DISAPPOINTMENT AT NOT ALLOWING COMPOSERS TO SHARE COMPOSITIONS/ARRANGEMENTS FREE OF CHARGE. IN THE MEANTIME, ANY PROCEEDS FROM THE SALE OF THIS SCORE WILL BE DONATED TO CHARITY.

In order to submit this score to ScoreExchange.com Julian Shortman has declared that they own the copyright to this work in its entirety or that they have been granted permission from the copyright holder to use their work. If you believe that this score should be not available here because it infringes your or someone elses copyright, please report this score using the copyright abuse form.