By: Darin Templeton
For: Large mixed ensemble
This music is in your basket
View basket
Loading... 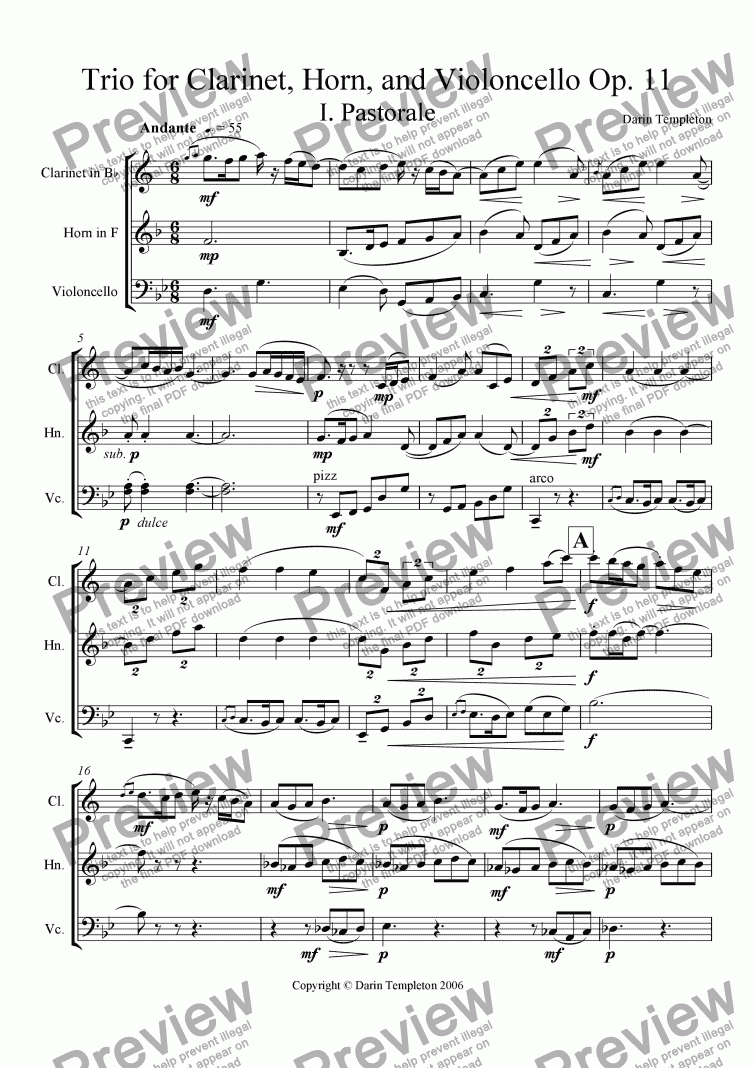 Composer
Darin Templeton
Year of composition
2006
Lyricist
none
Difficulty
Difficult (Grades 7+)
Duration
14 minutes
Genre
Modern classical music
License details
For anything not permitted by the above licence then you should contact the publisher first to obtain permission.

I. Pastorale. Commissioned by clarinettist Melanie Morley. Though this piece is not officially programmatic, I intended to capture the feeling of an idyllic journey as the title would suggest. This is a contrapuntal, motivic piece which is classical in structure but contemporary in its tonal language. Extended harmonies prevail. There is much use of parallel harmonies as a blurring of the surface, though parallel voicings are avoided through inversion. Motifs are often fragmented or rhythmically displaced. There is much rhythmic conflict between the three instruments. The 6/8 time signature is often pulled by contrasting meters (often multiple simultaneous hemiolas).

The structure is sonata form. A fairly large amount of opening material is presented and brought to a climax through rhythmic tension. This material is then developed upon repeat. A transition brings forth a new key and the second theme in the cello. This theme is taken over by the clarinet and horn in canon before the exposition is repeated. The second repeat is some 20 measures shorter than the first, landing in yet a new key as a series of developmental episodes begins. A �false recapitulation� occurs in the dominant key and is immediately broken down, followed by more development. When the actual recapitulation does occur, it is under guise- similar to the episodes that came before. The transition remains but now modulates to the relative minor key instead of the chromatic 3rd as in the exposition. Finally, the second theme changes mode and assumes the home key. The movement is brought to a close with a coda.

II. Danza Grottesco This piece uses the dance and trio form and provides a light, humorous contrast to the first movement. The agitated folk-dance theme undergoes variation throughout the piece. A change of texture occurs in the second half, with the motif poking through pointillist rhythms and alternating meters. The lyrical trio is an abrupt departure from anything that came before, though the opening theme does appear in fragmented form. The da capo repeat ends with a coda.

I'm not aware of any other existing works for this combination of instruments. If anyone knows of other pieces specifically for clarinet, horn, and cello, please email me- I know musicians that would be interested to learn of this repertoire. Thanks.

Sorry, there's no reviews of this score yet. Please .
In order to submit this score to ScoreExchange.com Darin Templeton has declared that they own the copyright to this work in its entirety or that they have been granted permission from the copyright holder to use their work. If you believe that this score should be not available here because it infringes your or someone elses copyright, please report this score using the copyright abuse form.