On Ilkley Moor Baht 'At 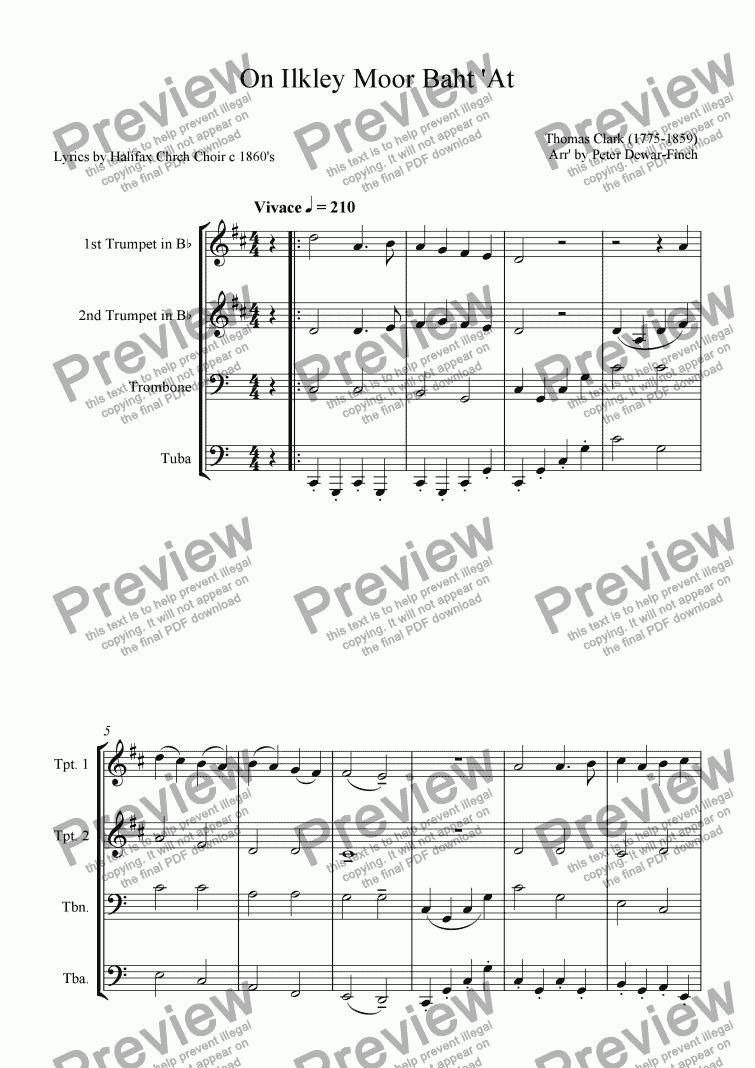 Here is a tune which has long been a brass band favourite. �On Ilkley Moor Baht 'At." is a popular song in the county of Yorkshire, United Kingdom. It is based on the old Methodist hymn tune "Cranbrook" composed in 1805 by shoemaker, choirmaster and classical composer Thomas Clark (1775-1859) of Canterbury in Kent. My Brass arrangement is for 2 trumpets in B flat, a trombone and a tuba.

The words of "On Ilkla Moor Baht �at" were composed in the 1860�s - according to tradition - by a church choir from Halifax during the course of a jocular picnic beneath the famous Cow and Calf Rocks. The song tells of a lover courting the object of his affections, Mary Jane, on Ilkley Moor without a hat (baht 'at). The singer, chides the lover for his lack of headwear - for the cold winds of Ilkley Moor will mean his death from exposure. This will in turn require his burial, the eating of his corpse by worms, the eating of the worms by ducks and finally the eating of the ducks by the singer. A great deal about Yorkshire folk can be determined by close analysis of this song.

Personally, I�ve never known anyone to die from a head cold. But, here is a salutary lesson for all those who go walking on Ilkley Moor (or anywhere for that matter) without their hat on.

For a song that aspires to become the National Anthem of West Yorkshire, the words are more than just a bit silly, but perhaps it is pertinent as it strives to save the economy of the country by ensuring that people don�t take unnecessary time off work with head colds.

It is written in dialect, so good luck with it! (The phrase: �Baht 'at� translates into modern English as �Without a hat.�.)

The song has become so popular that the origin of the music as the hymn tune �Cranbrook� has been almost forgotten. The effect of singing traditional words to the tune is now too comical for performance in church, but for those who might be interested you may find them, - and the tune, in the links below:

Original Words to Thomas Clark�s Hymn �Cranbrook� upon which �On Ilkley Moor Baht �At� is based: www.cpdl.org/wiki/index.php/Cranbrook_%28Grace_%27tis_a_charming_sound%29_%28Thomas_Clark%29

Original tune to Cranbrook: WMP will open if present. www.wgma.org.uk/PandG/standard/cran.mid

Finally: As the poem seems incomplete, I have composed a final verse myself:

Reviews of On Ilkley Moor Baht 'At