The Girl With the Flaxen Hair for Brass Quintet

By: Claude Debussy
For: Brass quintet
This music is in your basket
View basket
Loading... 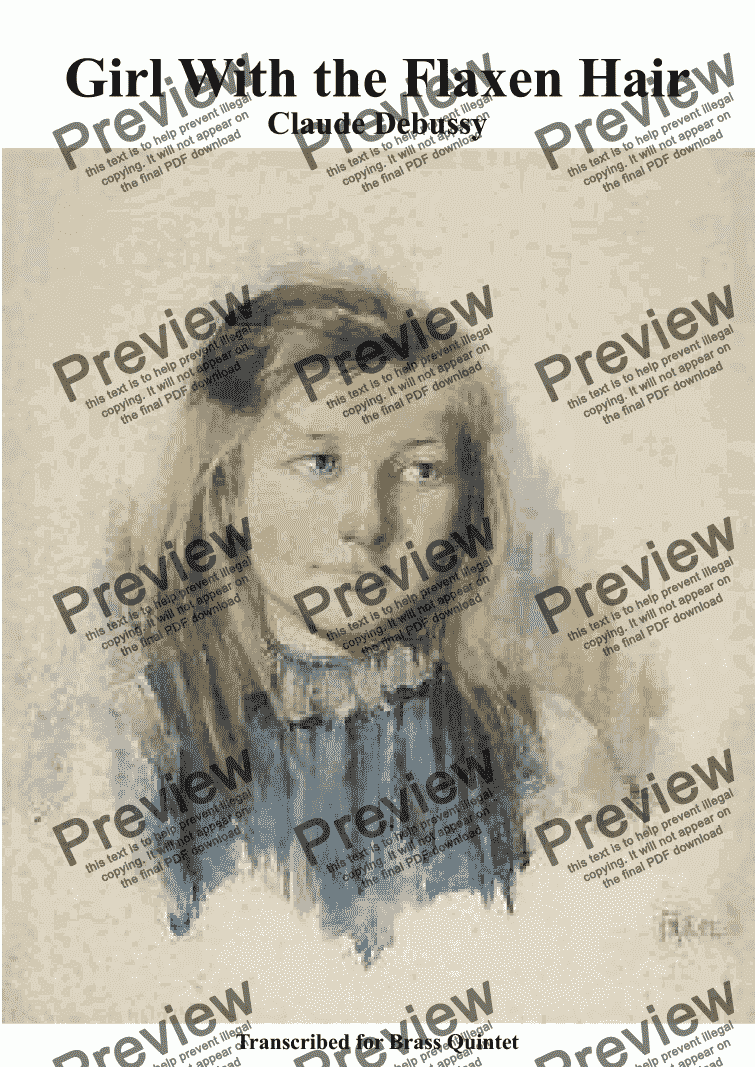 The Girl With the Flaxen Hair for Brass Quintet

By: Claude Debussy
For: Brass quintet

Composer
Claude Debussy
Year of composition
1888
Publisher
Music for all Occasions
Difficulty
Moderate (Grades 4-6)
Duration
2 minutes
Genre
Classical music
License details
For anything not permitted by the above licence then you should contact the publisher first to obtain permission.

Transcribed for Brass Quintet, La fille aux cheveux de lin is a musical composition for solo piano by French composer Claude Debussy. It is the eighth piece in the composer's first book of Préludes, written between late 1909 and early 1910. The title is in French and translates roughly to "The Girl with the Flaxen Hair". The piece is 39 measures long and takes approximately two and a half minutes to play. It is in the key of G♭ major.

The piece, named after the eponymous poem by Leconte de Lisle, is known for its musical simplicity, a divergence from Debussy's style at the time. Completed in January 1910, it was published three months later and premiered in June of that same year. The prelude is one of Debussy's most recorded pieces, both in its original version and in subsequent various arrangements.

The title La fille aux cheveux de lin was inspired by Leconte de Lisle's poem by the same name, one of his Chansons écossaises (Scottish songs) from his 1852 collection Poèmes antiques (Ancient Poems). The image of a girl with flaxen-coloured hair has been utilized in fine art as a symbol of innocence and naivety. Musical writers have suggested that Debussy's successful portrayal of these emotions was tied in with the musical simplicity of the prelude—specifically, the technical and harmonic elements. His choice of simplicity for this piece was highly unusual, since it deviated from his style at the time and brought back the simple harmonies that he had utilized in his earlier musical compositions, which were more traditional.

Debussy had previously utilized the title for a mélodie he wrote from 1882 to 1884.[5] However, it does not feature any similarities to the 1910 prelude,[2] and merely has a "distant familial relationship" with the prelude at most according to James R. Briscoe in the music journal 19th-Century Music. The song, which is one of his earlier works, was dedicated to Marie-Blanche Vasnier. She had an affair with Debussy at the time, and he dedicated most of the compositions he wrote from 1880 to 1884 to her.

Reviews of The Girl With the Flaxen Hair for Brass Quintet