By: Philip R Buttall
For: String orchestra
This music is in your basket
View basket
Loading... 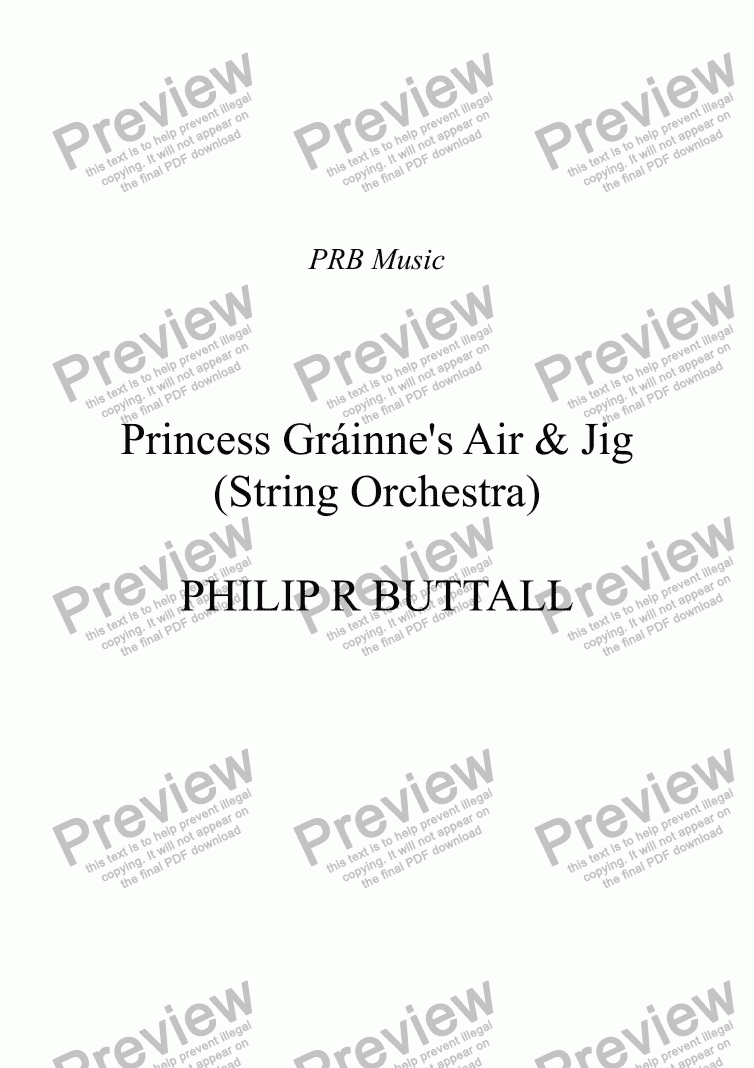 Composer
Philip R Buttall
Year of composition
2006
Publisher
PRB Music
Difficulty
Difficult (Grades 7+)
Duration
4 minutes
Genre
World music
License details
For anything not permitted by the above licence then you should contact the publisher first to obtain permission.

Sadly, Grainne passed away on November 16, 2014 - just days before reaching her 15th birthday.

She was actually born on the 22nd - St Cecilia's Day, patron Saint of Music and Musicians - so her unique spirit will still live on in this, her music.

Otherwise, the programme note below will remain unaltered.

Grainne is, in fact, a lovely soft-coated Irish Wheaten Terrier, who lives with my dear friends, Peter and Roberta, in Bramstedt, a small hamlet south of Bremen, Germany.

Grainne na Dun na nGal, or simply Grainne for short, exhibits all the characteristics of this particular branch of the terrier breed, but also has a unique personality - a lovable, affectionate nature blended with the mischievous fun of the Leprechaun or Little People - a true ’Princess’, then! Hopefully this Air & Jig will conjure up a picture ’in sound’. You could always check out the ’real McCoy’, by calling by, or simply by visiting Grainne’s own website. And, of course, you’ll be able to hear the Jig whilst you’re there, and enjoy all her news and pictures, too - especially the latest adventures of the Wheaten Wagtime Band!

Just to give the piece a little authentic flavour, you might notice a couple of Irish ’tunes’ thrown in for good measure!
The original version was for flute or descant recorder & piano, but this is a special arrangement for the South West Camerata and its director, Fiona McLean (see picture). I met Fiona and her recently-formed ensemble whilst reviewing a concert locally, and, in conversation, Fiona asked if I would consider arranging something for the players.
As I had already made an arrangement for string quartet, for the Callino Quartet from Ireland, it seemed a logical step to reconfigure this for string orchestra, especially as the increased number of parts would allow for a fuller sound.

STOP PRESS
On Thursday August 31, 2006, I was going to a concert in the lovely setting of the Great Hall, Dartington, to review the South West Camerata and Bexley Youth Choir in a combined venture. Imagine my delight to find that the SW Camerata were including Princess Grainne’s Air & Jig in their programme that evening! I knew that they were rehearsing it during their week’s intensive course at this year’s Dartington International Summer School, but until I opened the programme I had absolutely no idea that they were going to give it its First Perfomance that very night! In the event, the young players, under the inspired leadership of violinist, Fiona McLean, gave a wonderful rendition, which seemed to go down really well with the players and audience alike.
In fact I received possibly the ultimate accolade from one of the stewards at the concert who said: This is the first time I’ve heard a new work at Dartington, where the composer was present, and which I actually enjoyed! The point that he was making was that there is always a large number of first performances during each Summer School, and these will almost always be written in a contemporary idiom, which mine certainly is not - a case of horses for courses, I think!
Fiona told me that the SW Camerata is planning to issue its first CD shortly, and Princess Grainne’s Air & Jig is certainly going to be on this! Until then, the attached MP3 file is ’courtesy of’ Garritan Sibelius Edition!