"Baroque Concerto" for Tuba and Piano

By: Warren Wernick
For: Solo Tuba + piano
This music is in your basket
View basket
Loading... 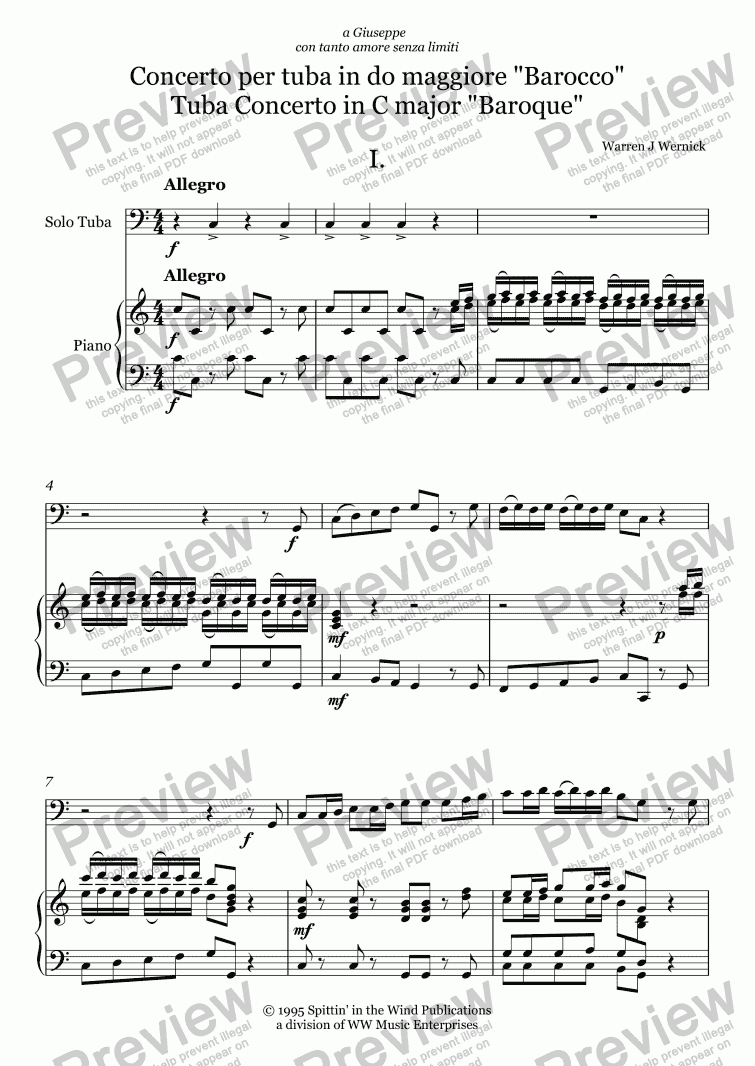 "Baroque Concerto" for Tuba and Piano

Composer
Warren Wernick
Year of composition
1995
Publisher
1962
Difficulty
Difficult (Grades 7+)
Duration
5 minutes
Genre
Classical music
License details
For anything not permitted by the above licence then you should contact the publisher first to obtain permission.

Way back in 1995, sitting alone in the Juilliard cafeteria, nursing a tepid cola beverage (ice cubes to taste) I was thinking about a conversation I had with a tuba player friend of mine about the scarcity - or should I say non-existence - of any Baroque or Classical Tuba repertoire (except, of course, arrangements and transcriptions). This shouldn't have been a surprise to any of us, however, as the modern Tuba as we know it wasn't developed until 1835. Vivaldi died in 1741. So, in a fit of pique, I decided that I was going to compose a Baroque style tuba concerto for my very close tuba playing friend (who mysteriously retired when I informed him of what I was doing). I did everything I could to channel - for lack of a better word - Vivaldi, Corelli, Manfredini, Albinoni, Franchescini, Torelli, and others whose names ended in "i" and compose this "Baroque Concerto" for Tuba. Realizing that any chance of performance was slim to none, and if performed would be seen as a stunt, I set it aside, only to revisit it almost twenty years later. You know what? I really like it and think it would make an effective, fun, recital piece. I know the chance if performance is still slim to none and if performed, will be seen as a stunt, however, I think, as I said, it would be a fun piece to work up. So, dear reader, I give you this little novelty, The "Baroque Concerto" for Tuba and Orchestra (piano reduction). If taken as seriously as possible within the framework of its humorous, satirical and ironic gestures, it will be sure to please audience and performer alike. Be the first to play it - ever!

"Baroque Concerto" for Tuba and Orchestra

Reviews of "Baroque Concerto" for Tuba and Piano

Sorry, there's no reviews of this score yet. Please .
In order to submit this score to ScoreExchange.com Warren Wernick has declared that they own the copyright to this work in its entirety or that they have been granted permission from the copyright holder to use their work. If you believe that this score should be not available here because it infringes your or someone elses copyright, please report this score using the copyright abuse form.