Concerto for English Horn and Band

By: Peter Felice
For: Orchestra + solo English Horn
This music is in your basket
View basket
Loading... 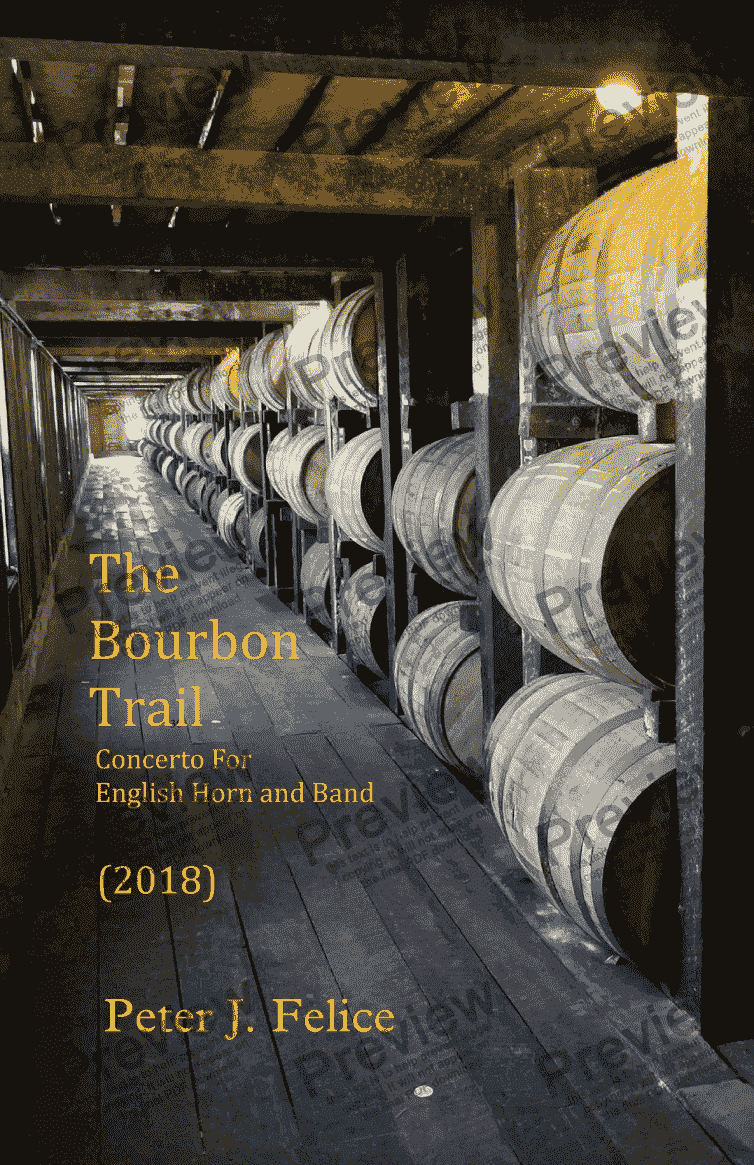 Concerto for English Horn and Band

Composer
Peter Felice
Year of composition
2018
Publisher
peterjfelice.net
Difficulty
Moderate (Grades 4-6)
Duration
15 minutes
Genre
Modern classical music
License details
For anything not permitted by the above licence then you should contact the publisher first to obtain permission.

In 2018, I went on my own personal bourbon tour throughout parts of central and western Kentucky.Despite the fact I live in Indiana, I pretty much grew up in Kentucky and I have wanted to write a Kentucky-inspired piece for a long time. With Autumn Grasty, the soloist who commissioned this piece, and Phil Thomas, the director of the band who premiered it, both being fans of Kentucky Bourbon, I jumped at the opportunity to explore a piece that focuses on the historical significance of the bourbon industry in the bluegrass state. Thus, the title The Bourbon Trail was born.

The first movement, Frontier, was inspired by Bulleit Bourbon. This movement represents the explorer. The Bourbon enthusiast who puts his time and energy in discovering new bourbon recipes and ways to get them out to the public. The Bulleit brand has been around for a long long time and dates back to an old legend in which the original creator of the brand traveled to New Orleans to sell his Bourbon but mysteriously disappeared on the way. This should explain the brief dixieland section towards the end of the movement that concludes very abruptly.

The second movement, Passion, was inspired by Four Roses out of Lawrenceburg, Ky. The most interesting thing about this Bourbon is probably the name, or more importantly how the name came about. In the late 1800's, during his travels Bourbon Connoisseur Paul Jones, Jr. met a southern belle who he fell in love with. Although at times they were far apart, he never stopped loving her to the point where he sent her a telegram asking for her hand in marriage. Her reply was that if she was seen wearing roses at an upcoming gala they were both to attend, then her answer would be yes. So weeks later the gala came, Jones shows up to see his future bride wearing a corsage with four beautiful roses on it. Often times people who speak of Paul Jones Jr say that he puts as much passion in his bourbon as he did in his marriage.

The third and final movement of the concerto, Heritage, is the least programmatic of the three. Aside from the fact the lightheartedness of this piece was inspired by an outgoing, and comical tour guide that taught me quite a bit of Bourbon history while visiting the Bourbon Heritage Center in Bardstown, Ky, this movement was more of a tribute to our talented soloist and the time her and her husband spent with the US Air Force. The inclusion of the US Air Force Theme, Off We Go, was originally going to be merely a reference but when I had discovered the concert would be on veterans day I thought this would be the perfect opportunity to go all out with the tune many people in the audience will recognize.

Reviews of The Bourbon Trail