By: Peter Felice
For: Solo instrument (Flute)
This music is in your basket
View basket
Loading... 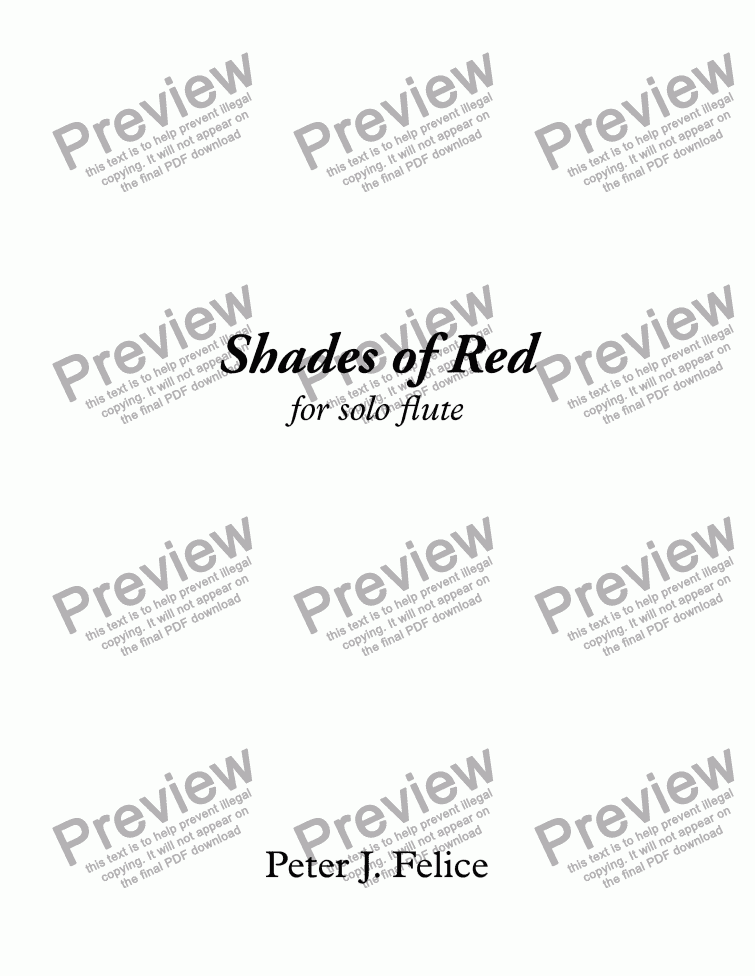 Composer
Peter Felice
Year of composition
2015
Publisher
peterjfelice.net
Difficulty
Difficult (Grades 7+)
Duration
1111 minutes
Genre
Modern classical music
License details
For anything not permitted by the above licence then you should contact the publisher first to obtain permission.

The idea for ‘Shades of Red’ was devised during a meeting with a friend in which I would give him verbal images for him to draw with music from his flute. When I gave him ‘the color red’ as one of the examples, he played some somewhat aggressive improve motifs. While has playing, I thought of what the color red signified in our world. Red is often thought of as a very vibrant color, and in psychology it has a pretty intense nature. It can signify love and passion while at the same time influence anger and war. So I thought to myself, what if there was a way I could express the different shades of the color red into their own individual characteristics. Much like a family in which the children maintain some connecting trends from their parents, yet they tend to be different from each other in character. While each shade contains hints of the original color of red, they can evoke very different emotions and my goal was to bring out these emotions, or personalities, through music. These are the characteristics that I was able to draw from five selected shades:

Auburn – Auburn is the closest thing to a mixed personality. Consumed in a bit of an identity crisis, Auburn will stay close to its relatives at one moment and then drift far from them in the next. Auburn is not direct, rather it moves in a sloppy, irregular fashion which makes it unpredictable and fragile. Auburn maintains its place in the family by always keeping things interesting.

Rust – Rust is the oddball of the bunch. The black sheep. The one who makes a career out of being different. Rust is often thought of as a patiently destructive individual, slowly consuming at the surface, yet Rust is protective of its weaker friends, strengthening the outer layers of their souls.

Scarlet – Scarlet is the definition of agitation. Scarlet is sharp. Scarlet moves very sporadically from one place to the next, rarely sitting still even for a second. Maintaining the attention span of a goldfish, having a conversation with Scarlet is difficult, yet exciting because of the numerous frontiers that can be explored in such a short span of time.

Maroon – Maroon moves about in a sluggish, cautious manner. Anxiety swarms maroon as it crawls about shyly, keeping close attention to its surroundings. Despite Maroon’s dark and solemn demeanor, it is one of the more desired characters because of its rich and mysterious appearance.

Fuchsia – Fuchsia is not shy about standing out. An egocentric at heart, Fuchsia will dazzle those whom it feels most important to connect with. Fuchsia does not have time to wait for the less enthusiastic, but its vibrant emotions and active personality help bring smiles to the depressed.

Reviews of Shades of Red

Sorry, there's no reviews of this score yet. Please .
In order to submit this score to ScoreExchange.com Peter Felice has declared that they own the copyright to this work in its entirety or that they have been granted permission from the copyright holder to use their work. If you believe that this score should be not available here because it infringes your or someone elses copyright, please report this score using the copyright abuse form.