By: Rossini
For: Quartet of Trombones
This music is in your basket
View basket
Loading... 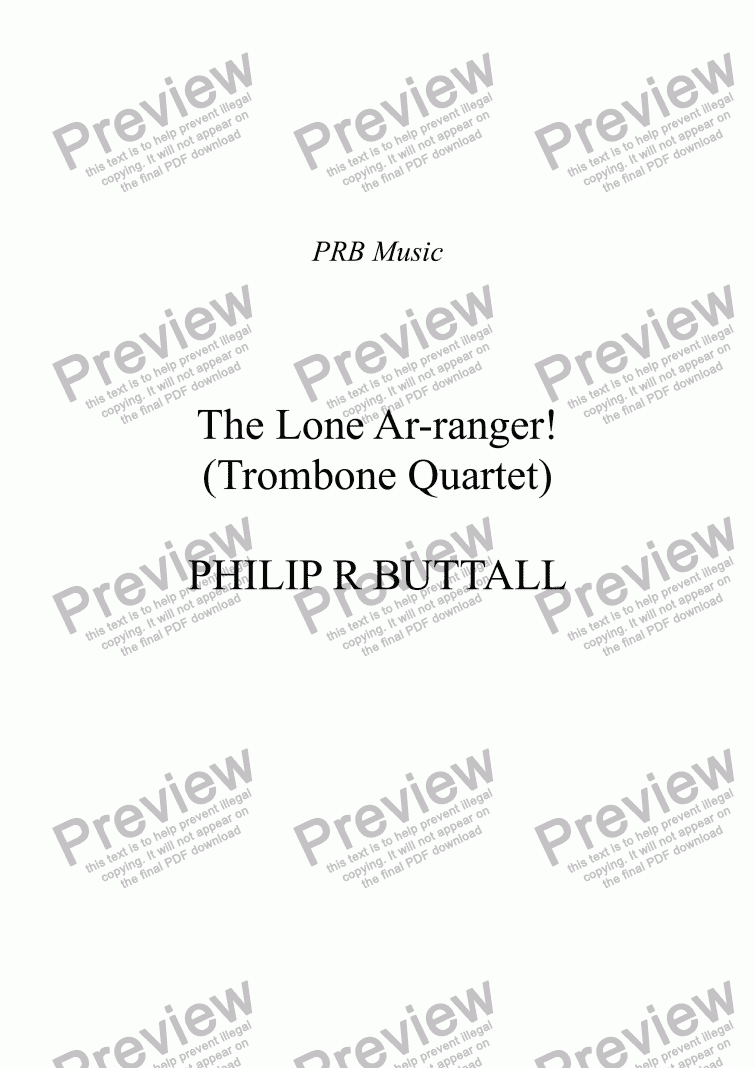 By: Rossini
For: Quartet of Trombones

Composer
Rossini
Year of composition
2006
Arranger
Philip R Buttall
Publisher
PRB Music
Difficulty
Difficult (Grades 7+)
Duration
3 minutes
Genre
Classical music
License details
For anything not permitted by the above licence then you should contact the publisher first to obtain permission.

From time to time I have been asked whether there is an arrangement of The Lone Ar-ranger! available for various small ensembles. Most recently I have made ones for Recorders, Clarinets, and Bassoons.
A short while ago, Anthony Vaughan, from Oldham, Greater Manchester, asked me whether I had considered one for trombone quartet, as Anthony studies trombone, and is a member of an up-and-coming quartet himself. This posed certain problems which, say, an arrangement for bassoons didn’t, even though their ranges aren’t dissimilar. Anthony reminded me that, despite being a slide instrument, trombones are still very agile, though fast running-passages are better suited to the higher register. The present arrangement was made with Anthony’s invaluable assistance and suggestions, who kindly advised me along the way as to what would work, and what wouldn’t. With excellent playback via Garritan Personal Orchestra, it’s all to easy to think that whatever you write must be playable, just because GPO can play it!
Here is some information on Anthony, and his quartet, Thunderbones.Anthony Vaughan (bottom of picture) is 20 years old and plays Tenor and Alto Trombone (and if asked will play Euphonium, Tenor Horn, Tuba - basically, if it’s brass, he will have a go!)

He started playing the Trombone at Primary School with Gerard Booth, but now studies with Jonathan Leedale and has never looked back.
Although Anthony is known to dabble in other Brass instruments from time to time, he always returns to the trombone because "nothing is as good!" He also plays bass guitar and likes to try his hand at composing and arranging from time to time.
Anthony currently studies HND music at the University Centre Oldham on Trombone and Bass Guitar. Anthony currently leads a hectic life, juggling music, studies, practice and leisure all at once, and attends the Oldham Music Centre three nights a week, playing (and singing) in various ensembles and groups. The attached MP3 file is again courtesy of GPO Sibelius Edition, but hopefully Thunderbones will get round to making their own recording, in the not-too-distant future!

Since uploading this version for trombone quartet, I have been asked to supply parts for all trombones in the treble clef, to accommodate those Brass Band aficionados out there! I have since had a request to substitute two french horns for trombones 1 & 2 respectively, and which seems to work equally well. All these extra parts are now available, along with the originals.

[I have also been asked to produce a version for two euphoniums and two tubas, but this will appear as a separate arrangement.]
I have just been made aware, by fellow SibeliusMusic composer, Stuart Blake, of Malvern, for whom I made some treble clef tranpositions, that, for all its sophistication, Sibelius apparently wasn’t too effective in re-positioning the expression marks, triplet signs, hairpins etc when transfering from one clef to the other. Stuart has kindly cleaned up the treble clef parts for me, and I shall be asking Daniel Spreadsbury at Sibelius why this is? If I’ve been doing something wrong, then I’ll flag it up back here! Anyway, a big thank you to Stuart!
Following a number of requests worldwide, I have now uploaded a special non-playing score, which lists, and identifies all the tune fragments used in The Lone Ar-ranger!
Click here for further information.