Sign in / Register
HomeInstrumentationsSolo instrumentUnder the Double Eagle for Piano

Under the Double Eagle for Piano 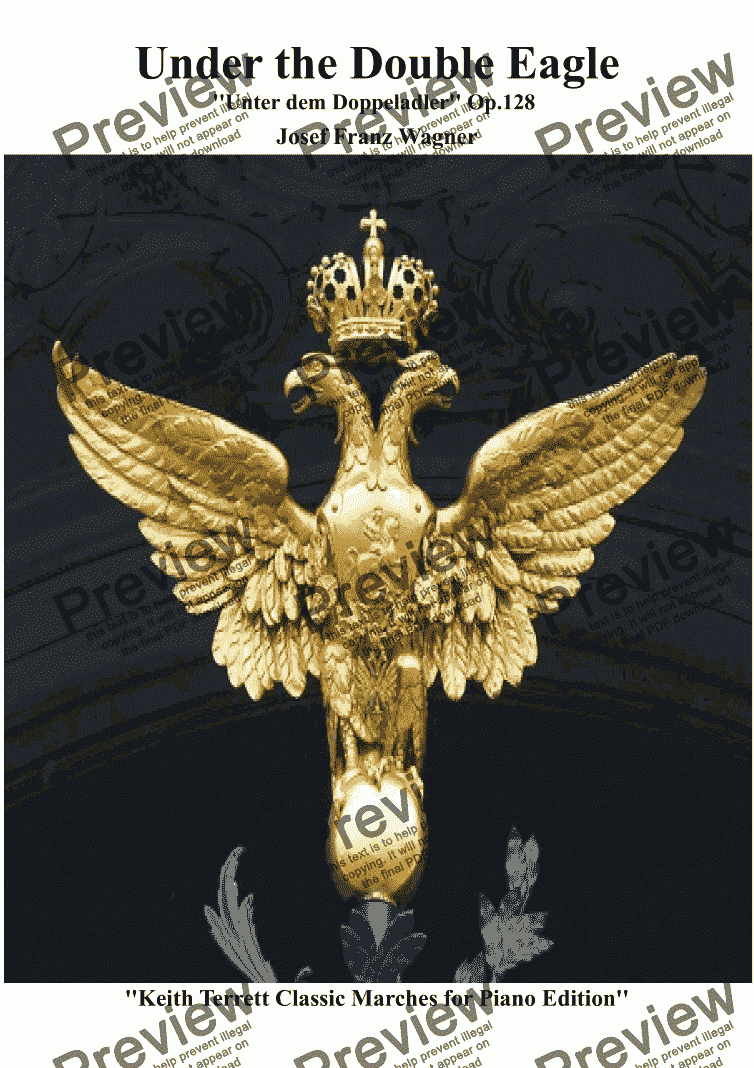 Under the Double Eagle for Piano

Composer
Josef Franz Wagner (20 March 1856 – 5 June 1908)
Year of composition
1893
Arranger
Keith Terrett
Year of arrangement
2020
Publisher
Music for all Occasions
Difficulty
Moderate (Grades 4-6)
Duration
2 minutes
Genre
Classical music
License details
For anything not permitted by the above licence then you should contact the publisher first to obtain permission.

"Under the Double Eagle" (German: Unter dem Doppeladler), Op. 159, is an 1893 march composed by J.F. Wagner, an Austrian military music composer. The title is a reference to the double eagle in the coat of arms of Austria-Hungary.

It was published in the United States in 1902 by Eclipse Publishing Co., a branch of Joseph Morris Music in Philadelphia, Pennsylvania.

This piece is in E-flat major, though the Trio is in A-flat major. It is written in ternary form. "Under the Double Eagle" has been recorded by country music guitar and banjo players, several identified with the bluegrass style.

Josef Franz Wagner (20 March 1856 – 5 June 1908) was an Austrian military bandmaster and composer. He is sometimes referred to as "The Austrian March King".

He is best known for his 1893 march "Unter dem Doppeladler" (Op. 159) or "Under the Double Eagle", referring to the double eagle in the coat of arms of Austria-Hungary. The march became a favourite part of the repertoire of American composer and bandleader John Philip Sousa, whose band recorded it three times. The piece was the official regimental march of Austrian Artillery Regiment Number 2 until its dissolution in 2007.

The tune was parodied in the Benny Goodman recording "Benjie's Bubble" and was also used for the well-known Monty Python's Flying Circus animation segment "Conrad Poohs And His Dancing Teeth".

"Under the Double Eagle" is well known in country music, having been recorded by a number of guitar and banjo players, several of them identified with the bluegrass style.

Wagner is also known for the march "Tiroler Holzhackerbuab'n" (Op. 356), or "Tyrolean Lumberjacks".[6] In 1895, his only opera, Der Herzbub, premiered in Vienna.

UNDER THE DOUBLE EAGLE. AKA – “Double Eagle March," "Unter dem Doppeladler.” Old Time, March. C Major (modulates to ‘F’ in the second part). A multi-part march that found its way into the old time repertoire, where it has usually been known as a guitar piece. The melody was originally composed in 1893 by Franz Joseph Wagner {1856-1908} (as “Unter dem Doppeladler, Op. 159”) while he was bandmaster of the 47th Austrian Regiment. It was said to be, for a time, the national anthem of Germany {?}. It was a popular brass band piece in Europe, where the double eagle of the Habsburgs was featured on the Austro-Hungarian flag. “Under the Double Eagle” was particularly popular in Texas in the 1930’s and 1940’s, where it was perhaps introduced by German or Austrian immigrants. Bill Boyd’s Cowboy Ramblers’ 1935 version of the tune became the fourth best-selling country music record for that year, and the tune was often heard played by Allied bands in World War II. Later, a popular version was recorded by guitarist Doc Watson in the 1960’s. Several old-time versions do not change key in the second part. Taylor Kimble (Va.), for example, played the tune in D Major throughout. African-American fiddler Cuje Bertram (Ky.) played a march similar to “Double Eagle” on a home tape in 1970, made for his family.

West Virginia musicians knew “Under the Double Eagle”: the tune was recorded by Kanawha County fiddler Clark Kessinger, who recorded several marches as well as breakdown pieces. It was learned by itinerant West Virginia fiddler John Johnson (1916-1996), originally from Clay County, from fiddler Dorvel Hill who lived in a coal-mining town called Pigtown, not far from Clay, W.Va. Anecdotally, it was popular with Minnesota fiddlers in the early 20th century. North Carolina musicians The Red Fox Chasers recorded the tune in Richmond, Indiana, in April, 1928, as did North Carolina banjo player Charlie Poole a year later. Southern Indiana fiddler Lotus Dickey played a version in four parts (most rural versions are in two parts, according to Paul Tyler).

I was bashful back then and wouldn’t go in anybody’s house hardly. I’d sit on the railroad and listen to Dorvel play the fiddle at night. And I learned most all of Dorvel’s tunes. I just set down there and listened to all his tunes and then go home and play them. … (Michael Kline, Mountains of Music, John Lilly ed. 1999).

Reviews of Under the Double Eagle for Piano