The Vicar of Bray

By: anon.
For: Solo Solo Violin + piano
This music is in your basket
View basket
Loading... 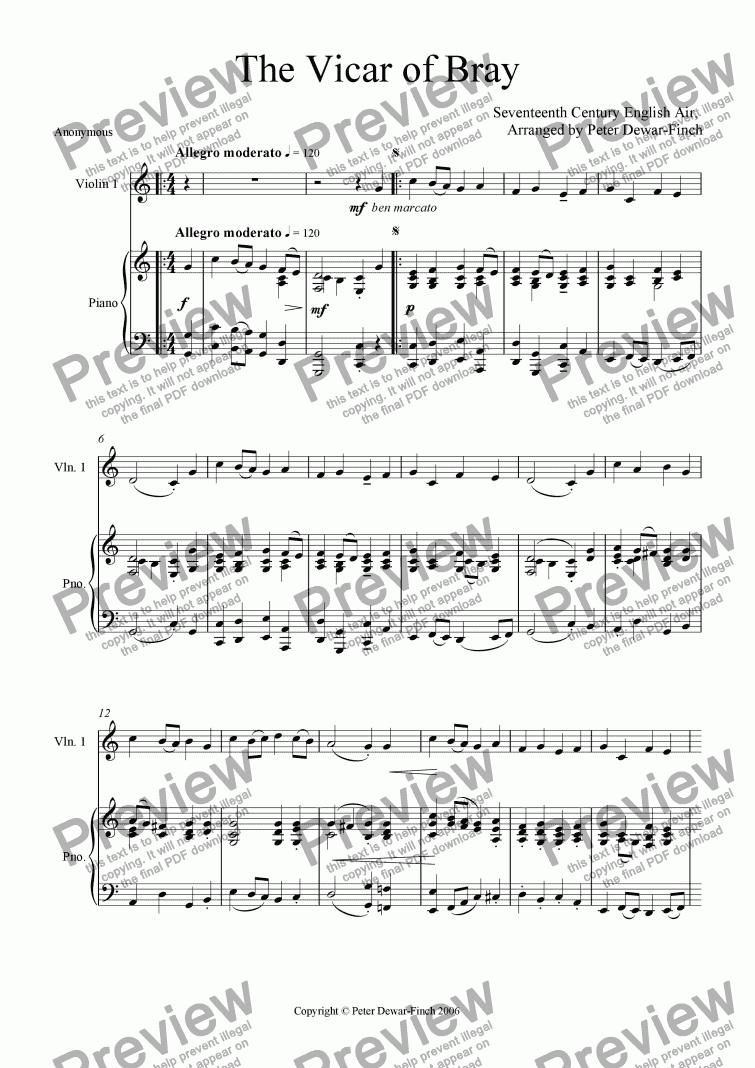 The Vicar of Bray

Composer
anon.
Arranger
Peter Dewar-Finch
Lyricist
anon.
Difficulty
Moderate (Grades 4-6)
Duration
2 minutes
Genre
World music
License details
For anything not permitted by the above licence then you should contact the publisher first to obtain permission.

TUNE: This is indeed a very old good English tune which, even at this early stage in history, has the unmistakable �English� lilt, much beloved of Morris dancers and folk singers alike.

The ballad indicates that the Vicar of Bray referred to was Francis Carswell (Vicar 1650-1709), but the story was recorded of the rector through the turbulent Tudor years as early as 1662. This, much more likely candidate, was named Simon Alleyn (Vicar 1523-65) and his memorial slab lies in the middle of the nave.

Simon Aleyn maintained his position through many political and religious changes from 1640 to 1688: this circumstance giving rise to a proverbial saying, that 'the Vicar of Bray will be Vicar of Bray still', though of course there is no absolute proof that Aleyn was the famous original.

The song, commencing ' In good King Charles's golden days,' is ascribed in Nichol's Select Poems to a soldier in colonel Fuller's troop of dragoons, in the reign of George I. However this may be, the present writer has discovered an early version of the song printed in the reign of Queen Anne. It is in vol. iii. of Miscellaneous Writings in Prose and Verse (2nd edition, 1712), by Edward Ward, the well-known satirical writer. The song or poem is there entitled The Religious Turncoat, or The Trimming Parson,

The tune now united to The Vicar of Bray, though an old one, is not the original, and in fact the union of the two is comparatively recent.

On early sheet music The Vicar of Bray is set to a variant of the old Scottish melody Bessy Bell and Mary Gray, and it so appears in Walsh's British Musical Miscellany, vol. i.[1734].

This quite unvocal and inappropriate tune was associated with the words until about 1770 or 1780, when a new lease of popularity was, given to the song by the old tune The Country Garden being fitted to it. This tune is the one now always sung to the words.

The Country Garden was a vocal melody used as a country dance air, and under the title �The Country Garden, the new way,� is included in Daniel Wright's Compleat Tutor for Ye Flute, c. 1735.

There is nothing, apparently, to show what the 'old way' of the tune was, for Wright's melody is found exactly in several books of Country Dances of the period, and is also the same as the tune The Country Garden printed as the air for a song in the Quaker's Opera, 1728. This is also used in other ballad operas. The Country Garden tune and the words of The Vicar of Bray are found united in the Convivial Songster, 1782, in Ritson's English Songs, 1783, in Calliope, or the Vocal Enchantress, 1788, and elsewhere.

Reviews of The Vicar of Bray