By: trad.
For: Large mixed ensemble
This music is in your basket
View basket
Loading... 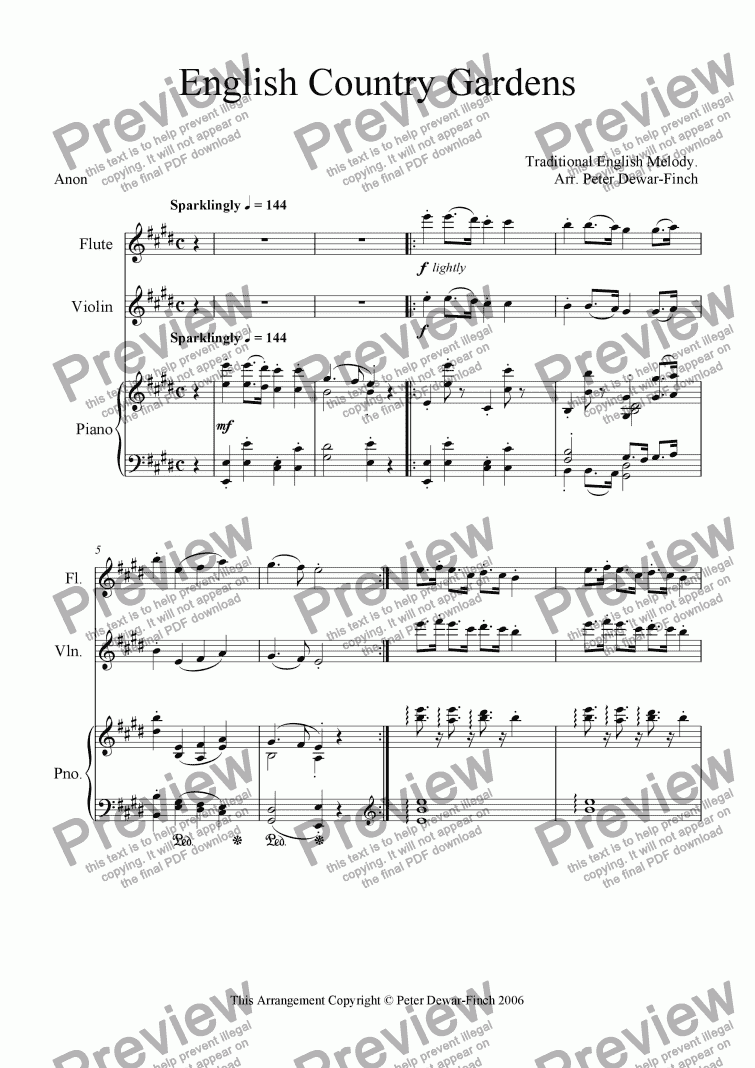 By: trad.
For: Large mixed ensemble

Composer
trad.
Year of composition
1907
Arranger
Peter Dewar-Finch
Difficulty
Moderate (Grades 4-6)
Duration
2 minutes
Genre
World music
License details
For anything not permitted by the above licence then you should contact the publisher first to obtain permission.

COUNTRY GARDENS: The original composer of the melody is not known, but it is believed to be derived from a medieval source, originally, called the Handkerchief Dance, being a traditional English Morris dance, and collected by Musicologist and friend of Ralf Vaughan Williams Cecil J Sharp and published in "Morris Dance Tunes" by Sharp and Herbert C. Macilwaine (Novello & Co., Ltd., London) in 1907 - 1924.

Percy Grainger took an interest in the folk music of England while he was living there in the early 1900�s and quickly developed a deep interest in gathering and preserving its traditional folk music. Percy Grainger wrote his version of Country Gardens in the early 20th Century as a result of the work he performed by collecting folk music throughout the United Kingdom. It was originally set as a piano piece as a birthday present for his mother on July 8, 1918, and dedicated to the memory of his friend Edvard Grieg.

In September 1914 Percy and his mother moved to America just a month after the outbreak of the First World War. Much of the essence of Grainger�s achievement can be traced to these Edwardian years, during which time he collected over 500 examples to form the basis of his British Folk Music Settings including Country Gardens, Molly on the Shore and Shepherd�s Hey!

The writer of original words of the poem set to Country Gardens is unknown and anonymous, but the poem was most likely written to accompany Grainger�s very popular arrangements of this piece. I postulate that the author was probably his wife, the Swedish artist and poet Ella Viola Strom who he married at the Hollywood Bowl in 1928, or his great friend, British monk, Dom Anselm Hughes, then a leading specialist in medieval music. Together they arranged and published nearly a dozen pieces for chorus, band, and chamber orchestra, based on medieval plainsong. However, extensive research has revealed nothing, the origin of the poem remains a mystery to me. But one telling detail is that all the birds mentioned are North American species.

An exhaustive list of Grainger�s work is to be found here: www.bardic-music.com/pgcat.htm