Air on the G string 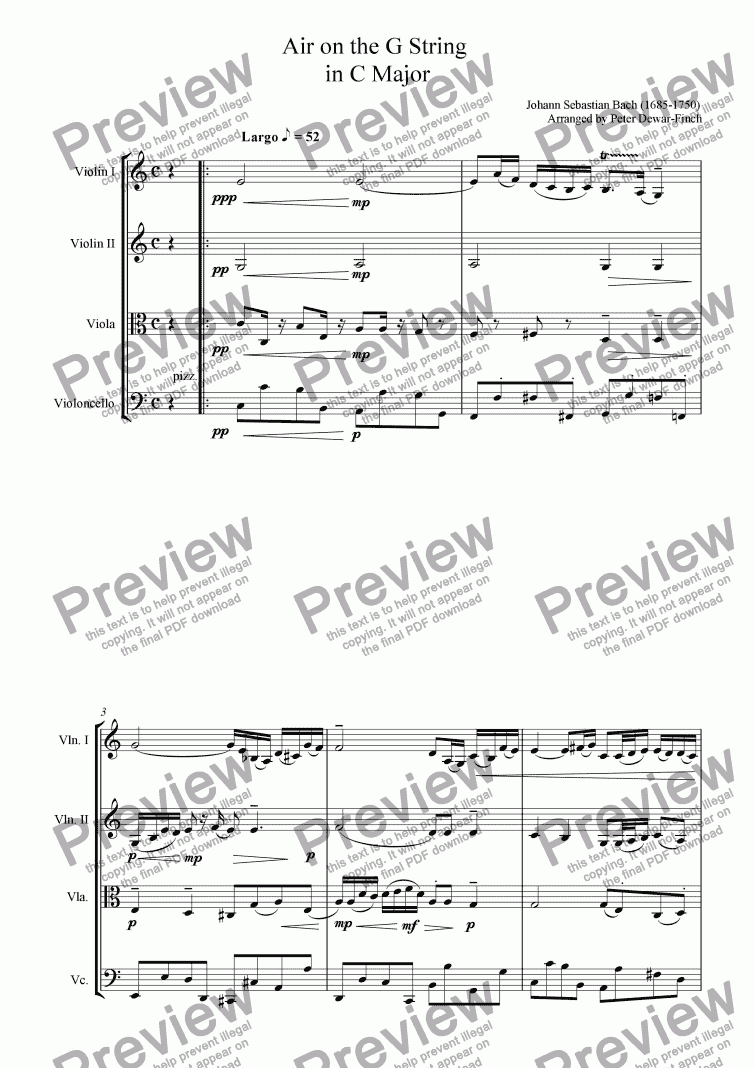 This popular piece by JS Bach, though made famous through its use in Hamlet cigar adverts, is originally part of the Orchestral Suite No 3 in D Major and written for Bach's employer Prince Leopold, in the little principality of Anhalt-C�then between 1717 and 1723, the 'Air on the G string' arrived in its current popular form over 100 years later, when German violinist August Wilhelmj (1845-1908) arranged the piece for violin and piano to be played on the evocative G-string of the violin.

My arrangement celebrates the confluence of those two events. Having never heard August Wilhelmj�s arrangement I�ve approached my task purely from my own study and observation, writing down �by ear� only what I can hear, extrapolated from other arrangements and working out my own from a creative standpoint.

August Wilhelm�s arrangement may well have been purely for violin and piano, but I too am intrigued by the notion of playing this air on the G string of the violin.

I have never been able to find a useful arrangement purely for a string quartet in which the violin is primarily played on the G string, probably because the piece was originally Scored for first and second violins, viola, and continuo. And now that I want some challenges for my new youthful violin I decided to create my own arrangement, again by ear and instinct, and allowing a pizzicato cello to take the continuo part. Having tried to play part of the piece on the G string of the violin, I can attest to the difficulty involved, especially when one�s hands are small, like mine and somewhat careless due to M.S.

The thing which caught my attention whilst studying Bach�s Orchestral Suite No 3 in D Major is the means, syntax, musical grammar and structure of the piece. It�s orchestration and progression are highly reminiscent of the late 19th century Romantic movement and, I believe, owes more to the reinterpretation by the German violinist August Wilhelmj who arranged it initially for violin and piano, than to Bach himself. www.harmony.org.uk/book/syntax_music.htm .

The Romantic music era was the predominant music era of the 19th century. It directly followed and grew out of the classical music era. Romantic composers expanded on the forms and structures established in the previous era, experimenting with tonality, including increased use of chromaticism and dissonance. Music became longer, resulting in new innovations in form such as cyclic form and program music

The musical language and form is so like that of Remo Giazotto who �reconstructed� Albinoni�s Adagio for organ and strings from a fragment, that it is clearly of contiguous eras.

I speak with some experience of having arranged some Bach organ pieces for strings.

A major significance for this sudden explosion of newly rediscovered Baroque and Classical music was the advent of recorded sound. Musicians wanted to utilise the new technology of first the wax cylinder, then the shellac disk. With the technology established by the middle of the 20th century, global music culture blossomed to heights never before experienced, leaving the rich legacy we have inherited.

Today, of course, music is both inspired by and driven by the technology for reproducing it, in addition to traditional methods. However, if anything, our age is more honest than that of our forbears as we strive to reveal the origin of each piece and faithfully reproduce it. Having said that, there is still room for being inspired by �the classics� and for reinterpreting them for our own purposes.

Hence, I feel justification in reinterpreting Bach�s Air from his Suite number 3 in D major. In truth, Bach never wrote a piece called �Air on the G String�, - German violinist August Wilhelmj, did. He wanted to explore the challenge of playing an air entirely of the G string. Just as Albinoni never wrote an Adagio for organ and strings, - Milanese musicologist, Remo Giazotto did in 1945, using a small fragment of a Trio Sonata which consisted of the bass line and six bars of melody, which he discovered in Dresden State Library. It is ironic that Albinoni's rediscovery by the wider public in our own times was largely based on this ever-popular piece which Albinoni would only barely recognize.

Naturally, my reinterpretation of the Air on the G String, is of my own era, and will always sound like it. But, nonetheless, I hope it is easily playable by strings enthusiasts and interesting to play.

Reviews of Air on the G string