By: Georges Bizet
For: String quartet
This music is in your basket
View basket
Loading... 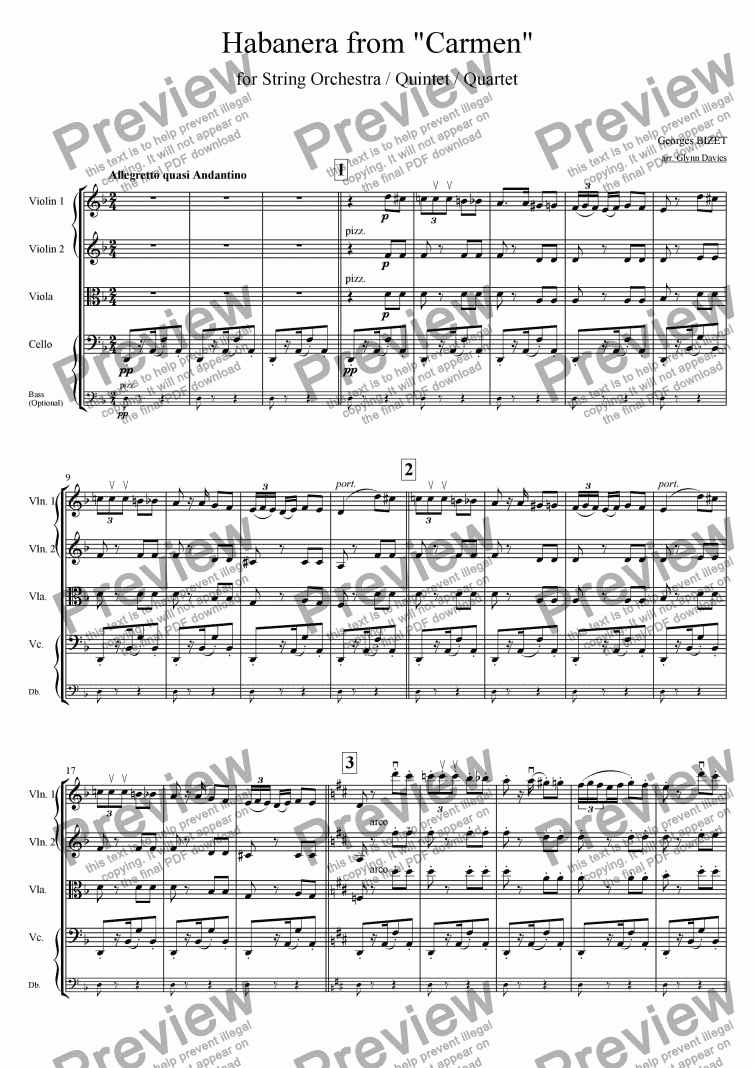 By: Georges Bizet
For: String quartet

Composer
Georges Bizet
Year of composition
1873
Arranger
Glynn Davies
Difficulty
Moderate (Grades 4-6)
Duration
3 minutes
Genre
Classical music
License details
For anything not permitted by the above licence then you should contact the publisher first to obtain permission.

The reception history of Georges Bizet’s final dramatic work, Carmen, is rife with ironies. Although almost unanimously condemned by Parisian critics after its first performances in 1875 for its overt sexuality and graphic final scene, Carmen intrigued a number of sophisticated minds and ultimately reached the public in a way that perhaps no other opera has. Bizet’s aim in composing Carmen had been to transform the flaccid, moralistic bourgeois genre of opera comique into a more sophisticated type of staged work. With a libretto by Ludovic Halevy and Henri Meilhac, Carmen survives in no single authoritative version despite its enormous popularity and influence. Guiraud converted the original sections of spoken dialogue into recitative for the 1875 Vienna performances. In recent years the original version has made a striking comeback, and one can argue that it is far more telling dramatically than the traditional version with the recitatives. There is also a popular orchestral suite drawn from the opera, and several violin and piano fantasies on its themes also exist. Carmen is cornerstone item in any opera collection. It is ironic that Bizet composed one of music’s most evocative landscapes of Spain without ever having been there.

Bizet based his opera comique on Prosper Merimee’s story, Carmen, which had appeared in October 1845. Librettists Halevy and Meilhac emphasized the exotic characters of Merimee’s story and retained the themes of social class distinctions, overt sexuality, and misogyny that emerge so forcefully in Merimee’s model. Bizet gave musical expression to the libretto using recurring motives, a distinctive melodic style, and manipulations of genre conventions to give each character a musical significance and a unique expressive idiom. The opera’s prelude introduces some of the most important themes, including Escamillo’s toreador music and an exotic and sinewy chromatic motive that permeates the opera as a musical symbol for both Carmen’s character and the insurmountable power of fate. The gypsy fortune-teller Carmen sings in dance numbers, such as the habanera ("L’amour est un oiseau rebelle") and the seguidilla ("Pres des ramparts de Seville") of Act One, and the Gypsy song ("Les tringles des sisters tintaient") of Act Two. Traversing boundaries of diatonic harmony, the sultry chromaticism of Carmen’s habanera theme underscores her status as both ethnic outsider and sexually adventuresome female. In this she stands in sharp contrast to Micaela, whose Act Three aria ("Je sais que rien ne m’epouvante") is set in the ternary form of the elevated bel canto French grand opera aria. The bullfighter Escamillo announces his trade and masculine prowess in the rollicking Act Two toreador song ("Toreador, en garde!"), which carries the musical suggestion of battle in its fanfare opening and insistent march rhythm. Don Jose’s musical styles reflect different levels in his descent from dutiful soldier to the underworld of obsession. In Act One, Don Jose sings in a duet with Micaela ("Ma mere, je la vois"), adopting her elevated lyrical vocal style. In Act Two, after his imprisonment, Don Jose sings a more popular march-like tune ("Halte-la! Qui va le? Dragon d’Alcala"), reflecting his lower social status. His angst-ridden wailings in the opera’s final scene defy clear formal arrangement and convey the psychological turmoil of an obsessed and defeated individual. Thus did Bizet forge a work that both summed up the musical resources available to him and had enough color and sheer melodic attractiveness to insinuate itself permanently into the public mind. Carmen, indeed, has been the subject of several popular-music adaptations over the years.

This arrangement is for standard string quartet, with optional Double Bass for use with string orchestra.

Reviews of Habanera from "Carmen"