Sign in / Register
HomeInstrumentationsString quartetWater Music Suite No.2 in D

Water Music Suite No.2 in D 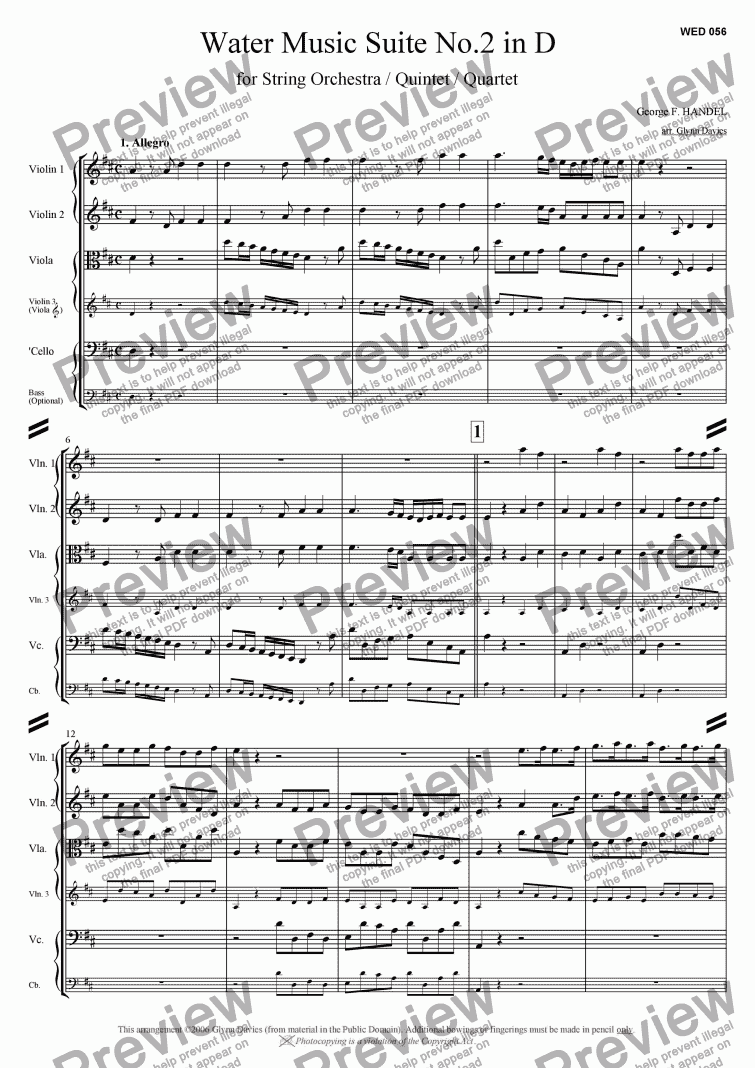 Water Music Suite No.2 in D

Composer
George F. Handel
Year of composition
1717
Arranger
Glynn Davies
Difficulty
Moderate (Grades 4-6)
Duration
10 minutes
Genre
Classical music
License details
For anything not permitted by the above licence then you should contact the publisher first to obtain permission.

There is a story that George Frideric Handel's magnificent Water Music was originally intended as a peace offering to King George I, for duties to the former Elector of Hanover left unfulfilled by Handel. As the story goes, Handel seized the opportunity in 1717 to provide some musical entertainment for the King's now-famous barge party on the River Thames, and was restored in the royal eye. George I was completely enamored with the Water Music (asking for the hour-long work to be repeated three times and not returning to the palace until the wee hours) and all past transgressions were immediately forgotten. There was indeed a grand party on the Thames on July 17, 1717, during which some of Handel's music (possibly but not definitely the Water Music) was played, but the rest of the story is likely highly fictionalized.

The first of the Suite's five pieces is the only substantial through-composed movement to be found in it (the rest are all dances of one kind or another). Although given no heading by Handel, this fast-tempo movement is composed in very normal Baroque overture style, starting off with an accompanied trumpet fanfare and soon moving on to ponder a regal dotted-note motive that brings the French Overture to mind. The crystalline brilliance of Handel's scoring is plain from the start: witness the fiery descending string scales that support the opening trumpet blast and, a while later, the virtuoso sixteenth notes of the trumpets themselves.

After this overture movement comes a little musicological trouble, as the hornpipe dance included in some printed editions is very often replaced in performance and print by an entirely different dance (also a hornpipe). The more commonly-played of the two hornpipes is certainly one of Handel's most famous instrumental compositions, filled with wonderful syncopations and, during the middle of the first of the dance's two (quite lengthy) halves, some charming interplay between the trumpets, horns and strings.

Although most often called a minuet on account of its triple meter, the stately, binary-form piece that comes third in the D major Suite in fact carries the heading "Coro," or Chorus.

The Lentement that follows (the indication is Handel's own), is a delicate thing, rolling gently along on dotted quarter-eighth-quarter rhythms and providing just enough minor mode contrast in its second section to make the da capo reprise of the opening taste all the sweeter.

Handel marks the following Air (really in the rapid style of the bourree) to be played three times all told, leaving it up to the musicians to decide what, if any, textural contrasts might be nice each time around.

This arrangement is for standard sting quartet, with an optional bass part for use with string orchestra.

Reviews of Water Music Suite No.2 in D