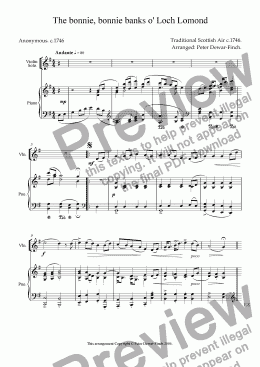 Composer
trad.
Arranger
Peter Dewar-Finch
Lyricist
anon.
Difficulty
Moderate (Grades 4-6)
Duration
5 minutes
Genre
World music
License details
For anything not permitted by the above licence then you should contact the publisher first to obtain permission.

This has been arranged for violin and piano, but a vocal part can easily be substituted for the violin part. I have provided the full lyrics at the end of the score for anyone who wants to do that.

The song was thought to have been written around the time of the Scottish Rebellion of 1745, the Jacobite Rising at Glenfinnan and ending in the battle of Culloden on 16 April 1746 when some supporters of Bonnie Prince Charlie, retreating from the invasion of England, were captured by the English.

The words of the song are the words of one soldier who faces execution to another who is to be freed. The soldier who is about to die tells his friend that he will take the Low Road back to Scotland. The Low Road was the name of the spiritual path that was believed to exist along with the spirits of those who died far from home could return to the place of their birth. The Low Road would speed the executed soldier to Scotland faster than his compatriot who faced many miles of hard marching, but although he might return to his homeland swiftly enough after death, he would never meet with his sweetheart again. King George IIs forces won the war against the Jacobite rebels, and the clans were decimated. During the purges of the highlands, thousands were lost, families and clans were destroyed, lands were seized and the people plunged into poverty, and the Scots were stripped of their tartans, music and weapons. Clans from the Loch Lomond area had followed Bonnie Prince Charlie in the rebellion. This folk song reflects the despair of the time.