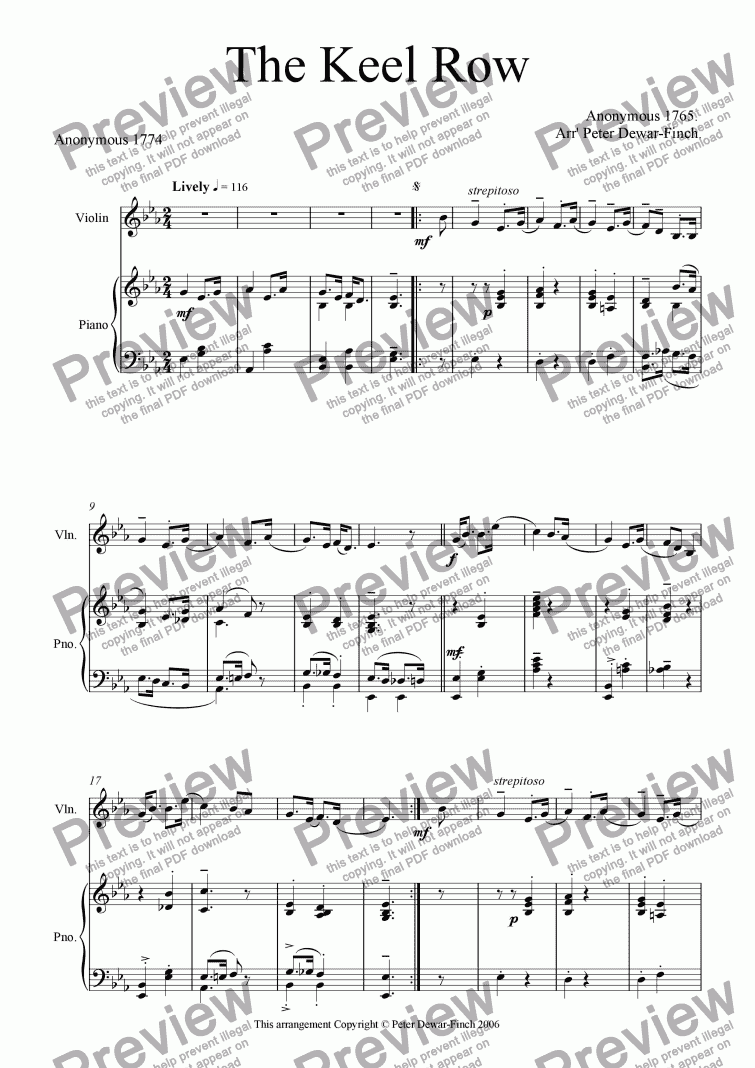 Composer
trad.
Arranger
Peter Dewar-Finch
Lyricist
anon.
Difficulty
Moderate (Grades 4-6)
Duration
3 minutes
Genre
World music
License details
For anything not permitted by the above licence then you should contact the publisher first to obtain permission.

�It�s a bit, - uum, bumpy, a bit rough!� my wife said after I�d played my arrangement of The Keel Row to her. �A bit rough?� .. �it�s meant to be! If you�d ever met the rough keelmen of Newcastle, you�d think I�d got it right!� I said. After that, I made it even more �rough and bumpy� in order to catch the character of the piece.

This particular version is written for Violin and piano as my wife, who is a keen fiddle player, requested that I arrange a version of this tune for her. This version is also eminently singable because the violin part could easily be taken by a voice. The lyrics of The Keel Row appear at the bottom of the score. The faster second part also makes an excellent dance tune and is playable on other instruments too, such as the Northumbrian Bagpipes.

The Keel Row is a Border song from Newcastle and Tyneside which was first printed in Edinburgh in 1770 in 'A Collection of Favourite Scots Tunes'.

The Keel Row is undisputedly a Tyneside song, originating in Newcastle, which most of us learned at school. But the tune does seem to have a Scottish influence or origin - perhaps a reminder of the keelmens' Border origins, but the history of that is even more difficult to trace. Many people will be familiar with the tune as the Household Cavalry March-past, or ride-past. But it seems to exist in many other parts of England and Scotland, - from Speyside to the South of England.

At the western end of the Newcastle Quayside is a street called Sandgate which once entered Newcastle by the Sand Gate of the town Wall. This street is however better famed as the one time home of that famous Newcastle community, the Keel Men, who were unique to the region. These were the highly skilled boatmen, who handled the movement of coal from the riverside to ships on the River Tyne. The keelmen took their name from their small vessels called Keels (Ceols) which could carry around 20 Tons of coal.

The earliest recorded use of Keels for transporting coal on the Tyne is in the early 1300's and it is possible that at this time the Keelmen had already established a community in the Sandgate district.

With the onset of the Industrial Revolution in the nineteenth century and the development of coal staithes as an alternative method of loading collier ships, the Keel men's trade gradually declined until it became virtually non-existent. The keel community of Sandgate, once the most populous part of Newcastle, was also sadly to die.

All that is left to remind us of this bustling Quayside community today are the unique and distinctive collection of Sandgate folk songs, the most notable being the `The Keel Row', and, like some others in this collection, has been claimed for the Scottish side of the border.

The evidence, however, in favour of its Northumbrian origin greatly outweighs any that can be produced upon the opposite side. To begin with, the keel is a vessel which is known only on the rivers Tyne and Wear. In the collection of the Society of Antiquaries of Newcastle is a Manuscript Book of Tunes, dated 1774, in which the tune appears exactly as it is now sung and played; and Joseph Ritson, the celebrated antiquary, found it so popular that he included it in his collection of old songs, The Northumberland Garland, published in 1793. These dates are anterior to the appearance of the song in any Scottish collection. Cromeck inserted it in his Remains of Nithsdale and Galloway Song, 1810; and Alan Cunningham, in his Songs of Scotland, 1825.

The earliest form in which it appeared in print is as a country-dance, entitled Smiling Polly. It appears In several of the collections of the last century, such as Thompson's 200 Country Dances, ii. 63 (1765). The words of The keel row are in Ritson's Northumberland Garland, 1793; in Bell's Rhymes of the Northern Bards, 1812; and in several later collections."

Frank Kidson (Old English Country Dances, 1890, pp 18-19) points out that The Keel Row belongs to a family of tunes with very similar parts; these include The Dumb Glutton, Cat's Got The Measles, The Devil's Fling, Jennie's Frolics, Johnny When You Die, Keel Row, The Keel Row Highland, Smiling Polly, Some Say The Devil Is Dead, Weel May The Keel Row, Well May The World Go, Yorkshire Lad, and The Yorkshire Lad, of which last there is an example in the South Riding Tunebook vol. 2.

It is also "associated in Southern England with specialised step-dances; The Monkey Hornpipe (two men face each other, hold hands, crouch and kick their legs out in Cossack fashion until the first one gives up) The Broom Dance (the dancer steps up and down and over a broom laid on the floor, he picks it up and passes it under each leg in turn as he kicks up, and eventually steps with the broom balanced on his hand and then on his chin) and The Stick Dance (the dancer steps over crossed sticks or clay pipes laid on the ground)." (Quote from Reg Hall and Mervyn Plunkett, sleevenotes, English Country Music, Topic Records 1976).

Reviews of The Keel Row