The Harp that once through Tara's Halls

By: anon.
For: Large mixed ensemble
This music is in your basket
View basket
Loading... 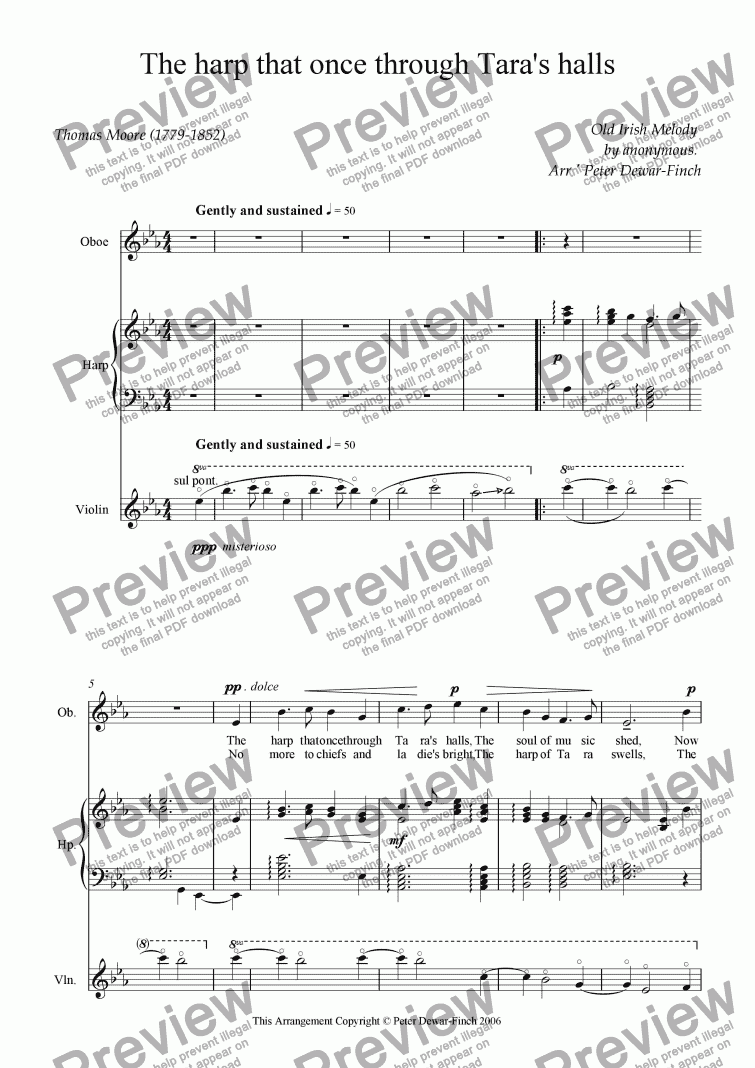 The Harp that once through Tara's Halls

By: anon.
For: Large mixed ensemble

This piece is scored for harp and oboe in place of the voice part. The original scoring is for an Irish tenor, but I have chosen an oboe in order to convey the mood I�m trying to create. The solo violin, using harmonics on or near the bridge, adds to the sound of mystery and wistfulness. Naturally, the melody may be taken by almost any instrument or voice and I have added the metered lyrics to facilitate the phrasing.

The ballad was written by the Irish barrister and poet, Thomas Moore (1779-1852). Tara is the mysterious hilltop site in Co. Meath that was once home to the Irish high kings. The piece was written while Ireland was under English rule, and Moore's Tara symbolises the seat of Irish government and the rule of Ireland. The harp, Ireland's traditional instrument, symbolises Irish culture and spirit.

The Hill of Tara, located 48 km northwest of Dublin, is one of Ireland's most important cultural icons. Dating back more than 5000 years to the neolithic age, Tara is known in both myth and history as the traditional seat of the High Kings of Ireland.

The hill of Tara is actually a low-lying ridge located half way between Navan and Dunshaughlin in Co. Meath, but it commands a stunning view of 40% of Ireland. Unfortunately, all that remains of the original site is the Dumha na nGiall (Mound of the Hostages) and a stone of destiny where druids still celebrate midsummer. But Tara has a fascinating mythical history which paints a glorious picture of its past. The following excerpt is from The Story of the Irish Race:

"The greatest structure there was the Mi-Cuarta, the great banqueting hall, which was the Ard-Righ's own dun. There was also the House of a Thousand Soldiers, the ancient poets tell us. Each of the provincial Kings had, on Tara, a house that was set aside for him when he came up to attend the great Parliament. There was a Grianan (sun-house) for the provincial queens, and their attendants. Another was the Star of the Bards–a meeting-house for the poets and the historians, the doctors and judges. This hall, the Mi-Cuarta, wherein at the great triennial Feis, all the kings, and chiefs and nobles, the Ollams or doctors, the Brehons or judges, the Files or poets, and the Seanachies or historians, were seated according to rank."

Reviews of The Harp that once through Tara's Halls