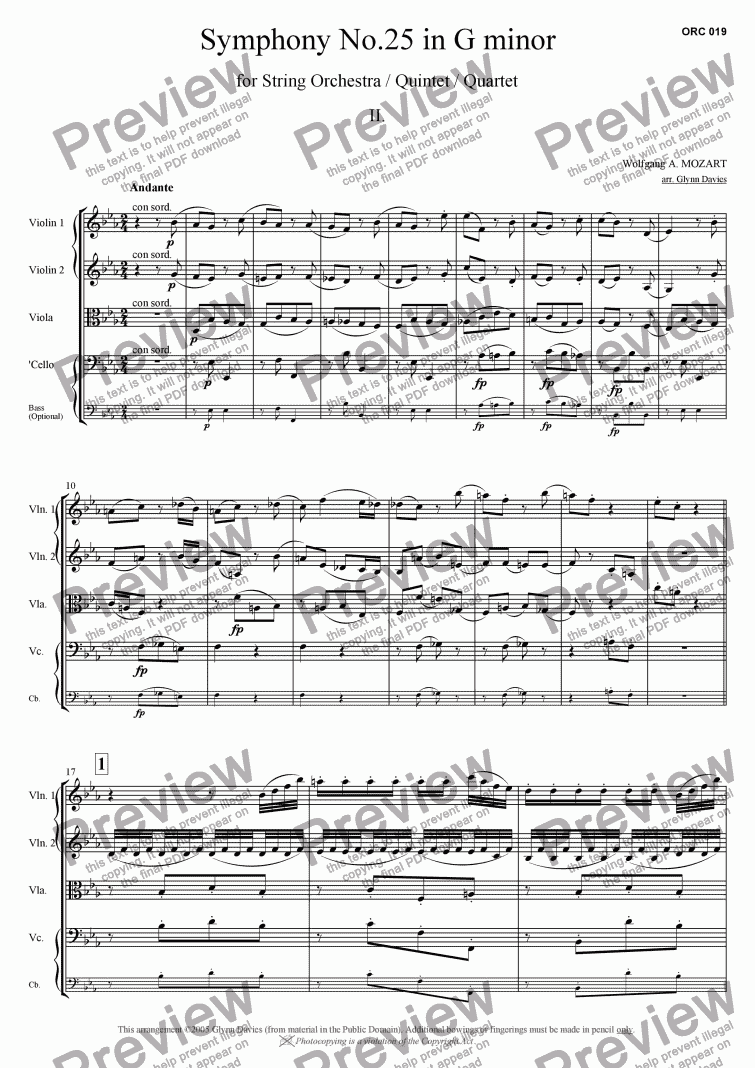 Composer
Wolfgang A. Mozart
Year of composition
1773
Arranger
Glynn Davies
Difficulty
Moderate (Grades 4-6)
Duration
7 minutes
Genre
Classical music
License details
For anything not permitted by the above licence then you should contact the publisher first to obtain permission.

Mozart and his father Leopold returned from the third of their Italian journeys in May 1773, having witnessed the success of his new opera seria Lucia Silla, K. 135 in Milan the previous December. In July, father and son once again set out for Vienna, possibly in the hopes of obtaining a post for Mozart, but although they were received by the Empress Maria Theresa on August 5, nothing is known of the details of the audience. By the end of September the Mozarts were back in Salzburg. Early the following month two new symphonies appeared, No 24 in B flat, K. 182, dated October 3, and the present work, which bears the date October 5. Both dates on the autograph manuscript were later crossed out. It seems probable that one or both symphonies were at least started in Vienna, since it is hardly likely that even Mozart would have suddenly produced two symphonies within a week of returning home.

The use of minor keys in symphonies was rare in the eighteenth century. (Mozart composed only one other, the Symphony No.40 in G minor, K. 550, and the use here of a key later identified with some of Mozart's most troubled and agitated music (the Symphony No. 40, the Piano Quartet, K. 478, and the String Quintet, K. 516) has excited much comment. In fact, rather than being viewed as a forerunner of Romanticism, K. 183 is more satisfactorily regarded as being part of a sudden wave of minor-key symphonies which appeared in the late 1760s and early 1770s. Among others, Vanhal, Ordonez, and Joseph Haydn produced during this period a number of minor-key works characterized by stormy drama and restlessness of spirit, attributes which have led some to refer to them as "Sturm und Drang" (storm and stress) pieces. (The name comes from that of a literary movement which was so called slightly later.) In particular, attention has been drawn to the relationship of K. 183 to Haydn's Symphony No. 39 in G minor (late 1760s), with which it shares not only its key but also an orchestration that unusually includes four horns in addition to pairs of oboes and bassoons, and strings. Mozart's opening Allegro con brio and closing Allegro betray characteristics typical of the Sturm und Drang style, a nervous drama articulated by considerable use of tremolando and restless, angular melodies. Between these two large-scale sonata-form movements come an Andante in E flat which gives vent to more introverted passions, and a terse and stern Minuet which strays far from the courtly origins of the dance; its Trio section in G major is scored for wind instruments alone.