By: Traditional - arr. Peter Hargreaves 2020
For: Brass band
This music is in your basket
View basket
Loading... 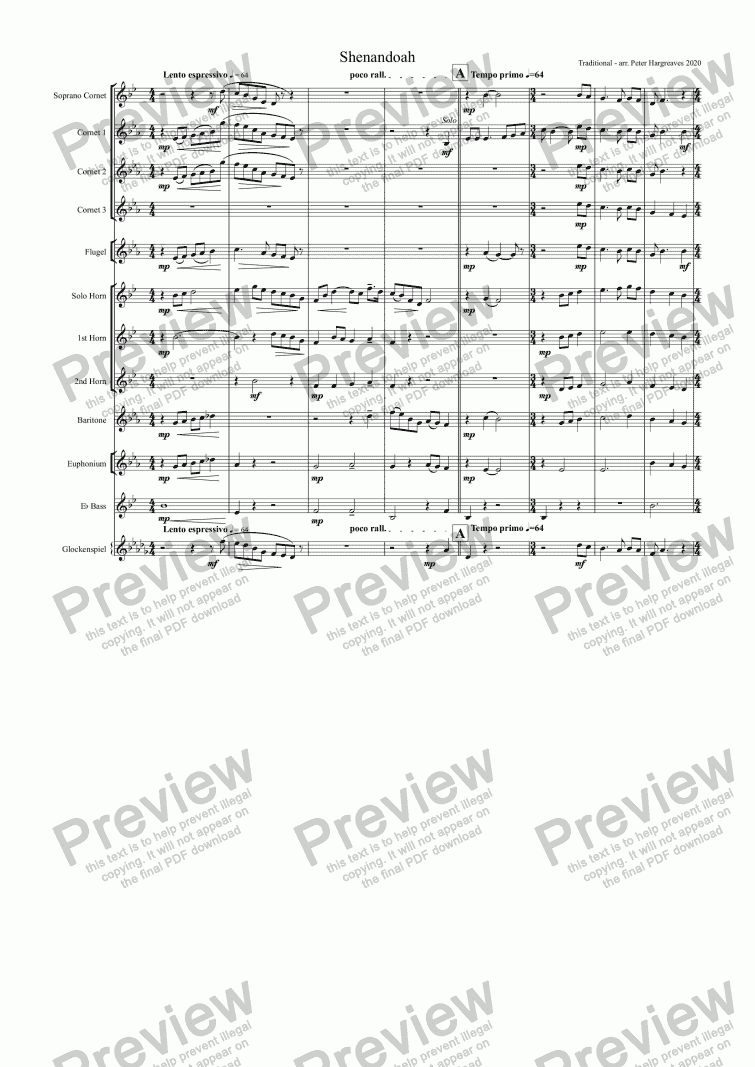 Composer
Traditional - arr. Peter Hargreaves 2020
Arranger
Peter Hargreaves
Year of arrangement
2020
Difficulty
Moderate (Grades 4-6)
Duration
1 minute
Genre
Other
License details
For anything not permitted by the above licence then you should contact the publisher first to obtain permission.

"The melody has the roll and surge and freedom of a tall ship sweeping along before a trade wind. The sonorous succession of long vowels and soft and liquid consonants blend perfectly with the romantic air. The lines are a call from the homeland to the sailor wandering far out across the seas, a call not from a sweetheart, a house, or even a town, but from the land itself, its rivers and its familiar and loved hills."

The conventional account of the origins of “Shenandoah” says that it was first sung by fur trappers and traders — “voyageurs” — who ventured west and encountered Native Americans in the early 19th century. In these versions the song tells of a trader who falls in love with Sally (sometimes Nancy), the daughter of Shenandoah, a Native American chief. Some folklorists have suggested that the song was inspired by the life of Jim Bridger, a legendary mountain man and trapper whose survivalist escapades were portrayed by Will Poulter in The Revenant. Some versions make no mention of “Sally”, or of Native Americans; they seem to be more about a longing for a place than for a person. It’s a leaving song.

By the late 19th century “Shenandoah” had become, quite literally, a “floating song”, making its way down river to the sea, where it became a capstan song, sung on ships while the anchor was hauled up. Some observers suggest that it seems slow for a sea shanty, but it’s not hard to imagine a group of sailors heaving a rope while singing “Away, you rolling river”. Individuals would take it in turn to sing the verses, and invent new ones.

Oh Shenandoah, I love your daughter Away, you rollin' river For her I'd cross the stormy waters Away, we're bound away Across the wide Missouri