By: Valerius
For: Brass quintet
This music is in your basket
View basket
Loading... 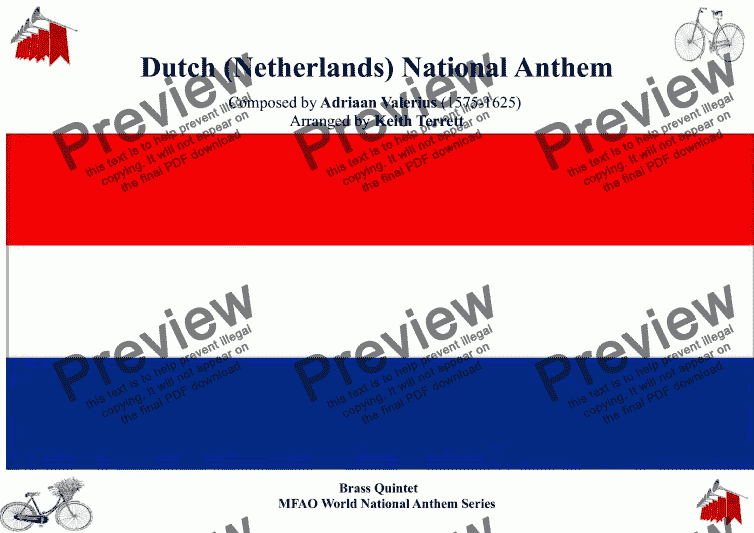 By: Valerius
For: Brass quintet

Composer
Valerius
Year of composition
1572
Arranger
Keith Terrett
Year of arrangement
2006
Publisher
Music for all Occasions
Difficulty
Moderate (Grades 4-6)
Duration
1 minute
Genre
Classical music
License details
For anything not permitted by the above licence then you should contact the publisher first to obtain permission.

An arrangement of the Dutch National Anthem for Brass Quintet.

There is some international confusion concerning the oldest anthem in the world. The Japanese anthem, Kimi ga yo, has the oldest (9th century) lyrics, but a melody was added in the late 19th century making it a poem rather than an anthem for most of its lifespan. Although the Wilhelmus was not officially recognised as the Dutch national anthem until 1932 (compare this to the British national anthem "God Save the Queen", which has never been officially recognised as the national anthem it is the oldest in the world. The anthem was first written down in 1574 making it over 435 years old.

William the Silent (William I) leader and icon of the Dutch revoltThough only proclaimed the national anthem in 1932, the Wilhelmus already had a centuries-old prior history. It had been sung on many official occasions and at many important events since 1568, such as the siege of Haarlem in 1573 and the ceremonial entry of the Prince of Orange into Brussels on 18 September 1578.

During the Dutch Golden Age, it was conceived essentially as the anthem of the House of Orange-Nassau and its supporters - which meant, in the politics of the time, the anthem of a specific political faction which was involved in a prolonged struggle with opposing factions (which sometimes became violent, verging on civil war). Therefore, the fortunes of the song paralleled those of the Orangist faction.

Trumpets played the Wilhelmus when Prince Maurits visited Breda, and again when he was received in state in Amsterdam in May 1618. When William V arrived in Schoonhoven in 1787, after the authority of the stadholders had been restored, the church bells are said to have played the Wilhelmus continuously.

After the Batavian Revolution, inspired by the French revolution, it had come to be called the "Princes’ March" as it was banned during the rule of the Patriot party, which did not support the House of Orange-Nassau.

However, at the foundation of the Kingdom of the Netherlands in 1813, the Wilhelmus had fallen out of favour. Having become monarchs with a claim to represent the entire nation and stand above factions, the House of Orange decided to break with the song which served them as heads of a faction, and the Wilhelmus was hence replaced by Hendrik Tollens’ song Wien Neêrlands bloed door d’aderen vloeit, which was the official Dutch anthem from 1815 till 1932.

However, the Wilhelmus remained popular and lost its identification as a factional song, and on 10 May 1932, it was decreed that on all official occasions requiring the performance of the national anthem, the Wilhelmus was to be played - thereby replacing Tollens’ song.

Origins of the melody:

The tune of the Wilhelmus is based on a French soldiers’ song: "Autre chanson de la ville de Chartres assiégée par le prince de Condé" (English: "Another song about the city of Chartres under siege by the Prince de Condé"), which was popular around 1569 during the siege of Chartres.

Ironically, during this siege (which took place at the time of the French Wars of Religion, essentially a civil war between France’s Protestant and Catholic inhabitants) the Protestant besiegers of the pro-Catholic city of Chartres had to break up their siege.

However during the siege, the song had been quite popular with the Catholics of Chartres, and the Protestants started to sing the song as well and spread it to the Low Countries. Therefore the melody of Het Wilhelmus is older than the lyrics. The melody was further developed by a famous Dutch composer Adriaen Valerius (approx. 1575-1625) who made the melody’s pace much slower, most likely to allow it to be sung in churches. The current official version is the arrangement by Walther Boer, dating from 1932.

Origins of the lyrics:

The origins of the lyrics are less clear than those of the anthem’s melody; till this day no one knows who exactly wrote the Dutch anthem. Soon after the anthem was finished it was said that either Philips van Marnix, a writer and statesman, former mayor of the city of Antwerp, or Dirck Coornhert, a politician and theologian, wrote the anthem. However, this is disputed as both Marnix and Coornhert never mentioned they created the lyrics, which is strange given the fact that the song was immensely popular in their times. The Wilhelmus also has some odd rhymes in it. In some cases the vowels of certain words were altered to allow them to rhyme with other words. Some see this as evidence that neither Marnix or Coornhert wrote the anthem as they were both experienced poets at the time that the Wilhelmus was written and they would not take these small liberties. Hence some believe the lyrics of the Dutch national anthem were the creation of someone who just wrote one poem for the occasion and then disappeared from history. A French translation of the Wilhelmus appeared around 1582.

Het Wilhelmus is played only once at a ceremony or whatever other event and, if possible, it is to be the last piece of music to be played. When receiving a foreign head of state or emissary, the Dutch anthem is not allowed to be played if there is no member of the Dutch Royal House present, this is virtually unique in the world as most countries play their own anthem and then play the anthem of the foreign relation.

During international sport events, such as the World Cup, UEFA Euro, and the Olympics the Wilhelmus is also played. In nearly every case the 1st and 6th stanza, or the 1st stanza alone, are sung/played rather than the entire song, which would result in about 15 minutes of music.

Legends: It has been claimed that during the gruesome torture of Balthasar Gérard (the assassin of William of Orange) in 1584, the song was sung by the guards who sought to overpower Gérards screams when boiling pigs fat was poured over him. Gérard allegedly responded "Sing! Dutch sinners! Sing! But know that soon I shall be sung of!".

Another legend claims that following the Navigation Acts (an ordinance by Oliver Cromwell requiring all foreign fleets in the North Sea or the Channel to dip their flag in salute) Het Wilhelmus was sung (or rather, shouted) by the sailors on the Dutch flagship Brederode in responds to the first warning shot fired by an English fleet under Robert Blake, when their captain Maarten Tromp refused to lower his flag. At the end of the song, which coincided with the third (i.e last) English warning shot, Tromp fired a full broadside thereby beginning the Battle of Goodwin Sands and the First Anglo-Dutch War.

An instrumental recording of Het Wilhelmus by the United States Navy Band, played slightly too fast.

The complete text comprises fifteen stanzas. The anthem is an acrostic: the first letters of the fifteen stanzas formed the name ’Willem van Nassov’ (Nassov was a contemporary orthographic variant of Nassau). In the current Dutch spelling the first words of the twelfth and thirteenth stanzas begin with Z instead of S.

The text is also thematically symmetrical, in that verses one and 15 resemble one another in meaning, as do verses two and 14, three and 13, etc., until they converge in the eighth verse, the heart of the song: "Oh David, thou soughtest shelter/From King Saul’s tyranny".

There are two major variations on the Wilhelmus, namely the royal anthem of Luxembourg (called "De Wilhelmus") and the song "Das Treuelied", German for "the song of loyalty". The Royal Anthem of Luxembourg, in official use since 1919, has a shared origin with the Dutch anthem. The melody was first used in Luxembourg (at the time in personal union with the Kingdom of the United Netherlands) on the occasion of the visit of the Dutch King and Grand Duke of Luxembourg William III in 1883. Later, the anthem was played for Grand Duke Adolph of Luxembourg along with the national anthem. The melody is very similar, but not identical to that of Het Wilhelmus. The second major variation is the song "Wenn alle untreu werden" (German: "If everyone becomes unfaithful") better known as "Das Treuelied", which was written by the poet Max von Schenkendorf (1783-1817) and used the exact same melody as Het Wilhelmus. After the First World War this became extremely popular among nationalistic German groups, especially the Nazis. It became one of the most popular songs of the SS, together with the Horst Wessel song.

Het Wilhelmus was first printed in a "geuzenliedboek" (lit.: "song book of the Gueux") in 1581. It used the following text as an introduction to the Wilhelmus:

A new Christian song made in the honour of the most noble lord, lord William Prince of Orange, count of Nassau, Patris Patriae (Father of the Fatherland), my merciful prince and lord. [A song] of which the first capital letter of each stanza form the name of his merciful prince. To the melody of Chartres.