By: Schumann
For: Brass quintet
This music is in your basket
View basket
Loading... 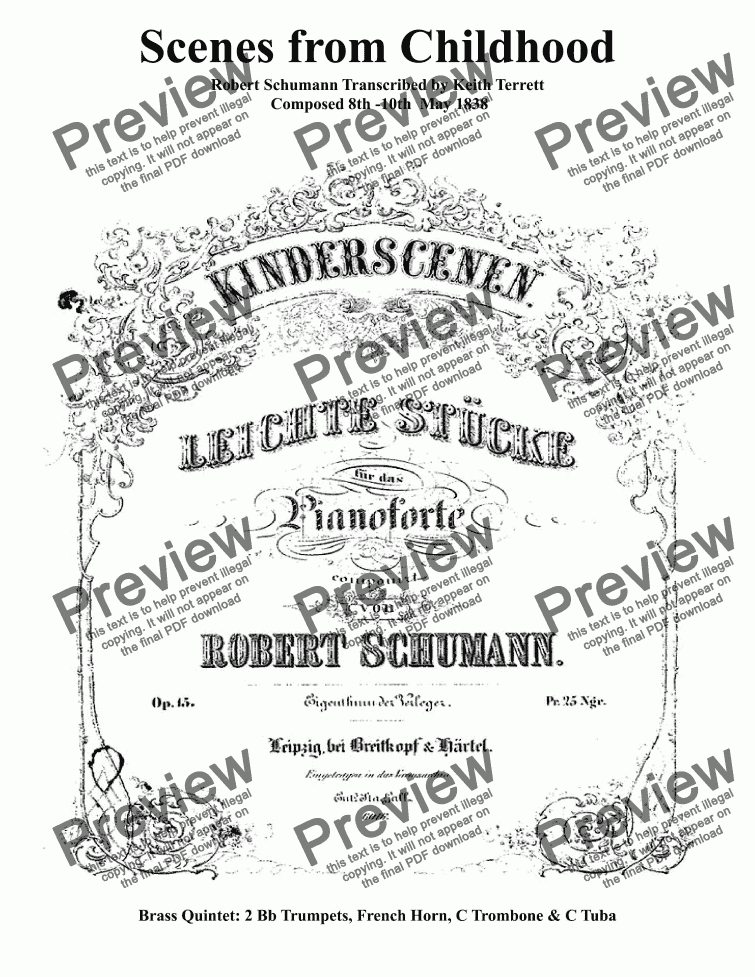 By: Schumann
For: Brass quintet

Composer
Schumann
Year of composition
1838
Arranger
Keith Terrett
Year of arrangement
2009
Publisher
Music for all Occasions
Difficulty
Difficult (Grades 7+)
Duration
13 minutes
Genre
Classical music
License details
For anything not permitted by the above licence then you should contact the publisher first to obtain permission.

Kinderszenen (German pronunciation: [ˈkɪndɐˌst͡seːnən], "Scenes from Childhood"), Op. 15, by Robert Schumann, is a set of thirteen pieces of music for piano written in 1838.

Schumann wrote 30 movements for this work but chose 13 for the final version. The unused movements were later published in Bunte Blätter, Op. 99, and Albumblätter, Op. 124. Schumann initially intended to publish Kinderszenen together with Novelletten (Opus 21); the shared literary theme is suggested by the original title Kindergeschichten (Children's Tales). He told his wife Clara that the "thirty small, droll things", most of them less than a page in length, were inspired by her comment that he sometimes seemed "like a child". He described them in 1840 as "more cheerful, gentler, more melodic" than his earlier works.

Movement No. 7 of the work, Träumerei, is one of Schumann's best known pieces; it is the opening and closing musical theme of the 1947 Hollywood film Song of Love, and Träumerei is the title of a 1944 German biographical film on Schumann. In Russia, a hummed choral a cappella version became known as mourning music, being played annually during the Minute of Silence on Victory Day.

Originally called Leichte Stücke ("Easy Pieces"), the section titles were only added after the completion of the composition, and Schumann described them as "nothing more than delicate hints for execution and interpretation". Timothy D. Taylor, however, has discussed the choice of titles for this work in the context of the changing situation of music culturally and economically, stating that the final movement, entitled Der Dichter spricht (The Poet Speaks), marked a realisation among composers that, due to the decline of patronage structures in the 19th century, their musical works must take on new meanings.

There is no known complete manuscript of Kinderszenen.

Scenes From Childhood (Kinderscenen), Opus 15 is a set of 13 pieces of music that Schumann wrote for Piano in 1838. They are his reminiscences of childhood and have been beautifully scored for Brass Quintet by Keith Terrett. The most well known of the movements is Tråumerei (Dreaming) and has been used in movies to portray love scenes because of its tenderness and beauty. The music is for advanced performers and the collection contains close to 20 minutes of some very sublime & poetic music. Any of these pieces can be inserted into a recital program.

Reviews of Scenes from Childhood (Kinderszenen) Op15, for Brass Quintet