The Whirligig of Time (from 'Triptych: Honor Oak Park') 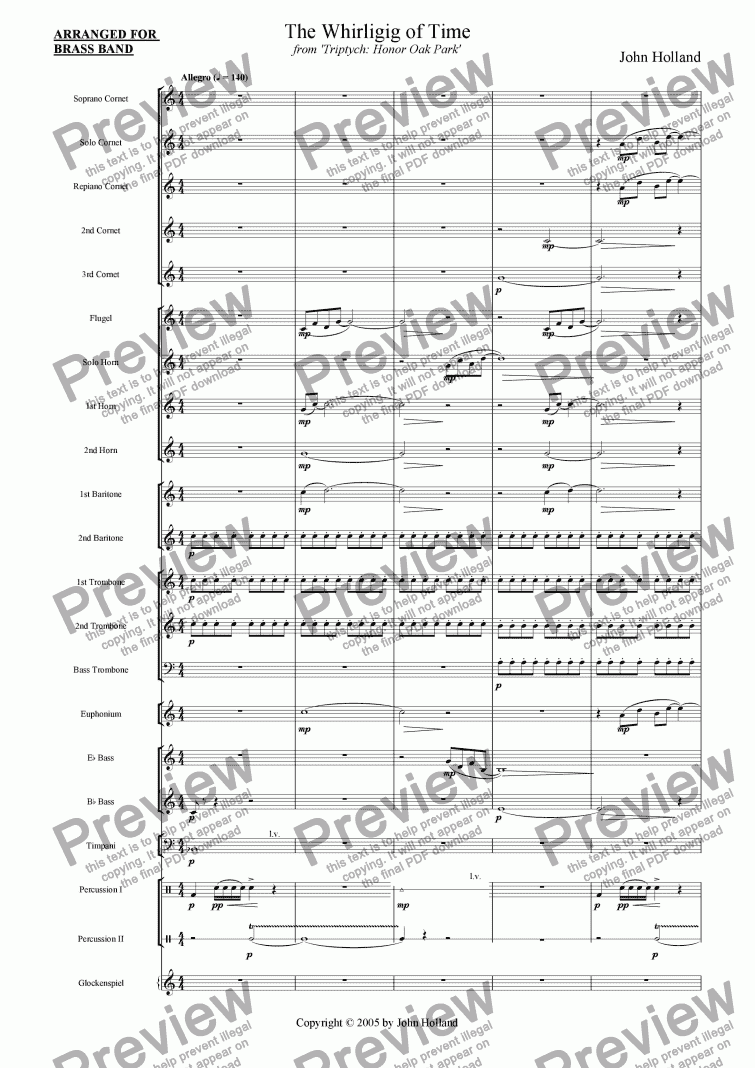 Originally written for symphonic concert band, adapted and arranged for brass band. 'The Whirligig of Time' is the opening movement of 'Triptych: Honor Oak Park'.

Allegedly, the name of Honor Oak was bestowed upon the area by Queen Elizabeth I, who may have rested and picnicked there in 1602. This piece remembers some of the people and events throughout history that have shaped the landscape of this attractive area of London and made it a unique home for music and musicians in the capital.

The movement opens with a striking four-note fanfare (based on the concept of �honour�), which is passed among various groups, introducing snatches of melody to be developed later. This settles into a bawdy folk dance, such as might have been heard in the old Honor Oak Tavern. A harmonic shift gives the soloists a chance to shine, passing the frenzied melody from Soprano Cornet, down the line right back up to the top again over a bed of relentlessly unsettled quavers. Another intricate dance figure follows - jauntier than the last - in complex time, alluding to a more modern life in London. A fugue begins, based on the two dance themes, bringing past and present together. Another short fanfare heralds the return of some thematic ideas from the opening, building towards the final dramatic flourish.

In order to submit this score to ScoreExchange.com John Holland has declared that they own the copyright to this work in its entirety or that they have been granted permission from the copyright holder to use their work. If you believe that this score should be not available here because it infringes your or someone elses copyright, please report this score using the copyright abuse form.

Reviews of The Whirligig of Time (from 'Triptych: Honor Oak Park')