By: Arthur Sullivan
For: Solo instrument (Piano)
This music is in your basket
View basket
Loading... 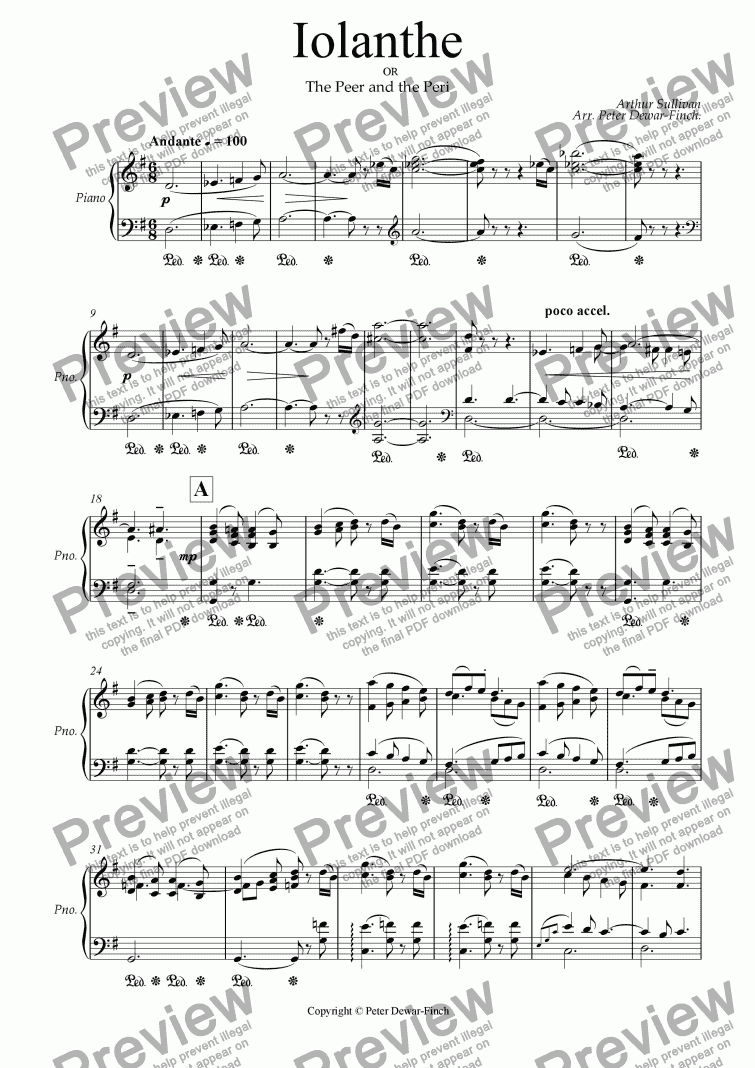 Composer
Arthur Sullivan
Arranger
Peter Dewar-Finch
Lyricist
none
Difficulty
Moderate (Grades 4-6)
Duration
6 minutes
Genre
Classical music
License details
For anything not permitted by the above licence then you should contact the publisher first to obtain permission.

In the 1970�s - 1980�s I was a member of two or three Operatic Societies, performing a wide range of music, but especially Gilbert and Sullivan. Iolanthe (1882) was one of those Operettas I performed in. I was a Principal Performer in a number of Operettas, but I was only a Chorister in Iolanthe.

It was a great experience, - �the roar of the greasepaint, the smell of the crowd!� I even got to sign some autographs. There was one memorable occasion when some �wag� took our greasepaint remover home and myself and a few other male members of the choir had to go home on a bus in full greasepaint, one busy Friday night through all of the drunken Friday night revellers. We looked like caricatures of Quentin Crisp, earning us some ribald remarks and wolf whistles!

There is nothing I can say about Gilbert and Sullivan which has not been said before. But on THIS interpretive �copy� of the original piano arrangement I have tried to interpret it as I would play it.

Arthur Seymour Sullivan (1842-1900) �is probably still the most widely known of all English composers. His fame was founded upon his theatrical partnership with William Schwenk Gilbert, but as the composer of many choral and orchestral works he was a leading figure in his own right in the musical life of Victorian England. His diaries and letters, only recently available for public scrutiny, throw a completely new light on the life of a Victorian composer and conductor who was born the son of a military bandmaster and came to dominate the London scene.�