By: Rossini
For: Quartet of Flutes
This music is in your basket
View basket
Loading... 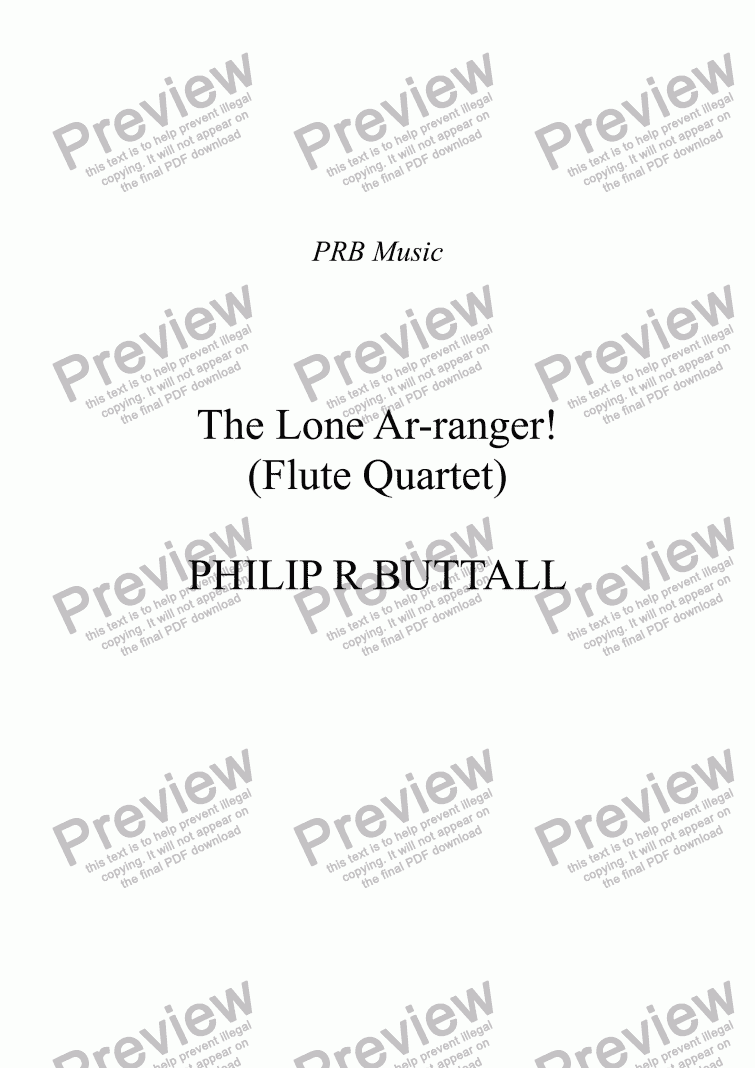 By: Rossini
For: Quartet of Flutes

Composer
Rossini
Year of composition
2006
Arranger
Philip R Buttall
Publisher
PRB Music
Difficulty
Difficult (Grades 7+)
Duration
3 minutes
Genre
Classical music
License details
For anything not permitted by the above licence then you should contact the publisher first to obtain permission.

Some time ago, I received an email from Lisa Ochoca, telling me that the flute quartet that she’s in (Flutando) had just played at Tryon Creek, Portland, Oregon, where The Lone Ar-ranger! was part of their repertoire. Lisa writes:
I just wanted to thank you for letting us perform this fun piece. It’s a joy to play and we had great comments about it from our audience afterwards. I’m sending you a recording of it. It’s not a great recording - we were under a gazebo outdoors and yesterday just happened to be an unusually cold day (which isn’t too surprising for Portland, Oregon, but it wasn’t supposed to be THAT cold). So, some fingers weren’t cooperating at times. Hope you enjoy it anyway!
Lisa’s group had, in fact, played the version I had made for Recorder Quartet, adjusting some of the lines to accommodate the different ranges of flutes and recorders - I’ve attached Lisa’s recording with Flutando to the Recorder version, as an MP3 file.
I sent this over to a very dear friend and flute teacher, Anne Kimber (see photo), who teaches at a number of prestigious schools in South West England. Anne, who is also the conductor of Plymouth Symphony Orchestra, was delighted with the recording, and wanted me to send her the parts for some of her students at Wells Cathedral School. However, as this was really an amended version for Recorders, I decided to revamp the arrangement slightly, to suit the ranges of four concert flutes, and will be sending this new version to Anne and her students. I’m sure she’ll get around to making a recording of it for me soon, but in the meantime the attached MP3 file here is courtesy of Garritan Personal Orchestra.
Following a number of requests worldwide, I have now uploaded a special non-playing score, which lists, and identifies all the tune fragments used in The Lone Ar-ranger!
Click here for further information.

N.B. In the present economic climate, a good number of smaller ensembles understandably buy just the set of parts as, in reality, these alone are all that is needed in performance. Equally, a similar number buy both the parts and the full score. To compensate for this, I intend to reduce the cost of the full score by $4, and increase the price of the lead part by $3, a differential that wasn't available to sellers at the former SibeliusMusic.com.