By: Harry Sdraulig
For: Worksheets
This music is in your basket
View basket
Loading... 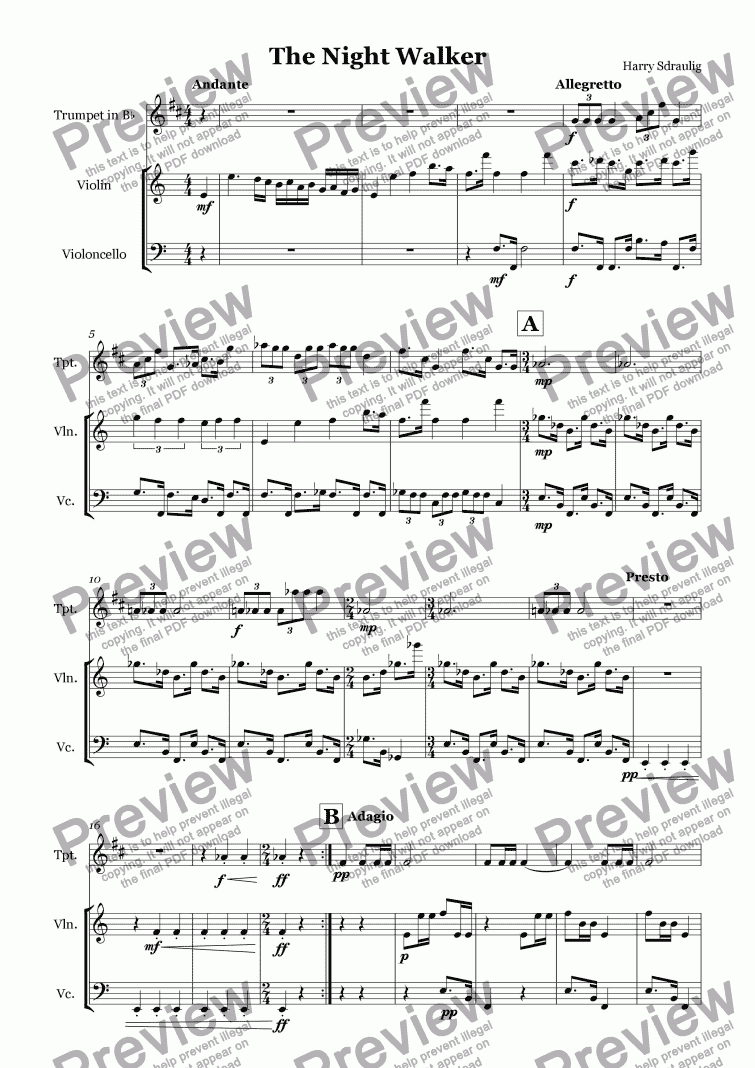 By: Harry Sdraulig
For: Worksheets

Composer
Harry Sdraulig
Year of composition
2006
Lyricist
none
Publisher
Balwyn High School
Difficulty
Difficult (Grades 7+)
Duration
5 minutes
Genre
Modern classical music
License details
For anything not permitted by the above licence then you should contact the publisher first to obtain permission.

This piece was composed for the 2006 Balwyn High School Composition Scholarship and, because of access to only a few musicians of various instruments, was scored for trumpet, violin and cello. Originally it was intended that my other sister, Nonni Sdraulig, would cover the violin part but she unfortunately had to cancel in the event of a cut finger on the day of the first rehearsal. It was at the scholarship final that this work was premiered by Jess Hillman on violin, myself on trumpet and Eliza Sdraulig on cello - surprisingly enough, it succeeded in winning first place, although the actual performance on my part was less than satisfying. Thankfully, Jess Hillman and Eliza Sdraulig played the work superbly. A recording from a rehearsal leading up to this performance has been uploaded.

The title of this piece carries little significance in a programmatic sense, but was intended to act as a descriptor of the general character of the piece, and the relation between the character of the piece and the activities of various forms of life that go on by night, as well as by day, going unnoticed by human beings. There are many abrupt tempo changes - moments of violence contrast with moments of mysterious emotional detachment.

Of upmost importance to the work is a harsh tonal conflict between the key of E, the key of F, the key of F#/Gb and, much more infrequently, the key of A. Also prominent is the interval of the augmented fourth. The work begins in the key of E, but in the second bar drifts into F. The violence first begins at bar 4 (Allegro feroce), with the cello insisting on the key of F despite being swayed in various directions by the violin and trumpet. In bar 6, the violin unsuccessful attempts to instill E, but is drawn quickly back into F. At letter [A] the key of F remains dominant, although the top note of the cello ostinato, E, tries to dominate. At the same time, the trumpet is insistant on the note F#, which makes its first appearance as a conflicting factor. Thus tritonality is achieved and sustained for several bars; at bar 15 a significant motive appears in which all three notes are gradually piled on top of each other, creating a three-note semitonal clash.

At letter [B] the atmosphere changes dramatically, and the conflict is still present but seems to have died down as though the various keys are quietly plotting to attack eachother. The trumpet insists on E, and the violin and cello are unable to decide - the violin sways towards E but the cello sways towards F. Gradually it becomes apparent that E is beginning to win the battle - by bar 36, the music is clearly in E minor, and this "lento misterioso" section indeed ends with all the instruments on a sustained E.

But the other keys are not so easily tamed, and the motive that appeared at bar 15 returns, with all three notes piled up on top of each other. The violin works hard to establish the key of F major (bar 44) but fails, and the music briefly swings randomly into A minor at letter [C], a key which has been hinted at at various stages but has never had a chance of establishing itself. The "Allegro feroce" section makes its last appearance at letter [D], the cluster motive reappearing once more at bar 65, before the music collapses into a section titled "Poco andante".

Here the key of F#/Gb dominates, as well as the augmented fourths in a cold melody which insists on the note F#/Gb. Es are hinted in the simple accompaniment but never get a grip on proceedings and, suprisingly enough, A minor returns at letter [F]. Inevitably enough, A minor fails, and F#/Gb dominates again. A recapitulation of the material at letter [C] occurs at letter [G], but quickly collapses into a solemn coda which appears to be drifting into a new contender - Ab - as the augmented fourths become prominent again. But not for long, as at bar 111 all the instruments seem centred on E, although with great uncertainty. From this point on, to nearly the end, the violin sustains a cool F. Yet the cello does not seem convinced, and drifts into E. But the last chord is a solemn two-note chord - A and E - and, inevitably enough, A does not deserve victory and E gets the final word.

This work was subsequently arranged for clarinet, violin and cello in order to fulfil the criteria of the Australian Sibelius Young Composer Awards in 2008.

Reviews of The Night Walker