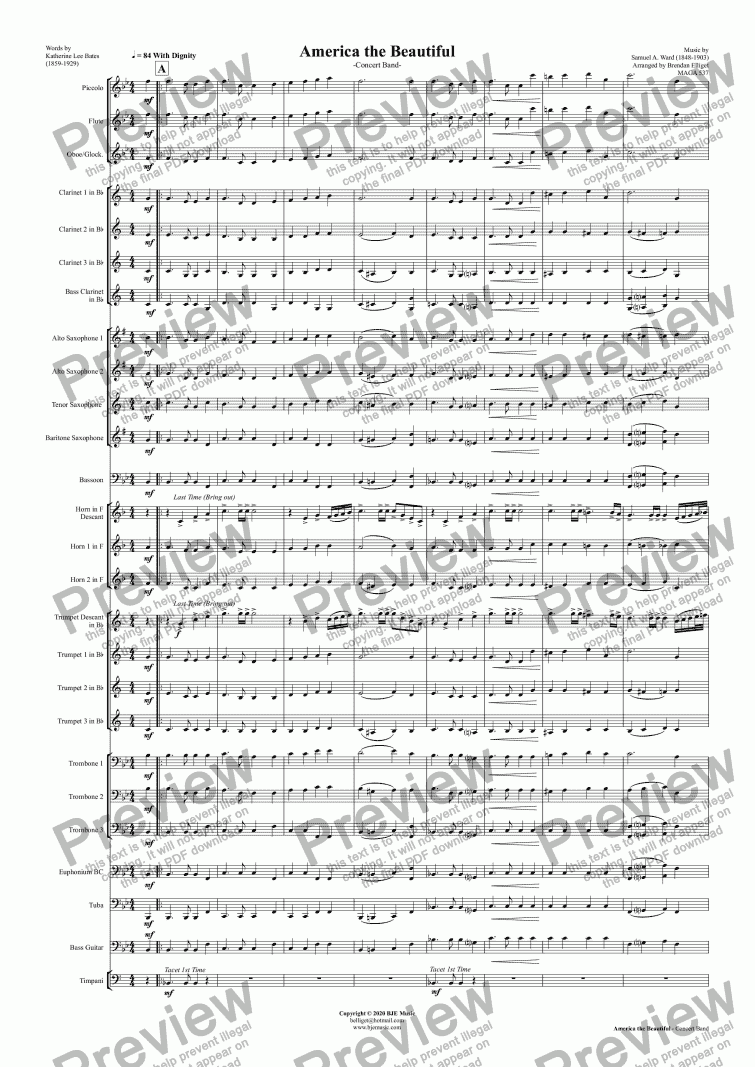 Composer
Music by Samuel A. Ward (1848-1903) Arranged by Brendan Elliget MAGA 537
Year of composition
1895
Arranger
Brendan Elliget
Year of arrangement
2020
Difficulty
Easy (Grades 1-3)
Duration
2 minutes
Genre
Other
License details
For anything not permitted by the above licence then you should contact the publisher first to obtain permission.

"America the Beautiful" is an American patriotic song. The lyrics were written by Katharine Lee Bates, and the music was composed by church organist and choirmaster Samuel A. Ward at Grace Episcopal Church in Newark, New Jersey. The two never met. Bates originally wrote the words as a poem, "Pikes Peak", first published in the Fourth of July edition of the church periodical The Congregationalist in 1895. At that time, the poem was titled "America" for publication. Ward had originally written the music, "Materna", for the hymn "O Mother dear, Jerusalem" in 1882, though it was not first published until 1892. Ward's music combined with the Bates poem was first published in 1910 and titled "America the Beautiful". The song is one of the most popular of the many U.S. patriotic songs. [Wikipedia]

The MP3 was recorded with NotePerformer 3 - There are 3 verses:

1. Clarinets only then Flutes and Saxophones successively added during this 1st verse

2. All Brass and Percussion added for the 2nd verse.

3. Full Band with the Descant line played by a Solo Trumpet and Solo F Horn in the 3rd verse