By: Kenton Scott
For: Concert band / wind band
This music is in your basket
View basket
Loading... 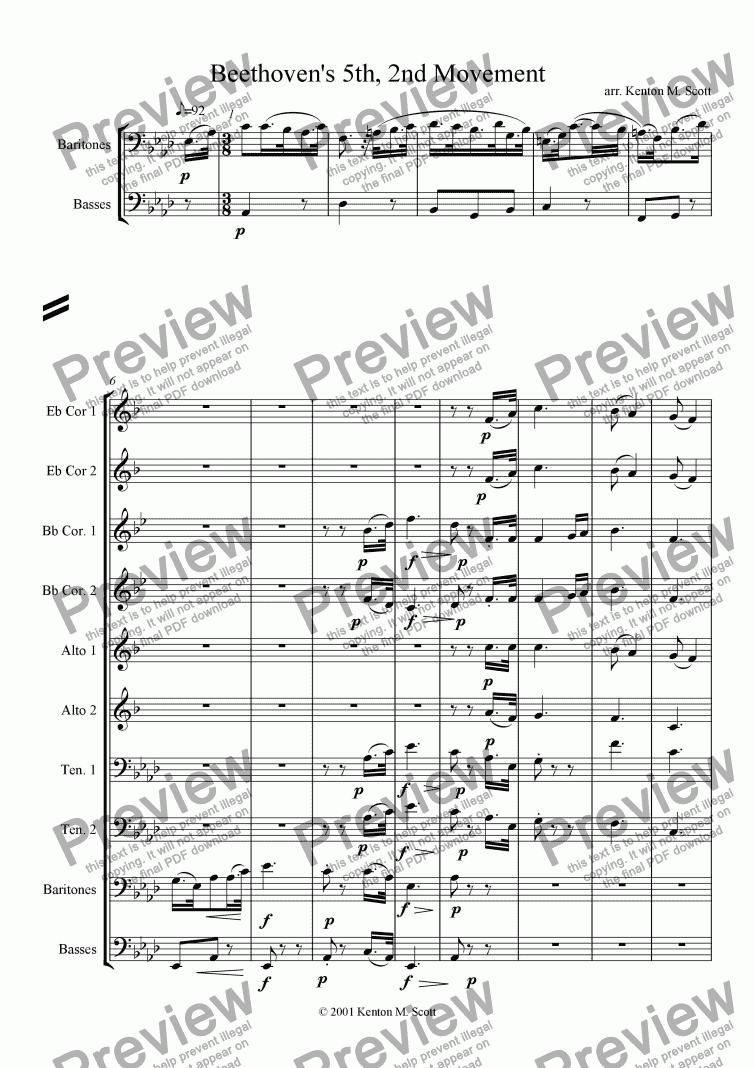 Composer
Kenton Scott
Year of composition
2000
Arranger
Kenton Scott
Lyricist
none
Publisher
Scott Office Solutions
Difficulty
Moderate (Grades 4-6)
Duration
8 minutes
Genre
Other
License details
For anything not permitted by the above licence then you should contact the publisher first to obtain permission.

This project was the result of speculating what might have happened in the mid-1800&#8217;s as established musicians were confronted with saxhorn bands. I think it is clear from the history that the relationship between the two was not always harmonious. And, as is the case with any emerging technology, those who are investing in the older technology feel a combination of sentiments ranging from feeling threatened that their skills are going to be rendered useless to a genuine concern that the old way is somehow superior and is going to be lost.

In that light, I imagined a conversation that could have taken place between an orchestral musician and a member of a saxhorn band sometime in the first half of the 19th century. It went like this:

[Orchestral musician] &#8220;I just don&#8217;t think that saxhorn bands represent serious music. They don&#8217;t have the capacity to play the music of the orchestra. Now, I will acknowledge that the writers for the saxhorn bands have done a good job of transcribing piano music. But, there is a fundamental difference between the relatively simple quicksteps played on a piano and the complex scoring of an orchestral selection.&#8221;

[Saxhorn musician] &#8220;I understand what you are saying, but I disagree. The saxhorn band lacks two things the orchestra has &#8211; 1) the extreme high and low ranges and 2) the different tone colors.

Secondly, the different tone colors are as much of a disadvantage as they are an advantage. And, while it is true that the different instruments of the saxhorn band sound similar, they do not sound the same. I also want to note that the orchestra often has to double parts to get the power they need. When this is done the tone color aspect of the music disappears. And, while the band can play softly, it is also true that a single baritone can overwhelm a whole bevy of cellos!

And, to prove my point, I am going to re-score a piece of orchestral music for saxhorn band so you can hear the capabilities of the ensemble. I am going to select a composition by Beethoven that will show both quiet and powerful inflections of the band. Some adjustments and compromises will have to be made, but I suspect that you will find the overall result entirely acceptable.&#8221;

Sorry, there's no reviews of this score yet. Please .
In order to submit this score to ScoreExchange.com Kenton Scott has declared that they own the copyright to this work in its entirety or that they have been granted permission from the copyright holder to use their work. If you believe that this score should be not available here because it infringes your or someone elses copyright, please report this score using the copyright abuse form.