The Merry Wives of Windsor - Overture

By: Otto Nicolai
For: String quartet
This music is in your basket
View basket
Loading... 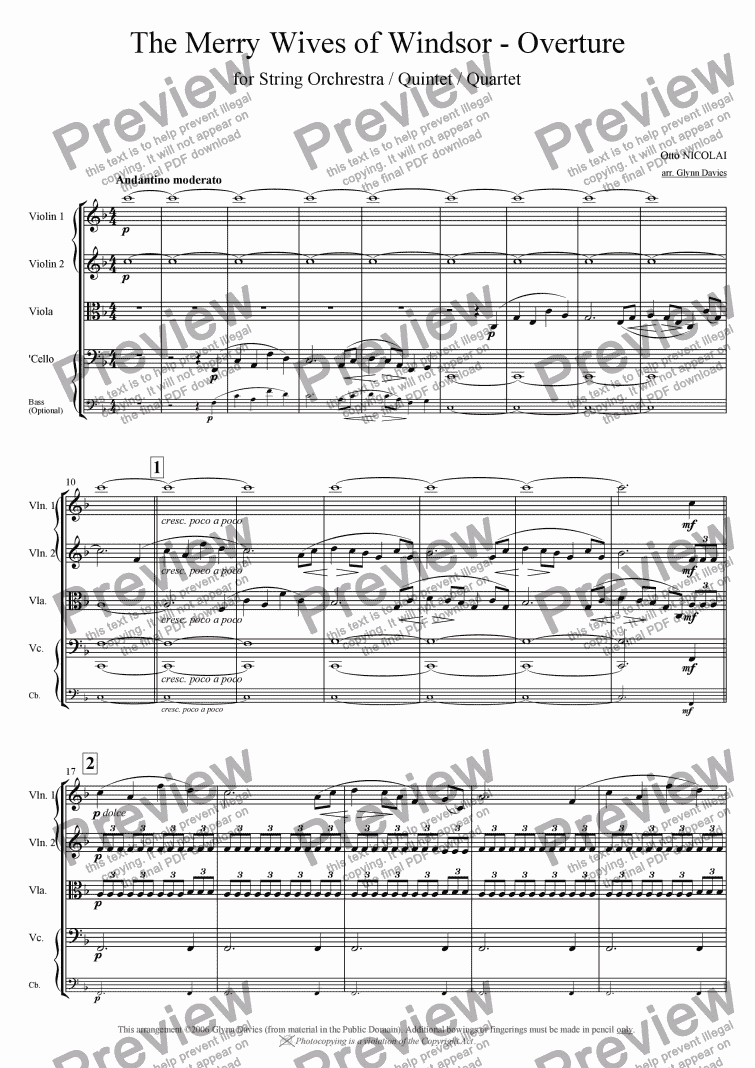 The Merry Wives of Windsor - Overture

By: Otto Nicolai
For: String quartet

Composer
Otto Nicolai
Year of composition
1849
Arranger
Glynn Davies
Difficulty
Difficult (Grades 7+)
Duration
7 minutes
Genre
Classical music
License details
For anything not permitted by the above licence then you should contact the publisher first to obtain permission.

Otto Nicolai (1810-1849) became one of the few "one-hit wonders" among classical composers. Although some of his operas had success during his lifetime, it is really only his final opera, The Merry Wives of Windsor, that has become a repertory item, and then for the most part only in German-speaking countries. This tuneful and lighthearted overture is probably the only Nicolai music that most people have heard. Nicolai was born in Konigsberg, a German city so far east that it is now part of Russia. He revered Mozart and sought to emulate his elegance, clarity of form, and novelty of orchestration. After studies in Berlin, he went on to Italy, where he learned much about vocal music, the great polyphonic pieces of the Renaissance, and the new bel canto operatic style of Bellini and Donizetti. After achieving initial success in Italy, Nicolai made his career in Vienna, where in 1842 he became the founding conductor of what was then called the Philharmonic Concert Orchestra. His earlier opera Il templario had gained him success in several countries. Seeking a subject for his first opera originally in German, he resisted the idea of attempting a Shakespeare setting, but eventually did begin this opera based on the play of the same name. His aim, he wrote, was to continue the German operatic tradition, "…but Italian lightness must be added." He is far from the only composer to write an opera on the subject of the fat knight, Sir John Falstaff, and the comeuppance he gets from a pair of bourgeois wives when he tries to seduce them. The most famous of at least ten operas on the subject is Verdi's Falstaff, with Vaughan Williams' Sir John in Love probably coming in third place after the Nicolai work. Nicolai was crushed when the Court Opera of Vienna rejected it. He took the job of conductor of the Berlin Royal Opera in 1847, along with receiving an invitation to play the opera there. It was a rousing success from its first performance, March 9, 1849. He died of a cerebral hemorrhage on May 11, 1849. The overture is about eight minutes long. Almost a third of it is a slow, melodic introduction, which perhaps suggests the broad landscape the Thames-side town of Windsor. One of the two main melodies of the overture becomes associated later in the opera with Mrs. Page, and a heavy-footed subsidiary theme surely standing for Falstaff. The music is unfailingly bright and bubbling, without doubt the best comic opera overture by a Germanic composer since Mozart.

Reviews of The Merry Wives of Windsor - Overture