My account
Help Contact
HomeInstrumentationsString quartetGilbert & Sullivan - Songs from the Savoy Operas - The Pirates of Penzance: 'When a felon's not engaged in his employment' - arr. for Voices & String Quartet by Gerald Manning

Gilbert & Sullivan - Songs from the Savoy Operas - The Pirates of Penzance: 'When a felon's not engaged in his employment' - arr. for Voices & String Quartet by Gerald Manning 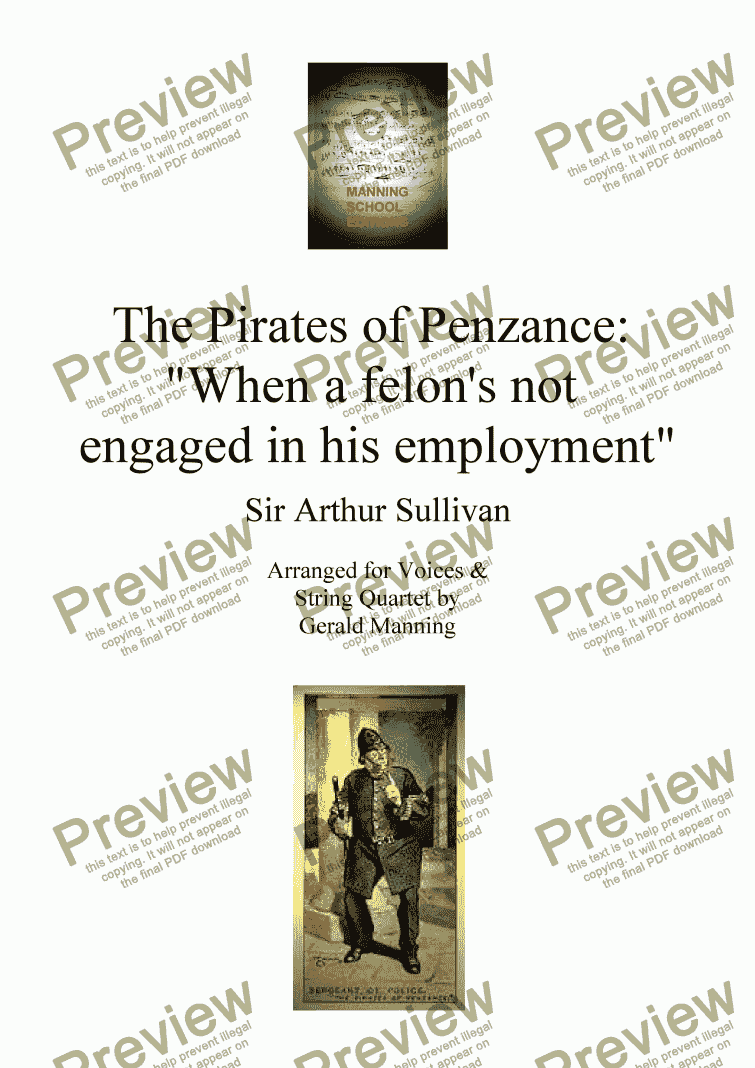 �When a felon�s not engaged in his employment� The Pirates of Penzance; or The Slave of Duty (The Fifth Avenue Theatre, New York, December 31, 1879; performance to secure British copyright at The Royal Bijou Theatre, Paignton, Devonshire, December 30, 1879)

The collaboration between English composer and conductor Sir Arthur Sullivan and the librettist Sir William Gilbert produced a distinctive style of �Opera Comique� where the marriage of words and music produced a mixture of parody, burlesque and satire that achieved immense popularity in Britain and the USA. Sullivan met Gilbert shortly after his first success with his one-act comic opera Cox and Box in 1867 and their collaboration began in 1871 with the now lost work Thespis. After the immense success of Trial by Jury in 1875 the impresario Richard D�Oyly Carte formed a new company specially to perform the works of Gilbert and Sullivan, but in 1881 while Patience was still running the company moved into the new Savoy Theatre � hence the sobriquet now attached to those operas after this date. The Pirates of Penzance was an immediate hit and takes its place today as one of the most popular and enduring works of musical theatre.

Reviews of Gilbert & Sullivan - Songs from the Savoy Operas - The Pirates of Penzance: 'When a felon's not engaged in his employment' - arr. for Voices & String Quartet by Gerald Manning