By: J.C.F. Fischer
For: Solo instrument (Organ [manuals])
This music is in your basket
View basket
Loading... 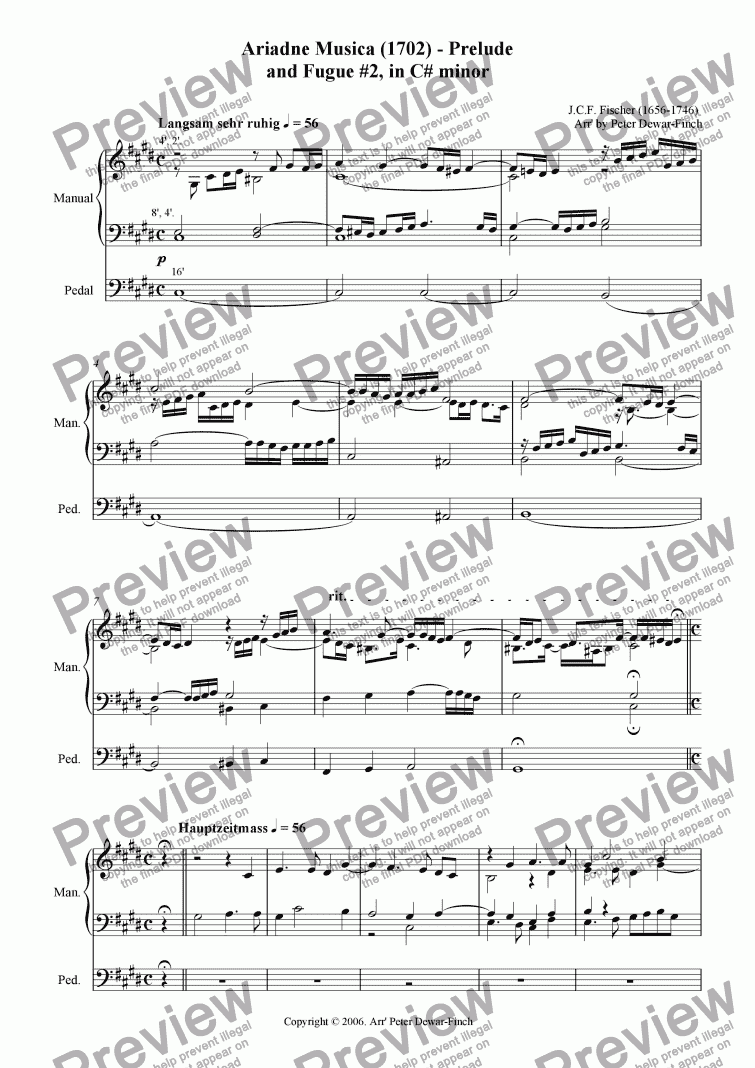 Composer
J.C.F. Fischer
Arranger
Peter Dewar-Finch
Lyricist
none
Difficulty
Moderate (Grades 4-6)
Duration
2 minutes
Genre
Classical music
License details
For anything not permitted by the above licence then you should contact the publisher first to obtain permission.

Ariadne Musica by Johann Caspar Ferdinand Fischer is perhaps the most seminal work in the development of classical music. And as all Western music systems are descended from it almost everything from Classical music to Rock, - Jazz to Pop and their �offspring� owe Fischer a debt of recognition. In my reinterpretation of the pieces I have endeavoured to keep the form as close to the originals as the digital medium will allow. For anyone wishing to play this series, these interpretations are fairly close to the originals, so any organist could do worse than to follow my tacit suggestions. It takes time to find each separate prelude and each separate fugue and to work out what sound was intended. My Hammond organ is less than ideal for the purpose, but as I don�t have a church pipe organ it will have to do. As I complete each reinterpretation for midi I will add them to this folder until I have amassed the whole set.

The title refers to the Greek myth in which Theseus is able to find his way out of the Minotaur's labyrinth by using a ball of thread which Ariadne, the daughter of King Minos of Crete, gave him. Similarly, the music in the collection can be said to guide the listener through a labyrinth of keys.

Johann Casper Ferdinand Fischer was not only very popular, but had great influence on the development of the musical life at the beginning of the 18th century. Bach's biographer Johann Nikolaus Forkel stated in 1802: "The most famous composers for piano of that time were Froberger, Fischer, Kerll, Pachelbel, Buxtehude, Bruhns, Bohm etc." And Max Seiffert concluded: "In his time, he was outstanding as one of the most distinguished and capable artists, and one cannot exclude him any longer from the place of honour as a forerunner of the great J. Sebastian Bach. From 1706 onwards Fischer worked at the court of the Margrave of Baden altogether for more than fourty years and became a part of musical history as one of the most important German composers of piano suites. Both Bach and Handel estimated Fischer�s works very much and adopted thematic and compositional-technical impulses from them.

Ariadne musica was written in a time when a new and richer system of temperaments in musical practice was developed. Whereas the former mean-tone temperament with its eight pure major thirds allowed only special keys as "pure" ones, many theorists and practical men around 1700 (like Werckmeister 1691) tried to make a greater number of keys possible through new systems of temperaments. This was made by distributing the pure and unequal ("well-tempered") fifths among the complete volume of tones. So for Fischer's Ariadne musica at least twenty keys can be used; however, not all of them are equally "pure"-tuned, for, with a growing number of accidentals in an unequal temperament, the keys seem to be considerably sharpened.

Bach's biographer, Forkel, had hardly exaggerated by saying that Fischer's Ariadne musica had inspired Bach to write the Wohltemperierte Klavier. In regard to their extent the fugues often correspond exactly to the preludes and take their motivic material from them.