By: Camille Saint-Saëns
For: Choir + keyboard
This music is in your basket
View basket
Loading... 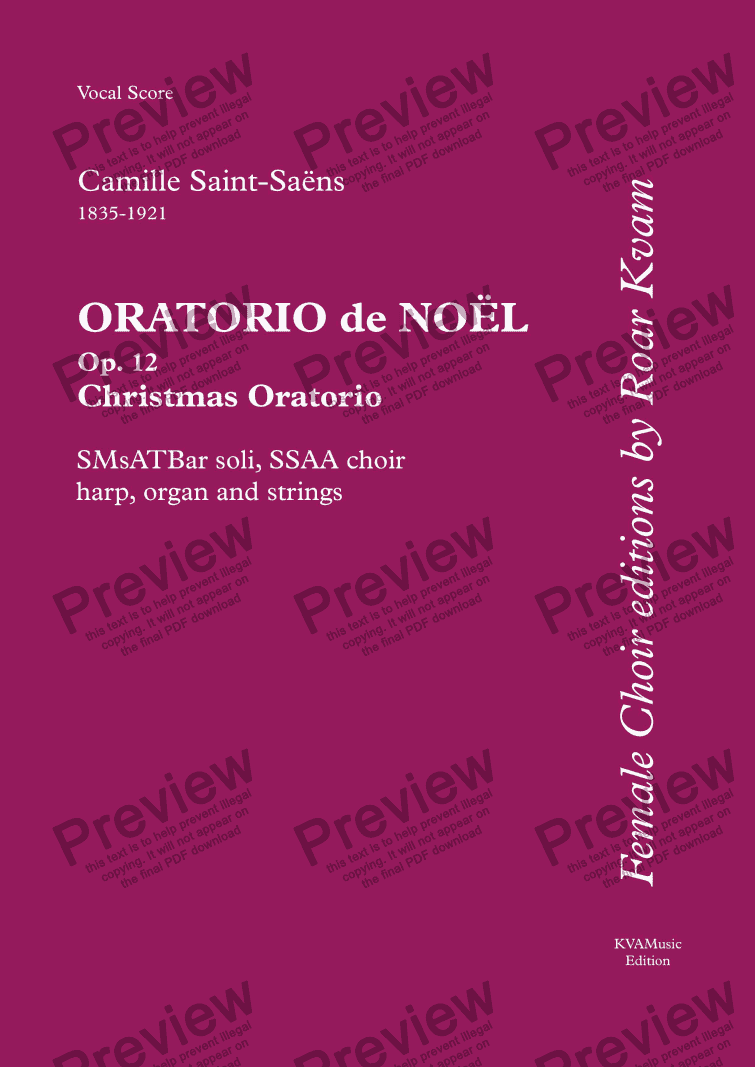 By: Camille Saint-Saëns
For: Choir + keyboard

Composer
Camille Saint-Saëns
Year of composition
1860
Lyricist
Bible
Publisher
KVAMusic Edition
Difficulty
Difficult (Grades 7+)
Duration
30 minutes
Genre
Classical music
License details
For anything not permitted by the above licence then you should contact the publisher first to obtain permission.

Charles-Camille Saint-Saëns (9 October 1835-16 December 1921) was a French composer, organist, conductor and pianist. He was a musical prodigy and made his concert debut at the age of ten. After studying at the Paris Conservatoire he followed a conventional career as a church organist, first at Saint-Merri, Paris and, from 1858, La Madeleine, the official church of the French Empire. After leaving the post twenty years later, he was a successful freelance pianist and composer, in demand in Europe and the Americas. As a young man, Saint-Saëns was enthusiastic for the most modern music of the day, particularly that of Schumann, Liszt and Wagner, although his own compositions were generally within a conventional classical tradition. He was a scholar of musical history, and remained committed to the structures worked out by earlier French composers. This brought him into conflict in his later years with composers of the impressionist and dodecaphonic schools of music; although there were neoclassical elements in his music, foreshadowing works by Stravinsky and Les Six, he was often regarded as a reactionary in the decades around the time of his death.

Sorry, there's no reviews of this score yet. Please .
In order to submit this score to ScoreExchange.com Roar Kvam has declared that they own the copyright to this work in its entirety or that they have been granted permission from the copyright holder to use their work. If you believe that this score should be not available here because it infringes your or someone elses copyright, please report this score using the copyright abuse form.