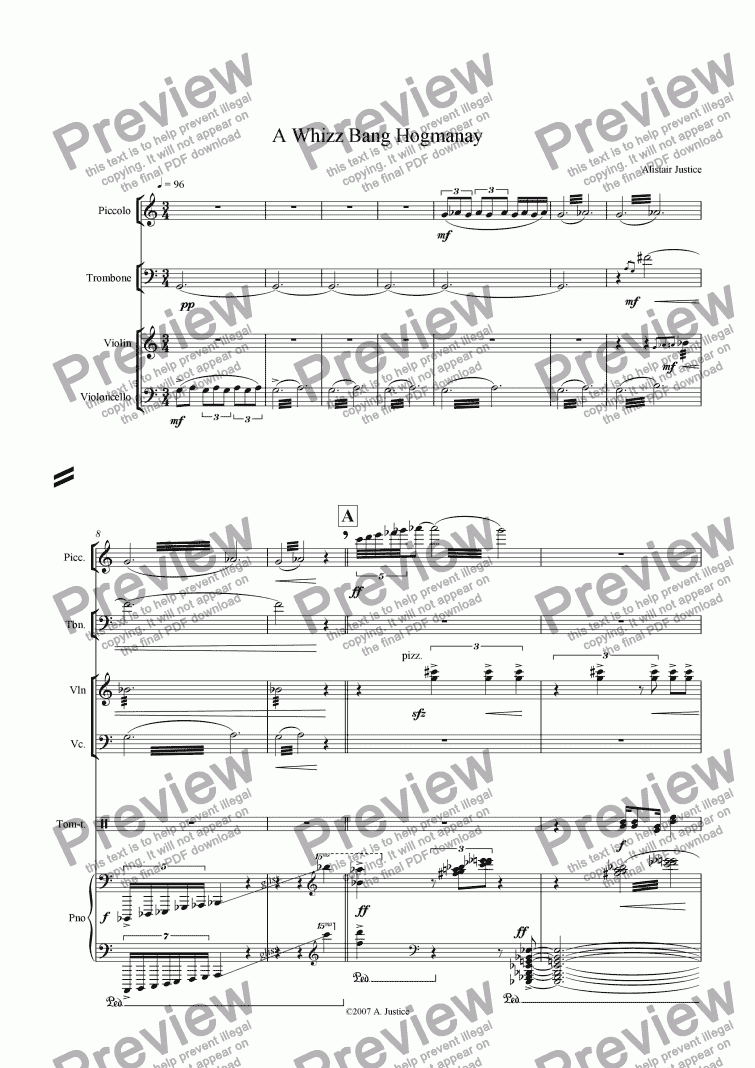 A Whizz Bang Hogmanay was written over the 2006-07 festive period and is a quasi-programmatic take on the Scottish New Year celebration of Hogmanay. In Edinburgh this celebration takes the form of approximately 100,000 people crowding onto Princes Street and waiting for the bells at midnight. When the time arrives, fireworks are launched from the seven hills of Edinburgh - this is the cue for the revellers to start singing Auld Lang Syne and to wish each other a happy new year. As most of the party-goers have been drinking for several hours by this point, the singing is not quite in tune and never in time�

A Whizz Bang Hogmanay evokes all this through several devices:

1) After a brief introduction the piano becomes the chiming bells - this chord (an Eb minor chord with an Eb major on top) has been used for centuries as the tuning harmonics for church bells (it also makes an inverted appearance at the end of Stravinsky�s Requiem Canticles). There are thirteen repetitions of this chord - this �mistake� is intentional! 2) The trombone, cello and descant recorder have a free variation on Auld Lang Syne. The variation is free because the rhythms are altered to sound out of time, and the instruments are only �in tune� with one another at the end of the section. This is mainly because the recorder is continually a semitone too low and the cello is tone deaf! 3) The violin, piccolo, percussion and high piano take their cue from the fireworks and are intentionally marked louder than the other instruments. 4) To end, the piece builds to a climax, then pauses a moment to allow the resonance to die away. After this the percussionist picks up a broom and slowly starts to sweep the floor as they move off-stage. In Edinburgh the smoke has hardly had chance to clear before the cleaners move in! Over the top of this there is a few stragglers still singing bits of Auld Lang Syne, but it is disconnectd and never in the same key. The piece finishes with a final tutti blast of Auld Lang Syne - the new year has begun.

In order to submit this score to ScoreExchange.com Alistair Justice has declared that they own the copyright to this work in its entirety or that they have been granted permission from the copyright holder to use their work. If you believe that this score should be not available here because it infringes your or someone elses copyright, please report this score using the copyright abuse form.

Reviews of A Whizz Bang Hogmanay