By: Edvard Grieg
For: Solo Solo Contrabass + piano
This music is in your basket
View basket
Loading... 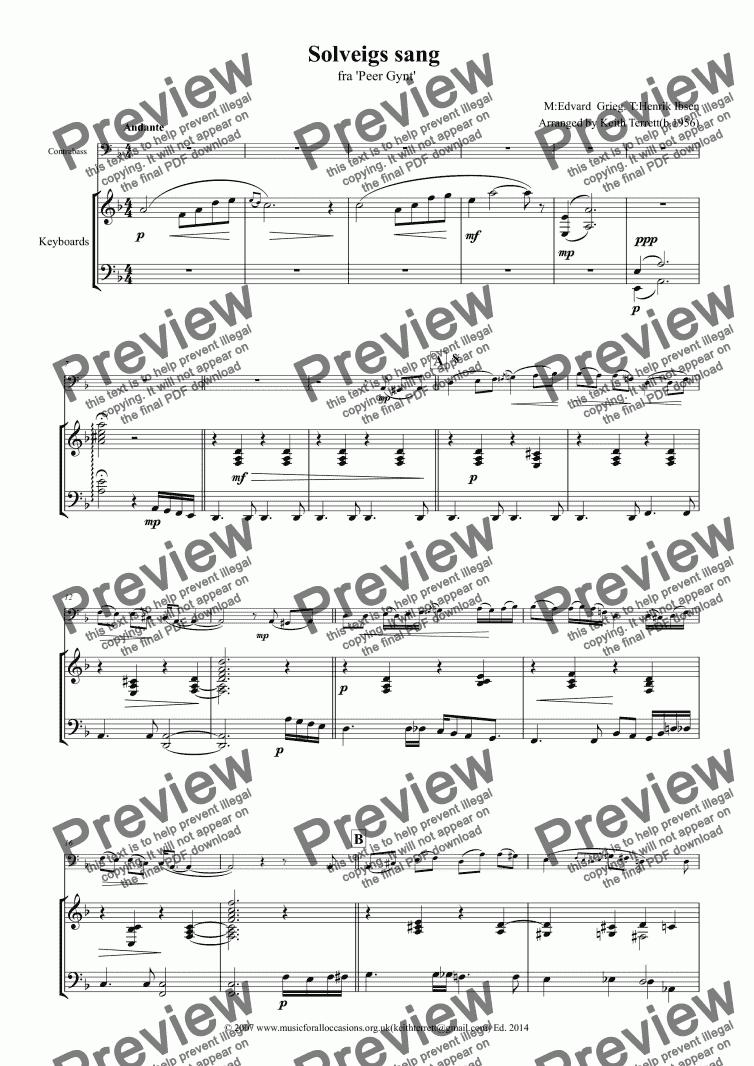 Composer
Edvard Grieg
Arranger
Keith Terrett
Publisher
Music for all Occasions
Difficulty
Difficult (Grades 7+)
Duration
3 minutes
Genre
Classical music
License details
For anything not permitted by the above licence then you should contact the publisher first to obtain permission.

An arrangement of Solveigs sang for Double Bass & Keyboard.

A nice work for your next concert or recital, to relax your audience with!

Ibsen asked Edvard Grieg to compose incidental music for the play. Grieg composed a score that plays approximately ninety minutes. Grieg extracted two suites of four pieces each from the incidental music (Opus 46 and Opus 55), which became very popular as concert music. Only one of the sung parts of the incidental music ended up in these suites (the last part of 2nd suite, Solveig’s Song, the solo part now played by violin rather than sung, though the vocal version is sometimes substituted). (Originally, the second suite had a fifth number, The Dance of the Mountain King’s Daughter, but Grieg withdrew it.) Grieg himself declared that it was easier to make music "out of his own head" than strictly following suggestions made by Ibsen. For instance, Ibsen wanted music that would characterize the "international" friends in the fourth act, by melding the said national anthems (Norwegian, Swedish, German, French and English). Reportedly, Grieg did not have the right temperament for this task.

The music of these suites, especially "Morning Mood" starting the first suite, "In the Hall of the Mountain King", and the string lament "Aase’s Death" later reappeared in numerous arrangements, soundtracks, etc.

Here you will find an original solo entitled ’A Bassist goes Ballroom Dancing’ and Czardas!