Music for the Organs of the Cathedral of Mexico City

By: Michael Drewes
For: Solo instrument (Organ [manuals])
This music is in your basket
View basket
Loading... 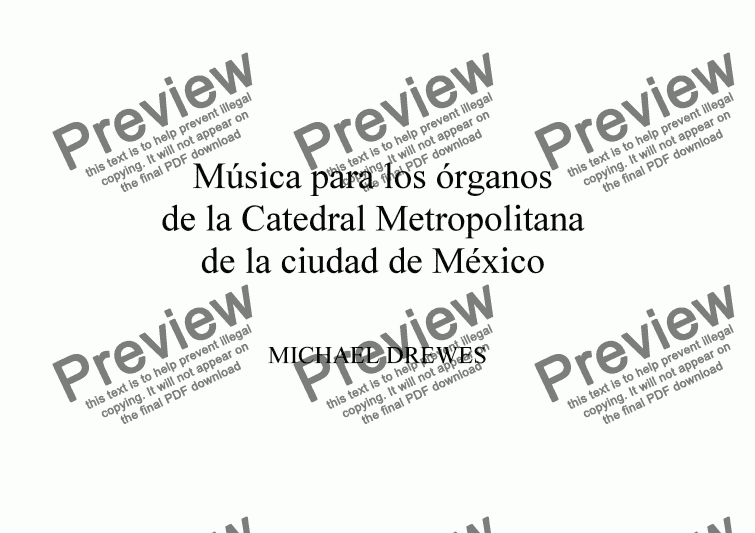 Music for the Organs of the Cathedral of Mexico City

Composer
Michael Drewes
Year of composition
1978
Difficulty
Difficult (Grades 7+)
Duration
20 minutes
Genre
Classical music
License details
For anything not permitted by the above licence then you should contact the publisher first to obtain permission.

Architect Jaime Ortiz Lajous was in charge of the restoration works of the Cathedral of Mexico City during the late seventies. I worked under him and supervised the dismantling and reassembling of the two organs, one, of 1695, and the other, of 1735, when they were restored by Flentrop Orgelbouw B.V. in Zaandam, Holland. Once they were functional again, Ortiz Lajous commissioned me to play them daily for their maintenance. This was an extraordinary gift that furthered my musical career, and now, I can present the fruits of it, namely, compositions for these great instruments. Each one of the organs has two keyboards, the range of which is from C to d’’’ in 49 keys, with mechanical action. A break occurs between c’ and c#’ of the bass and treble sides. The organ of 1695 (imported from Spain and assembled in Mexico in its time) possesses an additional solo keyboard with a range from c’ to d’’’. The pieces can be played on European Baroque organs without any problems, as far as the pedal is concerned. Not so, however, on the organs of the Cathedral of Mexico City, because their pedal is very rudimentary. It consists only of ten keys in the "short octave", C, D, E, F, F#, G, G#, A, Bb and B. It responds very slowly and can definitely not be used for fancy bass figures. Nevertheless, the pieces sound great even without pedal. When playing in the Cathedral of Mexico City, "Praeludium" of 28 August 1978, "Marcia degli Pellegrini", "Peque���studio", "Toccata in primo tono" and "Toccata in secondo tono" can be performed with pedal without problems.