Eternal Father Strong to Save (Naval hymn) for Wind Quartet/Quintet

By: John Bacchus Dykes
For: Wind quartet
This music is in your basket
View basket
Loading... 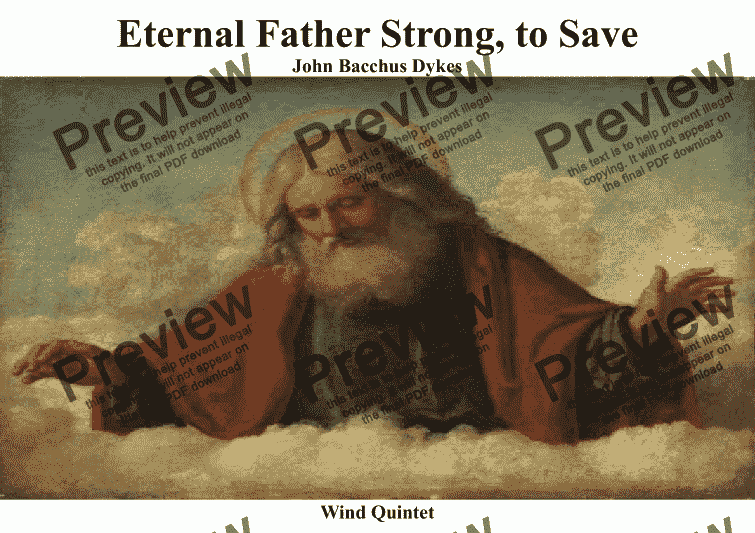 Eternal Father Strong to Save (Naval hymn) for Wind Quartet/Quintet

Composer
John Bacchus Dykes
Year of composition
1821
Arranger
Keith Terrett
Year of arrangement
2006
Publisher
Music for all Occasions
Difficulty
Moderate (Grades 4-6)
Duration
1 minute
Genre
Classical music
License details
For anything not permitted by the above licence then you should contact the publisher first to obtain permission.

A new arrangement of this popular hymn set for Wind Quartet or Quintet.

An excellent hymn for Naval or Fisherman’s funerals, and it was used in the film The Perfect Storm.

"Eternal Father, Strong to Save": The Navy Hymn

The song known to United States Navy men and women as the "Navy Hymn," is a musical benediction that long has had a special appeal to seafaring men, particularly in the American Navy and the Royal Navies of the British Commonwealth and which, in more recent years, has become a part of French naval tradition.

The original words were written as a hymn by a schoolmaster and clergyman of the Church of England, the Rev. William Whiting. Rev. Whiting (1825-1878) resided on the English coast near the sea and had once survived a furious storm in the Mediterranean. His experiences inspired him to pen the ode, "Eternal Father, Strong to Save." In the following year, 1861, the words were adapted to music by another English clergyman, the Rev. John B. Dykes (1823-1876) , who had originally written the music as "Melita" (ancient name for the Mediterranean island of Malta). Rev. Dykes’ name may be recognized as that of the composer given credit for the music to many other well-known hymns, including "Holy, Holy, Holy," "Lead, Kindly Light," "Jesus, Lover of My Soul," and "Nearer, My God to Thee."

In the United States, in 1879 the late Rear Adm. Charles Jackson Train, an 1865 graduate of the United States Naval Academy at Annapolis was a lieutenant commander stationed at the Academy in charge of the Midshipman Choir. In that year, Lt. Comdr. Train inaugurated the present practice of concluding each Sunday’s Divine Services at the Academy with the singing of the first verse of this hymn.

The hymn, entitled "Eternal Father, Strong to Save," is found in most Protestant Hymnals. It can be more easily located in these hymnals by consulting the "Index to First Lines" under "Eternal Father, Strong to Save." The words have been changed several times since the original hymn by Rev. Whiting was first published in 1860-61. One will find that the verses as now published differ from the original primarily in the choice of one or two words in several lines of each verse. However, inasmuch as it is not known whether the original words are now available in a hymnal.