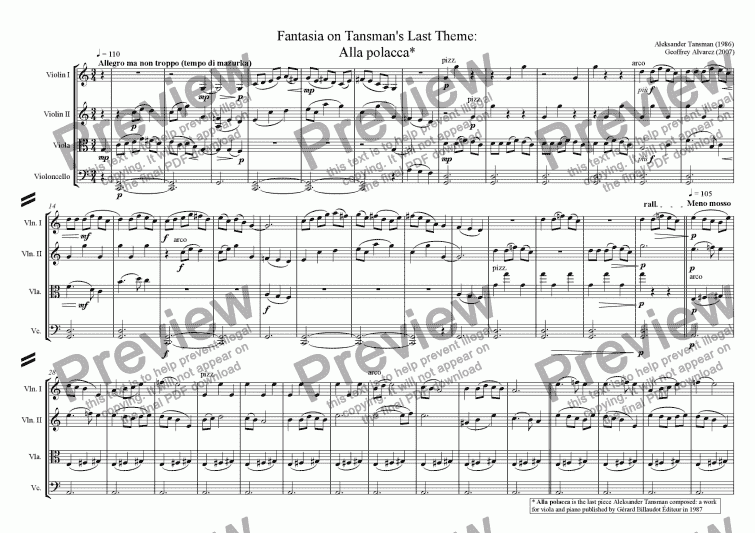 This is a fantasia based on Alla Polacca by Aleksander Tansman, a late work originally for viola and piano, very much in the style of his early period, rather than his other mature music. In general, the late period was influenced by many sources, from the folk music of his native Poland to the counterpoint of Bach, ethnic music from all over the world, polytonality and even serialism.

The publisher of the piece from which the theme is taken, GERARD BILLAUDOT EDITEUR S. A. has granted me written permission to use the theme.

Mesdames Mireille Tansman Zanuttini and Marianna Tansman Martinozzi, Tansman's daughters, have given their support to the project and have also been very helpful in initially granting permission to use their father's music. These two ladies are largely responsible for maintaining the invaluable resource for researchers into the music of Tansman: Les Amis d'Alexandre Tansman based at the Parisien home of their illustrious father. The work is dedicated to them in gratitude and friendship.

In order to submit this score to ScoreExchange.com Geoffrey Alvarez has declared that they own the copyright to this work in its entirety or that they have been granted permission from the copyright holder to use their work. If you believe that this score should be not available here because it infringes your or someone elses copyright, please report this score using the copyright abuse form.