Concerto Espagnole for guitar and two flutes, oboe and strings, Op. 20 - I. Pastorale 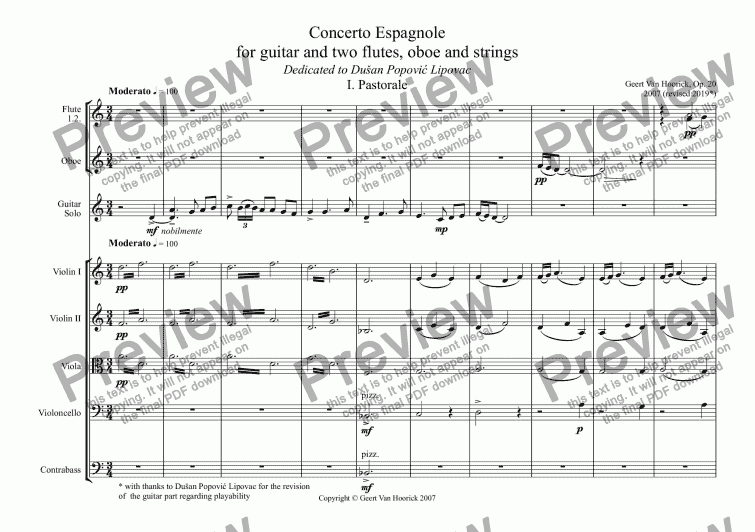 This is a modern-classical concerto for guitar and small orchestra, dating from 2007-2008. It has, concerning the style and character of the music, much in common with my also very Spanish-like Harp concerto of 2010. The 1st movement is moderately fast and in sonata form; it has a pastoral atmosphere. The 2nd movement is slow and in Lied form, with two themes and a middle section; the main theme is very tender and is first presented by the guitar. The 3rd (and final) movement is fast and in an extended rondo form (ABACADABA); the main theme is toccata-like. Digital performance using Sibelius 4 and Kontakt Player Gold (from an earlier version). A moving score video is on my YouTube-channel. This guitar concerto is dedicated to Dušan Popović Lipovac. It has been arranged and performed by Dušan Popović Lipovac, accompanied by AcademX orchestra, on 15th February 2013 in Novi Sad, Serbia. This performance is on YouTube. Dušan Popović Lipovac therefore has made an arrangement of the guitar part of the 1st movement (with fingering etc.), which I have separately uploaded on Scoreexchange and IMSLP. In 2019 I revised the guitar part of all movements based on what I learned from his arrangement of the 1st movement, his performance of the other movements, and my own meanwhile more advanced knowledge about guitar writing. I made also some changes in the cadenza of the 1st movement.

In order to submit this score to ScoreExchange.com Geert Van Hoorick has declared that they own the copyright to this work in its entirety or that they have been granted permission from the copyright holder to use their work. If you believe that this score should be not available here because it infringes your or someone elses copyright, please report this score using the copyright abuse form.

Reviews of Concerto Espagnole for guitar and two flutes, oboe and strings, Op. 20 - I. Pastorale