By: Nic Bullivant
For: Large mixed ensemble
This music is in your basket
View basket
Loading... 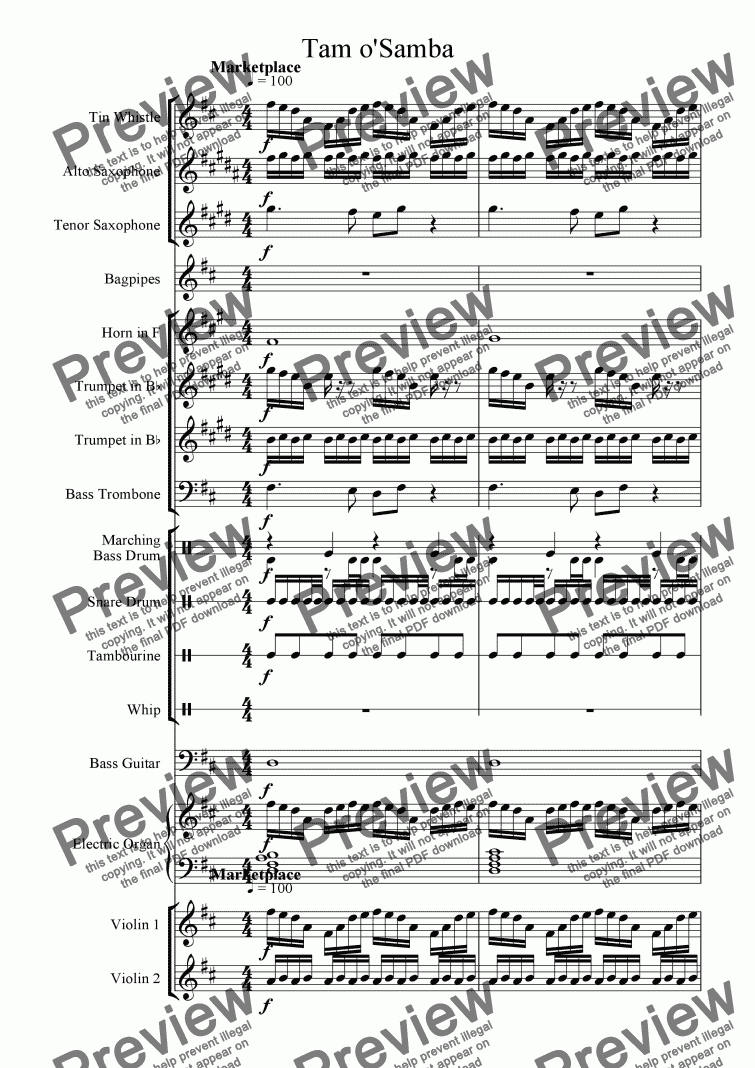 Composer
Nic Bullivant
Year of composition
2007
Lyricist
Robert Burns
Difficulty
Moderate (Grades 4-6)
Duration
8 minutes
Genre
Other
License details
For anything not permitted by the above licence then you should contact the publisher first to obtain permission.

Tam O'Shanter is Scottish national bard's Robert Burns most popular comic poem, telling of the time Tam (Tom) spent the time drinking after market day while a thunderstorm brewed outside. Eventually, the hero, very much the worse for drink mounts his horse and rides off into the storm. On the way home, his attention is caught by lights in the old haunted church of Alloway, and he watches in disbelief and growing admiration a witches dance until, beside himself, he calls out "Weel Done Cutty Sark!" (the only lyrics in the piece), at which the witches chase him for his life until he crosses the arch of the bridge over the nearby river.

The challenge was to set this piece for a Burns and Brass event next January in Carr-Bridge, Inverness-shire to be played by the Carrumba Samba Band and assorted brass instrumentalists and fiddlers and - the ultimate challenge - the Great Highland Bagpipes.

The drums are VERY loud, their sound quality not well reflected on my MIDI, so I used marching band bass for the sirdu and side drum for the repannik and tambourine for the shakers. There should also be a whip and a thunder sheet.

Against this racket the fiddles have no chance, so they need space to be heard. Even the brass won't come through. The only thing that can overpower the might of the Carrumba drums is the Great Highland Bagpipe, and they are fairly inflexible about the key they play in - B flat major, a key which the whistles and strings don't like much. So look out for some pretty outrageous key changes as the tonality lurches from one group of instruments to the other.

Add to this the fact that the band plays and improvises from memory, you have plenty of scope for ragged entries and extra cross-rhythms. So the instruments are usually introduced to new sections of the score one or a few at a time.

I have used four Scottish tunes: The Maid Behind the Bar, The Black Bear, The High Road to Linton and Aird Ranters, and spot the non-Scottish tune in there too. It's a riot. NMB.

Sorry, there's no reviews of this score yet. Please .
In order to submit this score to ScoreExchange.com Nic Bullivant has declared that they own the copyright to this work in its entirety or that they have been granted permission from the copyright holder to use their work. If you believe that this score should be not available here because it infringes your or someone elses copyright, please report this score using the copyright abuse form.