By: Sir Edward Elgar
For: Choir
This music is in your basket
View basket
Loading... 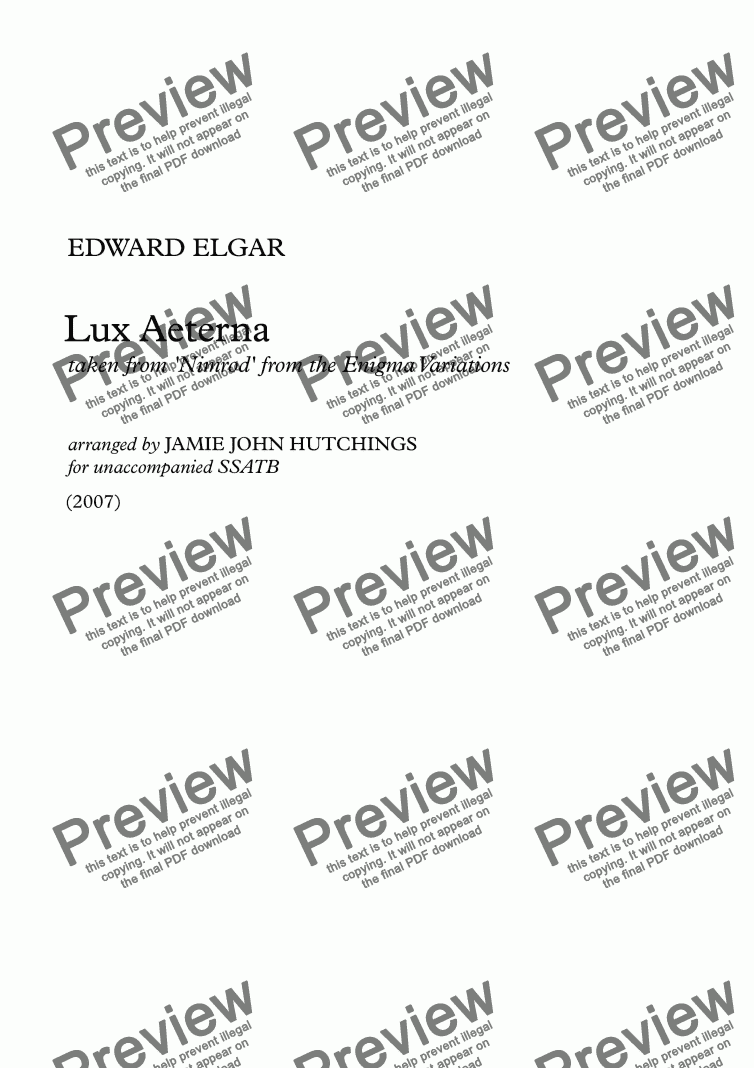 By: Sir Edward Elgar
For: Choir

Composer
Sir Edward Elgar
Year of composition
1899
Arranger
Jamie John Hutchings
Lyricist
Communion antiphon from the Mass for the Dead
Difficulty
Moderate (Grades 4-6)
Duration
4 minutes
Genre
Classical music
License details
For anything not permitted by the above licence then you should contact the publisher first to obtain permission.

This year sees the celebrations for the 150th anniversary of the birth of Sir Edward Elgar, and amongst his greatest compositions lie the Enigma Variations "the supreme example of how to elaborate in so many different ways upon a simple theme". Indeed, he dedicated the work "to my friends pictured within", each variation being an affectionate portrayal of one of his circle of close acquaintances.

The ninth variation, Nimrod, is here arranged for voices - not the first to do so. It is dedicated to Augustus J. Jaeger, Elgar’s best friend. It is said that this variation, as well as an attempt to capture what Elgar saw as Jaeger’s noble character, depicts a night-time walk the two of them had, during which they discussed the slow movements of Ludwig van Beethoven (the first eight bars represent the beginning of Beethoven’s Pathetique Sonata). The name of the variation punningly refers to an Old Testament patriarch described as a mighty hunter, the name Jaeger being German for hunter. The text is the Communion antiphon from the Mass for the Dead.

Sorry, there's no reviews of this score yet. Please .
In order to submit this score to ScoreExchange.com Jamie John Hutchings has declared that they own the copyright to this work in its entirety or that they have been granted permission from the copyright holder to use their work. If you believe that this score should be not available here because it infringes your or someone elses copyright, please report this score using the copyright abuse form.