By: Robert Schumann
For: Double reed ensemble
This music is in your basket
View basket
Loading... 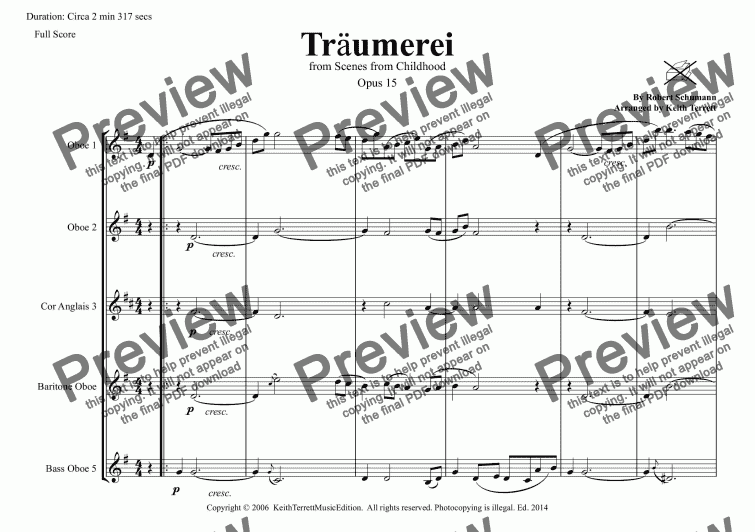 Composer
Robert Schumann
Arranger
Keith Terrett
Publisher
Music for all Occasions
Difficulty
Difficult (Grades 7+)
Duration
1 minute
Genre
Classical music
License details
For anything not permitted by the above licence then you should contact the publisher first to obtain permission.

An arrangement of Robert Schumann’s delightful ’Traumerei’, from his Scenes from Childhood’, transcribed for Oboe Consort.

Robert Schumann, sometimes given as Robert Alexander Schumann, (8 June 1810 – 29 July 1856) was a German composer, aesthete and influential music critic. He is one of the most famous Romantic composers of the 19th century.

He had hoped to pursue a career as a virtuoso pianist, having been assured by his teacher Friedrich Wieck that he could become the finest pianist in Europe after only a few years of study with him. However, a self-inflicted hand injury prevented those hopes from being realized, and he decided to focus his musical energies on composition. Schumann’s published compositions were all for the piano until 1840; he later composed works for piano and orchestra, many lieder (songs for voice and piano), four symphonies, an opera, and other orchestral, choral and chamber works. His writings about music appeared mostly in the Neue Zeitschrift für Musik (’The New Journal for Music’), a Leipzig-based publication that he jointly founded.

In 1840, after a long and acrimonious legal battle with his piano instructor (Wieck), Schumann married Wieck’s daughter, pianist Clara Wieck, who also composed music and had a considerable concert career, including premieres of many of her husband’s works.

Robert Schumann died in middle age; for the last two years of his life, after an attempted suicide, he was confined to a mental institution at his own request.

Reviews of Träumerei for Oboe Consort