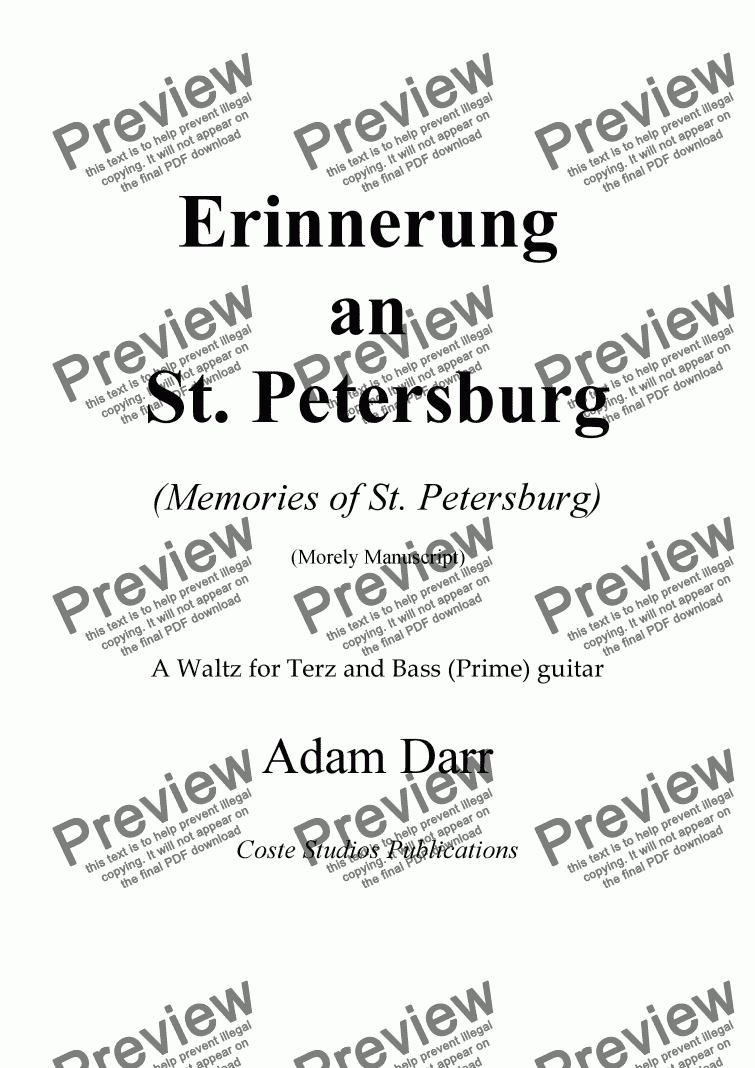 Erinerung an St. Petersburg is one of Adam Darr’s (1811-1866) finer concert works for guitar duo. To my knowledge it has never been published. I recently acquired several guitar duos of Darr’s in manuscript from the Morley Harp Company of England. How they came to acquire the manuscript is not known. Among the works is the Terz guitar part. I have based this scoring on the Morley manuscript. Warning the accompaniment of the third variation is my composition. For this to be a memory of St. Petersburg, Russia, it would have to have been composed after 1840, when Darr returned to his homeland. Darr also wrote a work for solo zither with a similar title, Souvenir de Petersbourg Fantasie elegante. This work, however, is a completely different concert piece. The two works do, however, use the Russian folksong "The Scarlet Sarafan." The zither piece is arranged in duple time and the guitar duo uses triple.

The work is for Terz guitar and "Bass" guitar. If a Terz guitar is not available then a capo at the third fret will work. Darr understood the term "Bass" guitar to be the accompaniment or lower guitar tuned a full step lower, D, G, C, F, A, D. Darr’s "Bass" guitar also probably had several floating bass strings whose pitches were lower than the sixth string of today’s standard tuning. If you are playing on a modern instrument you can transpose any note that exceeds the standard compass up an octave. This unusual concert work will surely please any audience and although the bass part is purely accompanimental, it is very expressive and enjoyable to perform.

Reviews of Erinnerung an St. Petersburg