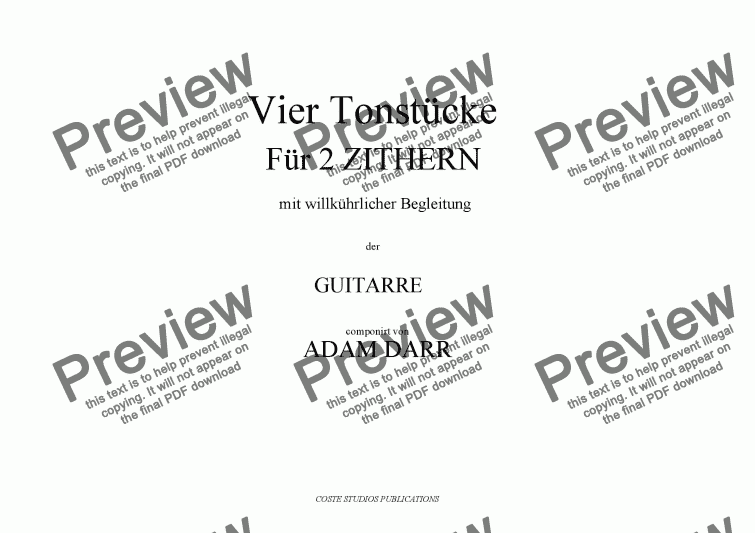 Vier Tonstücke, for two zithers with arbitrary accompaniment of the guitar, is a set of four pieces that was probably written for the home entertainment consumer. The Nocturne, Waltzer, Rondino, and Andante are well-crafted examples of Darr's expressive style. Toward the end of his life, Darr put a lot of effort into composing music for the zither. It appears that he was attempting to write music that would change the role of the instrument from that of folk zither into an instrument for the concert or at least the salon. The guitar part is really an optional part and is quite easy. If the guitar is used, much of the music on the zither's bass clefs can be safely omitted. Zither players need to be aware that Darr's zither tuning is different that of today's modern instrument. For a historically accurate performance string #10 must be tuned and octave higher, while strings # 17, 19, and 22 must be tuned an octave lower than today's tuning standard. For more information on Darr see my DMA research paper "ADAM DARR (1811-1866) THE CAREER AND WORKS OF A GERMAN ROMANTIC GUITARIST AND ZITHERIST."

Guitar, Zither I and Zither II

Guitar, Zither I and Zither II