By: trad.
For: Solo Soprano Saxophone + piano
This music is in your basket
View basket
Loading... 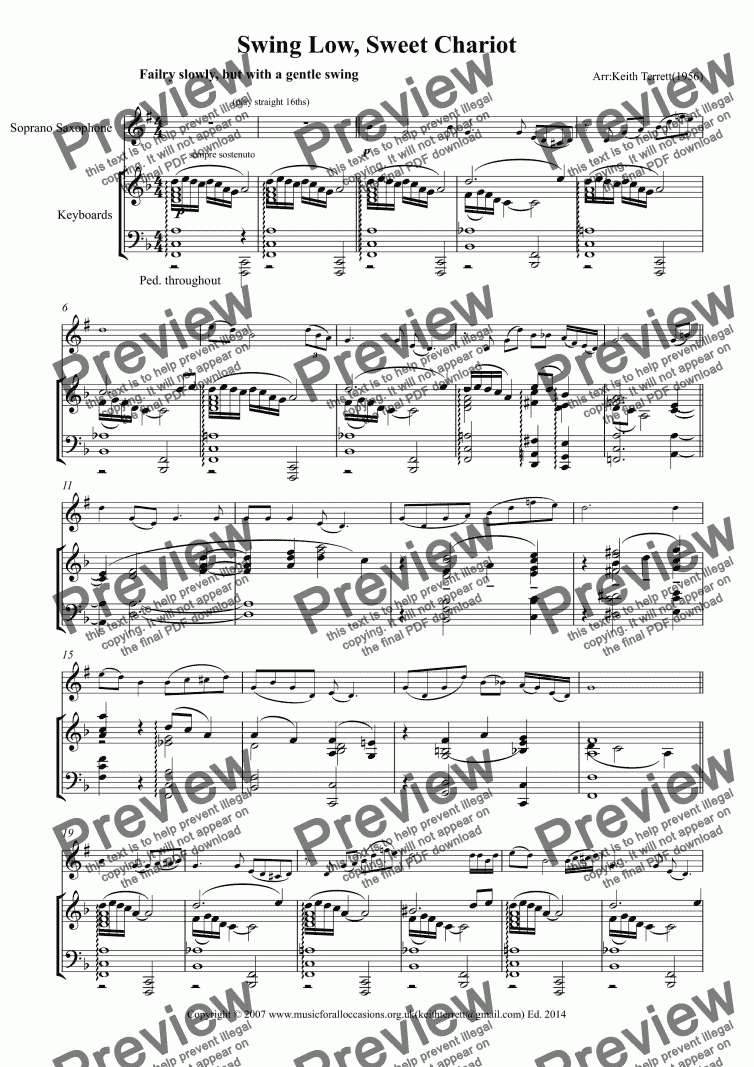 Composer
trad.
Arranger
Keith Terrett
Publisher
Music for all Occasions
Difficulty
Difficult (Grades 7+)
Duration
2 minutes
Genre
Jazz music
License details
For anything not permitted by the above licence then you should contact the publisher first to obtain permission.

An arrangement of Swing Low for Bb Soprano Saxophone and Keyboard.

"Swing Low, Sweet Chariot" is an American Negro spiritual. The first recording was by the Fisk Jubilee Singers in 1909. In 2002, the Library of Congress honored the song as one of 50 recordings chosen that year to be added to the National Recording Registry. It was also included in the list of Songs of the Century, by the Recording Industry Association of America and the National Endowment for the Arts.

While sung primarily in Protestant churches and in concerts throughout the United States, it also has a large association with English rugby union and is also regularly sung at England national rugby union team matches. It is sometimes called "Coming for to carry me home".

It is not to be confused with "Swing Down Sweet Chariot", a different spiritual recorded by Elvis Presley and others.

"Swing Low, Sweet Chariot" was composed by Wallis Willis, a Choctaw freedman in the old Indian Territory, sometime before 1862. He was inspired by the Red River which reminded him of the Jordan River and of the Prophet Elijah being taken to heaven by a chariot. Some scholars (see Songs of the underground railroad) believe this song and "Steal Away to Jesus"�also composed by Willis�had some hidden lyrics referring to the Underground Railroad.

Alexander Reid, a minister at a Choctaw boarding school, heard Willis singing these two songs and transcribed the words and melodies. He sent the music to the Jubilee Singers of Fisk University in Nashville, Tennessee. The Jubilee Singers then popularized the songs during a tour of the United States and Europe.

The song enjoyed a resurgence during the 1960s Civil Rights struggle and the folk revival; it was performed by a number of artists, perhaps most famously during this period, by Joan Baez during the legendary 1969 Woodstock festival.

The song was adopted by England rugby union fans during the last match of the 1988 season.

Lyrics are as follows: